Accessibility links
Mother And Daughter Injured In Boston Bombing Face New Future : Shots - Health News As victims of the Boston Marathon bombings leave the hospital or prepare to, their stories are beginning to pour out. Celeste Corcoran and her daughter, Sydney, both suffered grievous leg injuries. Their accounts give a fuller toll of the attack and the challenges that lie ahead. 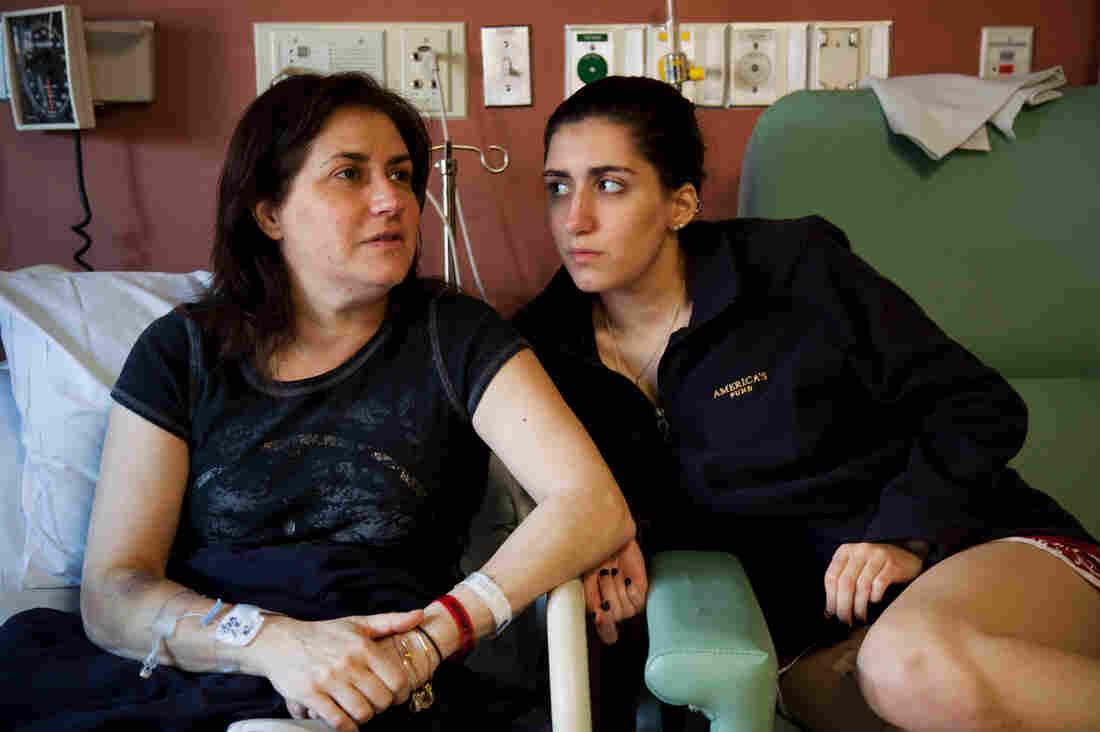 Celeste Corcoran and her daughter, Sydney, were injured in the Boston Marathon bombings. Ellen Webber for NPR hide caption

Forty-seven-year-old Celeste Corcoran is propped up in her hospital bed. In a nearby window is a forest of blooming white orchids from well-wishers. On the opposite wall, a big banner proclaims "Corcoran Strong."

She's recalling how thrilled she was to be near the finish line of the Boston Marathon, waiting for her sister Carmen Accabo to run by. "I just remember standing there, wanting to be as close as I could to catch her," Corcoran says. "I really just needed to see her face."

And then the first of the two bombs went off, throwing Celeste Corcoran off her feet. The noise was deafening — it blew out both her eardrums. 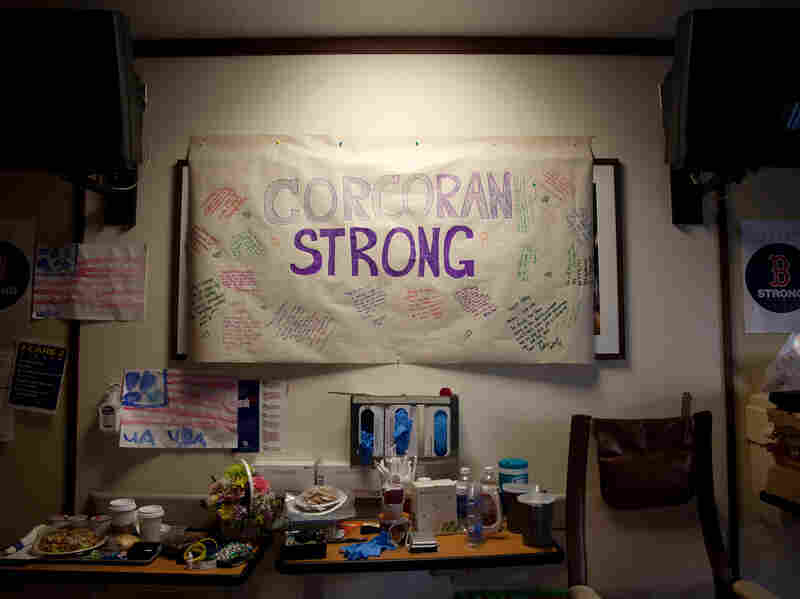 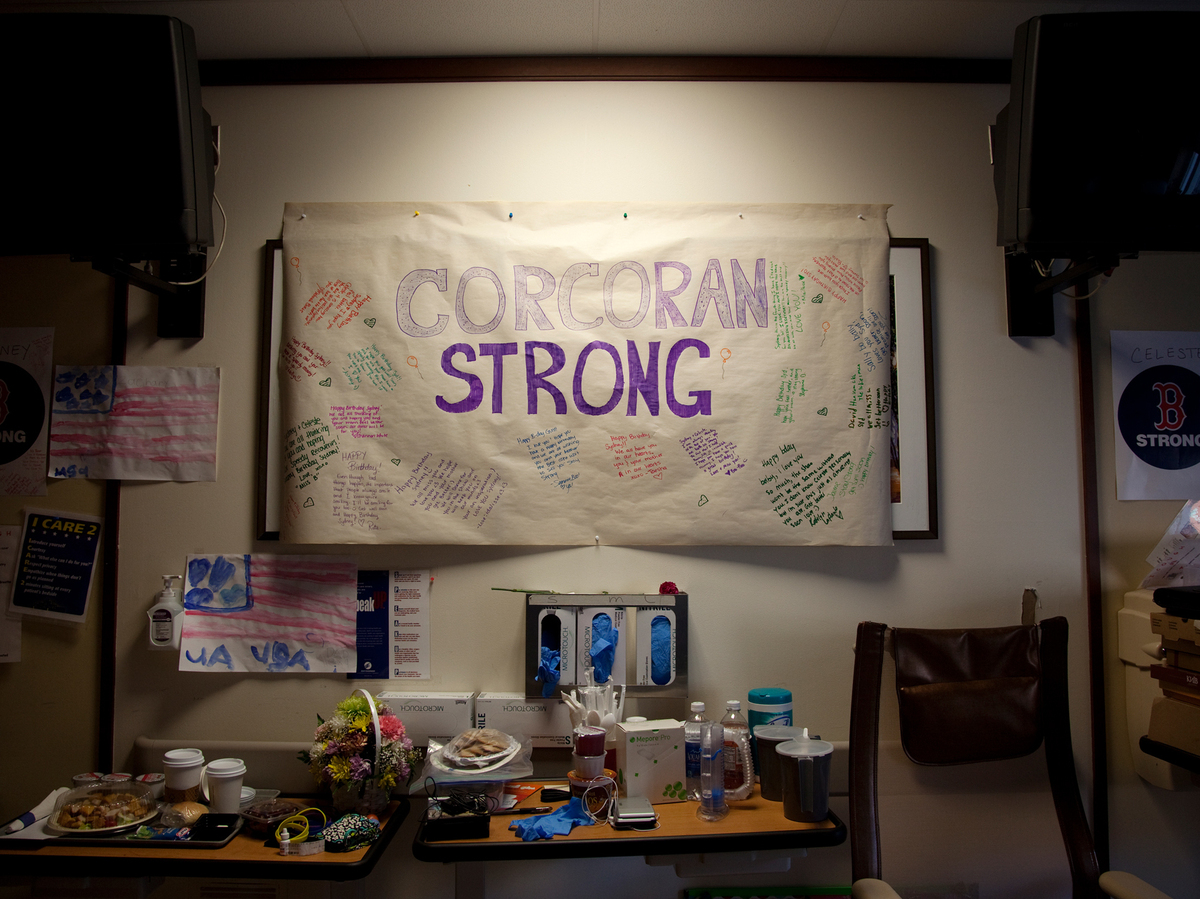 A banner reading "Corcoran Strong" hangs on the wall of Celeste and Sydney's hospital room.

"I just remember looking down and seeing my legs," Corcoran remembers. "I really just saw blood and bone. My foot was off at an odd angle. I remember lying there and saying 'no' over and over. Like, 'No. No. This couldn't have happened. No.' "

The story of Celeste Corcoran and her daughter Sydney, who also suffered a grievous leg injury on April 15, is one of many harrowing tales beginning to pour out as victims of the bombing recover enough to give testimony.

Each narrative gives a deeper appreciation of the damage wrought by the Marathon Day terror.

Corcoran, who never lost consciousness through the ordeal, prepared for the worst as she lay on the bloody pavement, grit in her mouth, on her face and in her auburn hair.

But that was just a fleeting thought.

"Because then almost immediately ... I think I shocked myself thinking 'I just want to die.' Then I was just sort of like, 'Seriously, I do not want to die. I've got so much to do. I've got my kids. I have my life. I have my husband.' There was no way I wanted to die."

It was the first of three turning points Celeste Corcoran had over the past two and a half weeks.

Her husband, Kevin Corcoran, knelt beside her on the pavement, offering reassurance as he ripped off his belt, borrowed another from a stranger nearby and wrapped tourniquets around his wife's profusely bleeding legs.

Before she got in the ambulance, she asked Kevin if her feet were still attached to her legs. He said yes. That planted the hope that she would keep her legs.

At this point, the Corcorans thought their 18-year-old daughter, Sydney, was somewhere safe, away from the bombs, watching the race with friends.

But in fact, Sydney lay not far away from where her mother fell. She didn't know where her parents were. She saw no one familiar. She looked down to see blood gushing from a gaping wound on her right thigh. 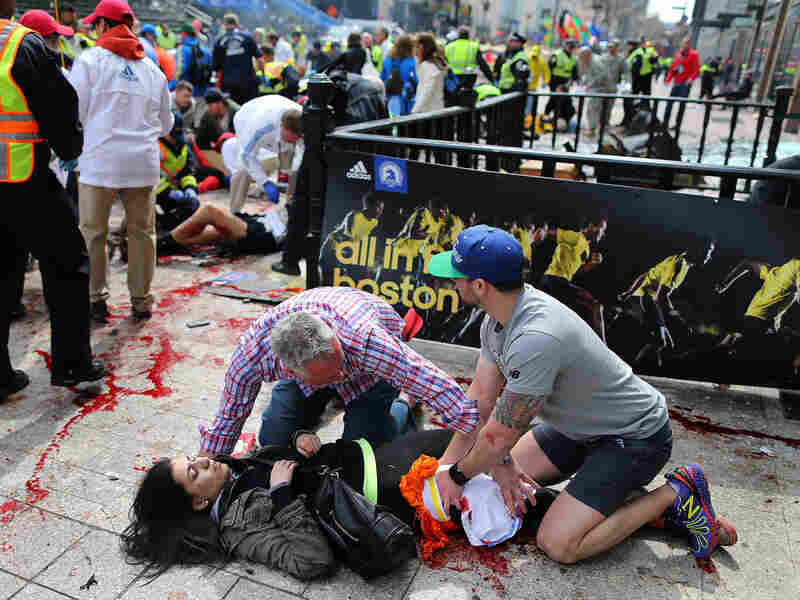 Bystanders help Sydney Corcoran at the scene of the first explosion near the finish line of the 117th Boston Marathon. John Tlumacki/Boston Globe via Getty Images hide caption 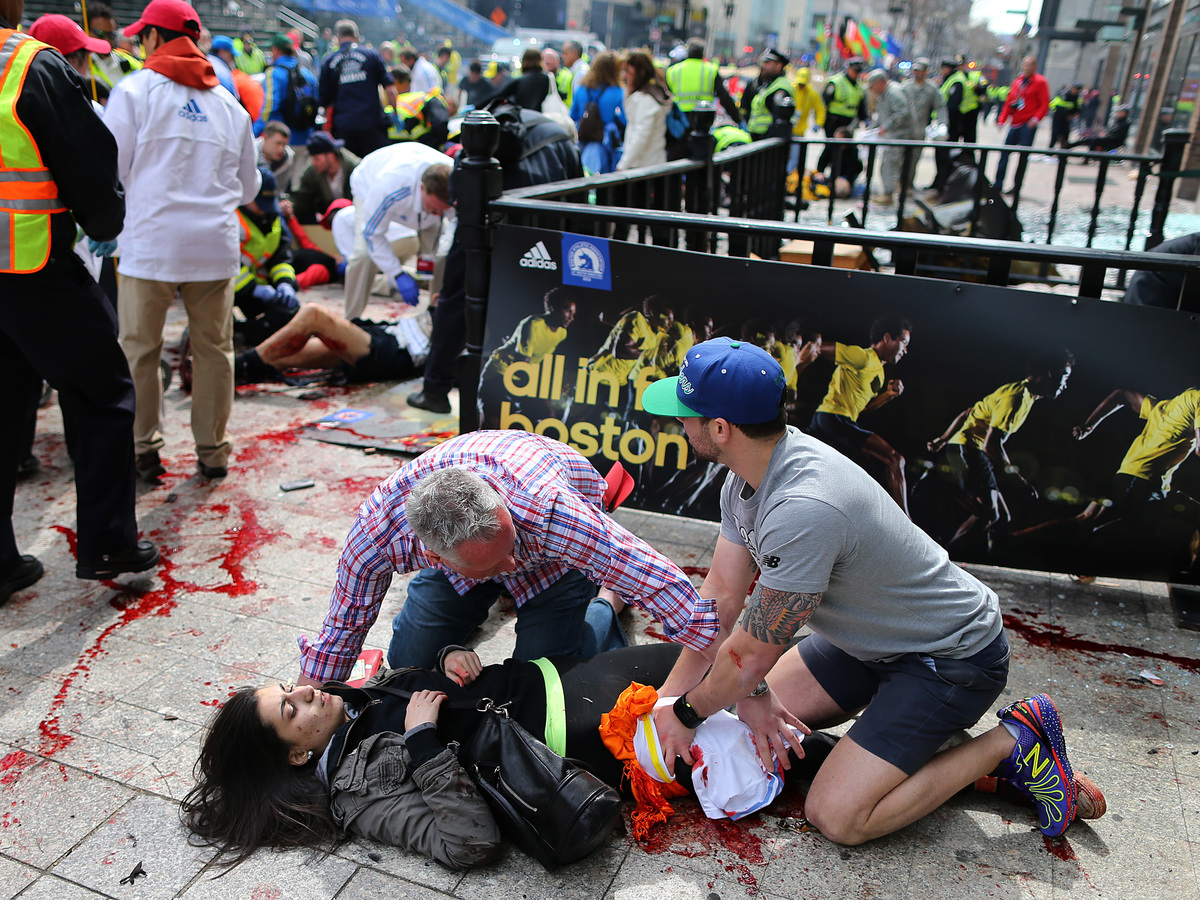 Bystanders help Sydney Corcoran at the scene of the first explosion near the finish line of the 117th Boston Marathon.

"I remember being in panic and trying to ask someone, anyone, if I was going to be able to keep my leg," Sydney says.

But soon her panic was replaced by overwhelming fatigue.

Unbeknownst to Sydney, her mother was on her way to Boston Medical Center, a mile away. There Celeste's hope that she could keep her legs was dashed by a doctor who said they'd have to be amputated.

While Celeste was in surgery, a doctor figured out that a young woman with dark hair, large brown eyes and a mangled leg was her daughter.

A piece of shrapnel from the bomb had severed a major blood vessel in her right thigh. A good Samaritan had applied steady pressure to her leg at the bombing site, so she didn't bleed out and die on the pavement.

And doctors were able to save Sydney's leg.

Mother and daughter ended up in the same recovery room, where a doctor told a groggy Celeste that her daughter was safe. Soon after, they woke in side-by-side hospital beds.

Over the next week, Celeste had three more operations to remove shrapnel and damaged tissue from her legs so her wounds could be closed.

The ordeal was wearing her down. "I felt very weak. I had just gone through my last surgery," she recalls. "I still hadn't washed my hair. You know, the bomb debris and shrapnel and smell and everything was still in my hair."

That was the second turning point — a time when her usually resilient spirit flagged as the reality of how her life had utterly changed began to sink in.

"I knew I was going to live and I was very grateful for that," she says. "But I really was very discouraged about what my quality of life was going to be. I love going to the beach. That soothes me and really calms my spirit. And I remember lying here crying and thinking I wasn't going to be able to do that." 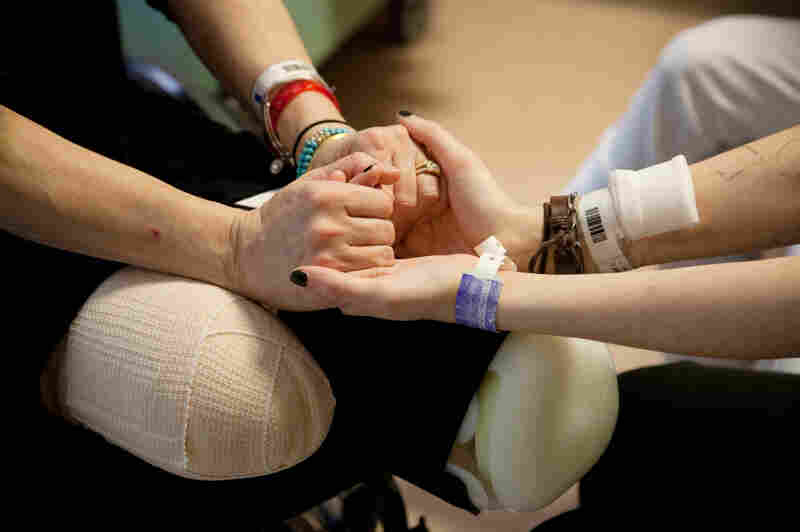 Doctors had to amputate both of Celeste's legs because damage from the first bomb blast was so severe. Ellen Webber for NPR hide caption 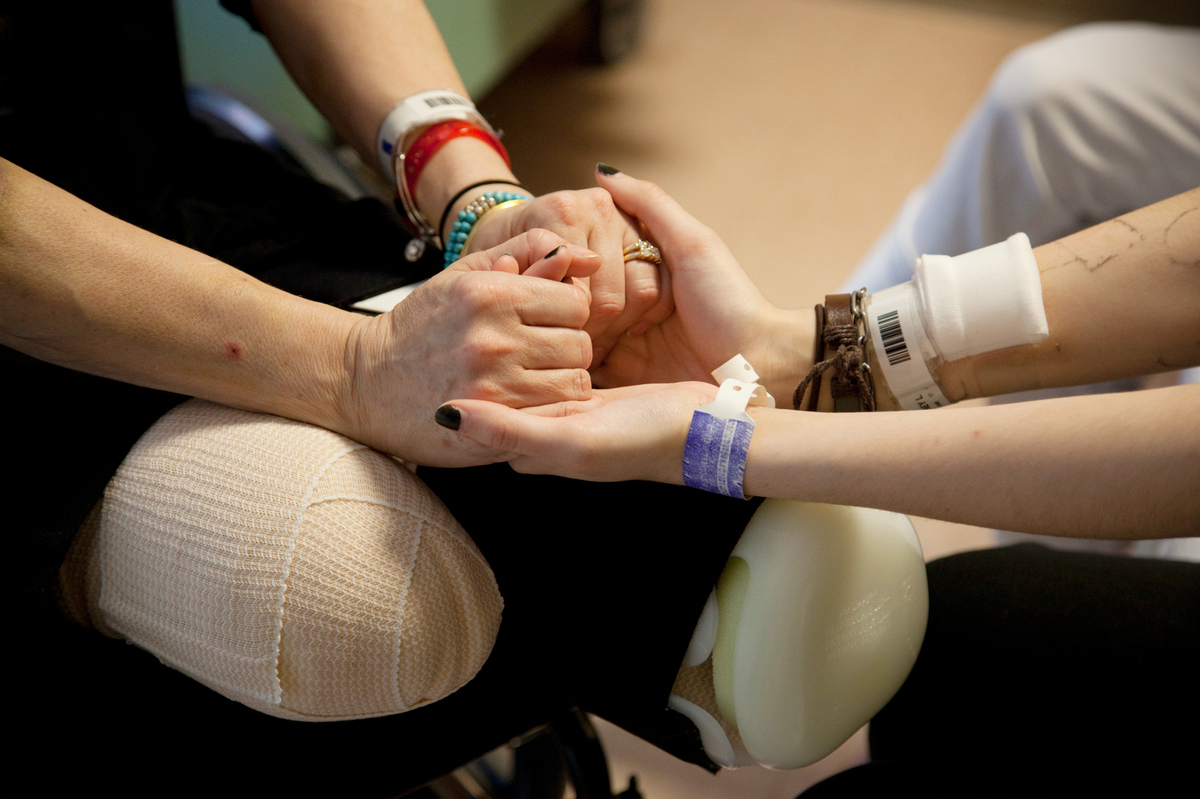 Doctors had to amputate both of Celeste's legs because damage from the first bomb blast was so severe.

She also began to hate the way she had to depend on someone else to do everything for her. She was always the one to organize things, do things, exert her independence in a million little ways.

At that low point, a stranger walked into the Corcorans' hospital room — a U.S. Marine named Gabe Martinez. He's a veteran of Afghanistan who lost both legs from injuries very similar to Celeste's.

Martinez, who works with a group of amputees called the Semper Fi Fund that counsels severely injured servicemen, was the living proof Celeste needed that double amputees don't have to be dependent invalids.

He was "steady as a rock" on his prosthetic legs, she says. "And he's telling me I can be the exact same way."

Martinez and a fellow Marine, Cameron West, a single amputee, came back for more visits. They've pledged to help Celeste and Sydney through the coming weeks and months.

That was Celeste's third turning point.

"After I met them, it was like this ... this little spark," she says. "You know, it's really going to be OK. Before then, I knew I was going to live. I knew my loved ones were going to be around me. But the independent me ... after that point, it was like I got it that the sky's the limit. Nothing was taken from me that I can't get back. I can even be better than I was before."

And that's how Celeste Corcoran was feeling as she and Sydney prepared to leave Boston Medical Center and go to a rehab hospital for the next phase of their recovery.

Tomorrow: Celeste and Sydney Corcoran talk about their plans for the future and the men who made the bombs.