Accessibility links
Recovery Begins For Mother, Daughter Injured In Boston : Shots - Health News Fewer than three weeks after they were severely injured in the Boston Marathon bombings, Celeste Corcoran and her 18-year-old daughter, Sydney, are entering a new phase of recovery and rehabilitation. Part of their healing is emotional, not physical. 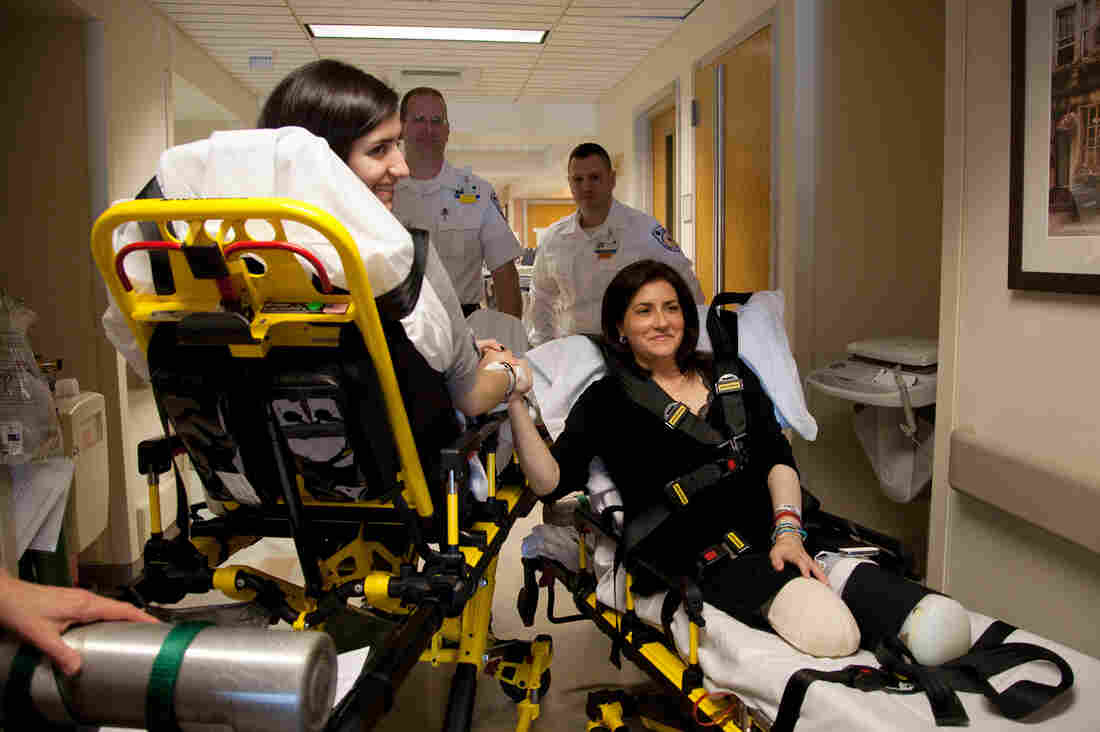 Celeste Corcoran (right) and her daughter Sydney Corcoran are transported to Spaulding Rehabilitation Hospital from Boston Medical Center on April 28. Sydney, who nearly bled to death after being struck by shrapnel in her thigh, is expected to recover most if not all function. Celeste required amputations of both legs. Doctors say the next phase of her recovery will be a holding pattern. Ellen Webber for NPR hide caption

The number of Boston bombing victims still in the hospital dropped to 19 as of Wednesday evening. The great majority have gone home or to a rehab facility.

That's what has happened with Celeste and Sydney Corcoran, a mother-daughter pair who ended up in the same hospital room after being struck down by the first marathon bomb blast.

Celeste required amputations of both legs, while Sydney, a high school senior, nearly bled to death after being struck by shrapnel.

Celeste, who's 47, is impatient to get on with her life.

"This is the worst part," she tells Shots. "You know, waiting to heal. Because there's basically nothing I can do but just allowing my body to heal right now."

Dr. William Creevy, the Boston Medical Center orthopedic surgeon who amputated her lower legs, says the next phase of Celeste's recovery will be a kind of holding pattern.

"Making sure that the wounds heal," he says, "that she maintains her mobility, that she does exercises so that she doesn't lose her aerobic fitness."

Celeste can't be fitted with her first set of artificial legs for six to eight weeks. Then she'll begin a long period when the stumps of her own legs change constantly as the muscles of her legs shrink.

She might not be steady on that second set of legs until next spring.

Eighteen-year-old Sydney will have a faster convalescence. She didn't require an amputation, but her right leg was severely damaged.

Vascular surgeon Alik Farber at Boston Medical Center says a razor-sharp piece of metal "the size of an iPhone" — probably a fragment of the pressure cooker used to make the bomb — sliced through major blood vessels in Sydney's thigh.

"The hole in her thigh was the size of a small melon," Farber says. "It was very large. Even when we controlled the main artery and vein, there was a lot of bleeding from the muscle because the shrapnel really did a job on her muscle."

Farber says he was able to close the wound without a skin graft. Despite damage to her leg and foot, he says, she'll be OK. 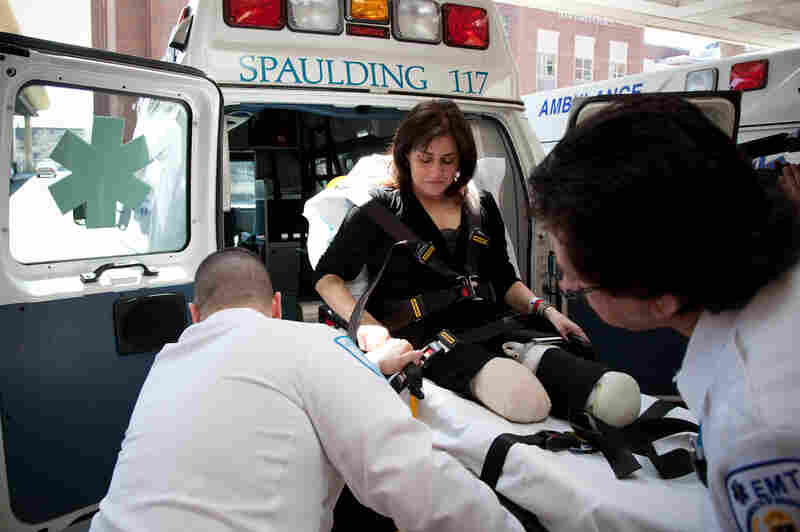 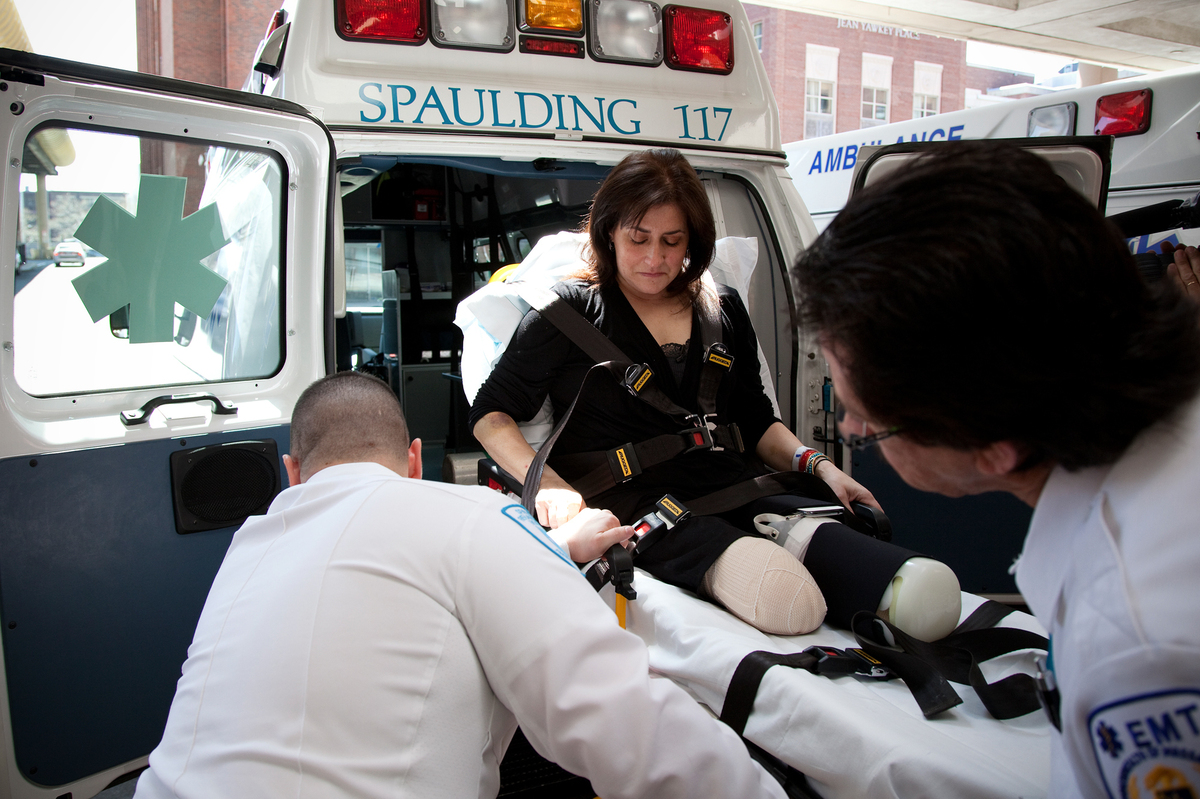 Celeste Corcoran is transported to Spaulding Rehabilitation Hospital on April 28.

But the Corcorans' healing is not just physical. They have to recover emotionally as well. That involves coping with their feelings about whoever did this to them.

Celeste has complicated feelings about the surviving brother accused of the crime, Dzhokhar Tsarnaev. Those feelings include anger.

"On some level, sure, that's a natural reaction," she says. "You know, if they didn't do that, I wouldn't be like this. But I pity them. I don't wish them any ill."

Does that mean she wouldn't wish for the death penalty if Tsarnaev were convicted?

"I wouldn't want to be the one to make that decision," she says. "If our legal system were to come to that end, then so be it. But I'm glad that I don't have to be his judge and jury."

Most of all, Celeste wants to put Tsarnaev out of her mind.

"I don't want him to affect my life anymore," she says. "I don't want to waste time thinking of this person."

"I am angry, and I don't think that there's going to be a time when I won't be," she says. "Maybe it will fade, but I think a part of me will always be a little angry."

Sydney definitely doesn't think Tsarnaev should be condemned to death if he's convicted.

"I think it's just too barbaric," she says. "I would just wish that the younger boy would just live out his life and just have to live with the fact that he did this. I don't think that a death penalty would help. I would rather he would just live a very long life having to cope with this."

Shortly after this conversation, Celeste and Sydney Corcoran said goodbye to Boston Medical Center to start the next phase of their recovery.

Riding hospital gurneys, they passed through the emergency department where they arrived 17 days ago at the height of the crisis. Dozens of nurses, doctors and technicians who helped take care of them burst into prolonged applause.

"You guys," Celeste told them, "I don't know if you know the impact you have in everybody's life. You see people come and go. And maybe people can't thank you. But we thank you from the bottom of our hearts."

Then she cut off further ceremony. "We ready? I gotta stop crying," she said. And it was out the doors to ambulances waiting to take them to Spaulding Rehabilitation Hospital on Boston Harbor.