Accessibility links
From Battlefield To Boston: Marine Comforts Bombing Survivors : Shots - Health News Marine Capt. Cam West lost one of his legs to a bomb in Afghanistan. Now part of the Semper Fi Fund, he's inspiring others with similar injuries to look ahead with hope. 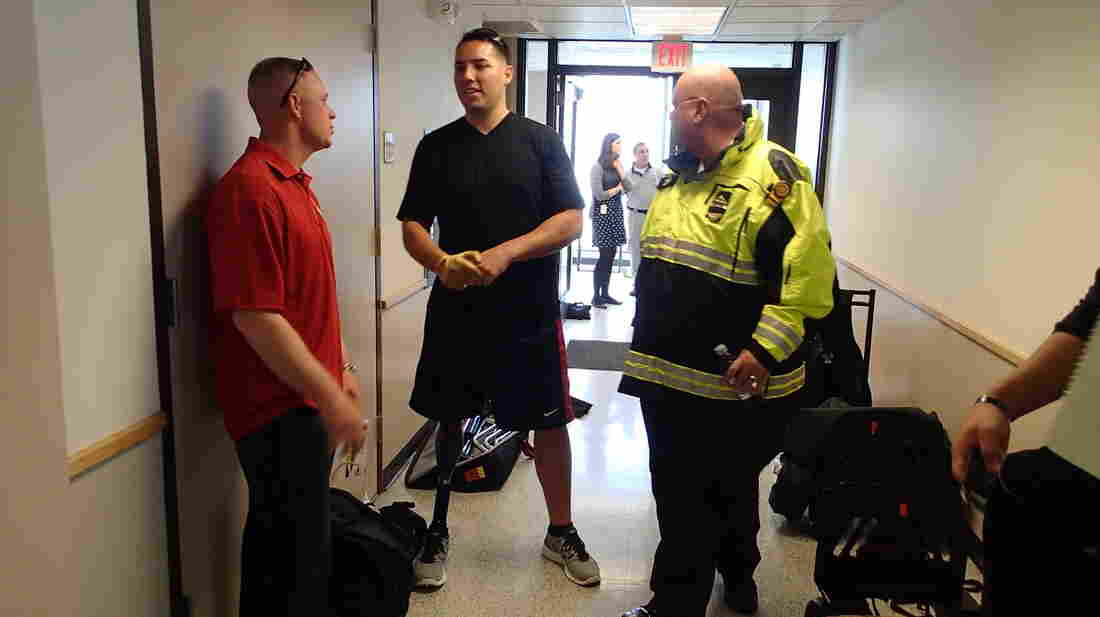 Editor's note: In a story earlier this week, we met Celeste Corcoran, one of nearly two dozen people who lost limbs in the April 15 Boston bombing. Corcoran told NPR's Richard Knox that a hospital visit from two Marines who lost legs in Afghanistan had given her hope. "After I met them, it was like this little spark, this little light," she told Knox, "[that] it's really going to be OK."

'Darkhorse' Battalion And The Afghan War

One of those Marines was Cam West, a young captain whom NPR listeners first met in 2011 in a profile by Tom Bowman. This week Bowman checked in with West again for NPR's All Things Considered; he shares this update with Shots.

In a video taken just days after the Boston Marathon bombing, Cam West breezes into the hospital room like a coach, trying to inspire the team at halftime. Celeste Corcoran sits in a chair, the stubs of her legs wrapped in gauze. She's holding hands with her daughter, Sydney, who was also injured.

West leans over Celeste and grips the arms of her chair. She dabs away tears. She can barely speak.

He moves in close, and waves a hand above her stubs. "This doesn't matter," he tells Corcoran. "It's just a change of scenery. It really is."

West knows what it feels like to wake up groggy and confused in a hospital bed, his parents at the foot of his bed. He was just starting on the road to recovery when we first met him and told his story on NPR.

Even then, West was telling himself that he could once again lead Marines in combat, though "shooting, running and gunning," would be trickier, he knew, after losing a leg. And, as he told us then, he had a fallback plan — to be a rancher in Colorado. "If I don't do the Marine Corps thing," he said in 2011, "look for me poking cows. Longhorns."

Today West is still a Marine. But he helps civilians cope with the loss of a limb, through the Semper Fi Fund, which supports critically injured Marines and their families. West and a handful of other Marines have visited 14 amputees at four Boston hospitals. 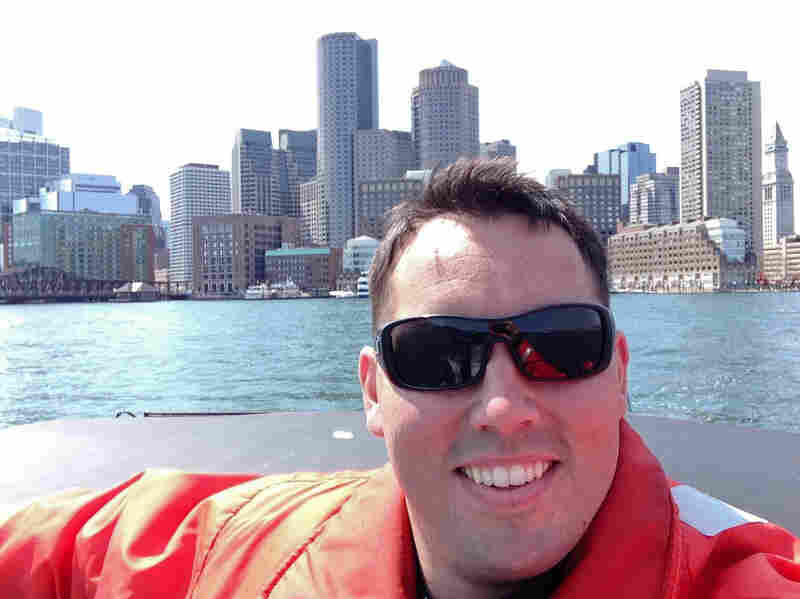 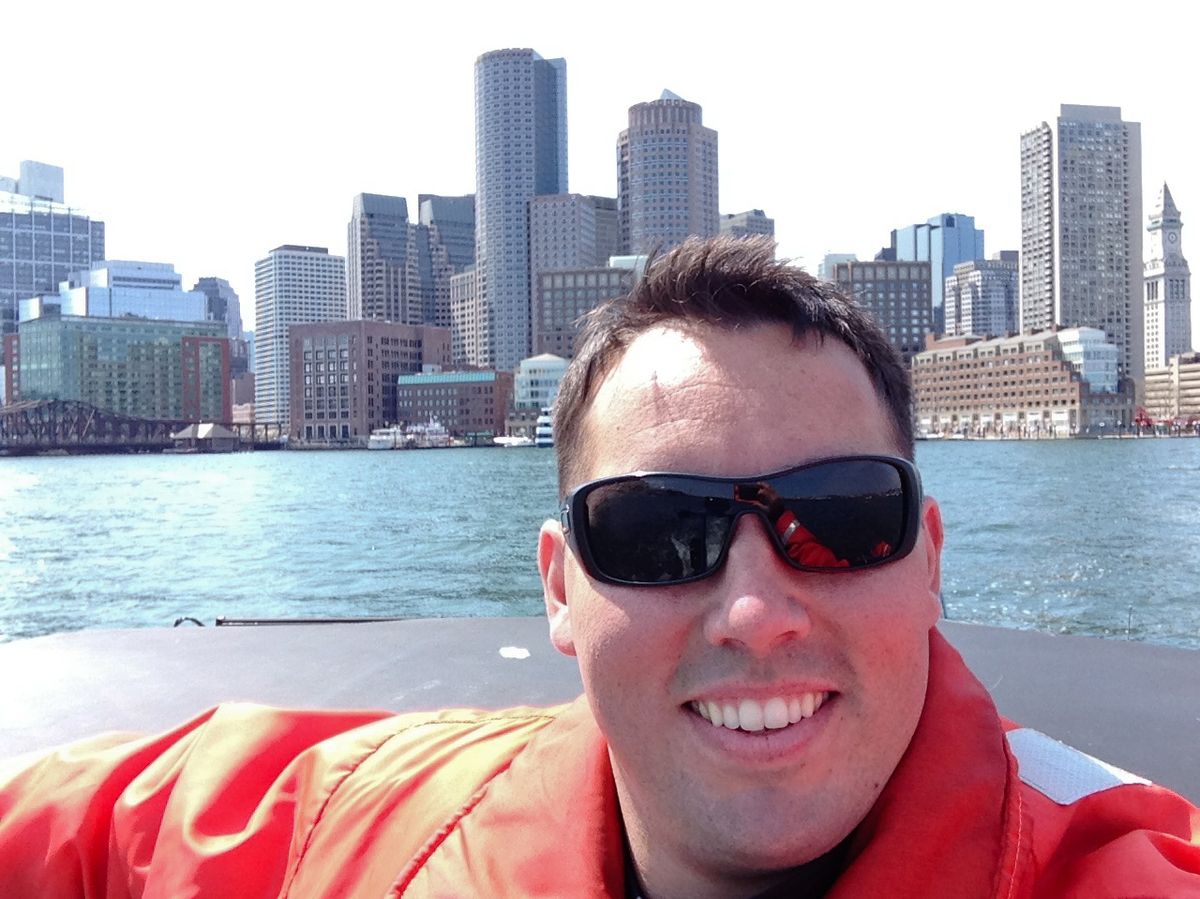 For Marines in Afghanistan, losing a limb is too common. West's unit was 3rd Battalion, 5th Marine regiment — or "Darkhorse," as they called themselves. It had the highest casualty rate for Marines in the past decade, because its mission took it to a nest of Taliban fighters and roadside bombs. It was so bad, some Marines strapped on loose tourniquets before heading out on patrol.

But no one expects middle-aged Americans and their children who are watching a road race on a city street to suddenly and violently suffer such injuries. Which makes the adjustment that much harder.

Some of those injured had no idea they had lost a limb until they awoke from sedation two or three days after the explosion, West notes. "[You're] missing a limb you had 48 hours prior, and [don't] know what occurred or how, it occurred. Yeah, it's a pretty big shock."

During their hospital visit, the Marines told the Boston amputees about rehabilitation, and about prosthetics. They told them there would be good days and bad. But West can say from experience that even more than the conversation, just standing there likely provided the strongest reassurance.

"The mobility that we had, the positive spirit that we had, and the motivation that we had" were most important, West says. "I think that does more than anything you can actually tell them."

West and his fellow Marines say they're planning a third trip to Boston, and they plan to go back again and again to encourage those who lost a limb that day.

And how did his ambitions turn out?

West has decided for personal reasons that combat's no longer for him. So he's going with that fallback plan: a ranch, although not in Colorado. Instead, it will be along the Georgia-Alabama border where he was born. He already has eight cowboy hats and still watches John Wayne movies almost daily.

"I've got a nice piece of property and I'm going to raise beef cattle," he says, "and live the Southern solitude life."

Well, not that secluded. West is planning to get married at the end of the year. His fiancee, he says, is a cowgirl at heart.