Accessibility links
Parents' Saliva On Pacifiers Could Ward Off Baby's Allergies : Shots - Health News Instead of rinsing off the pacifier when it falls out of your baby's mouth, new research suggests that sucking it clean for them could help keep them from developing eczema and asthma. Researchers say the harmless bacteria in parents' saliva works by stimulating the babies' immune system. 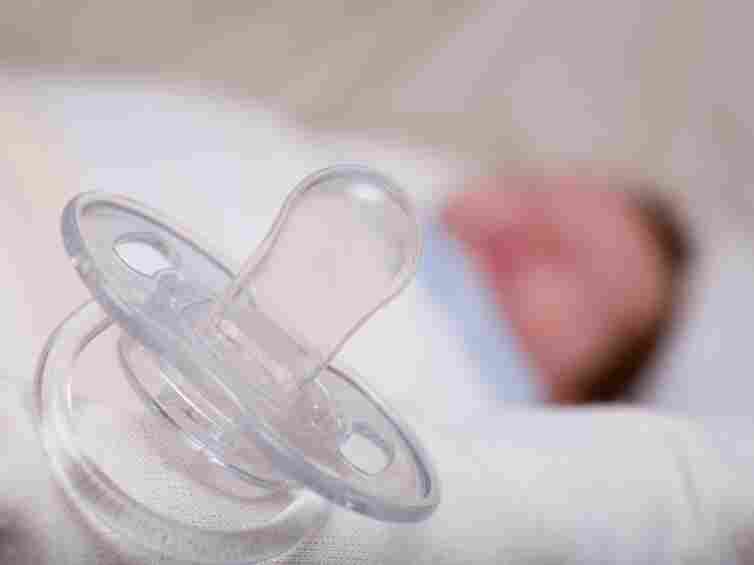 Sucking may be one of the most beneficial ways to clean a baby's dirty pacifier, a study found iStockphoto.com hide caption 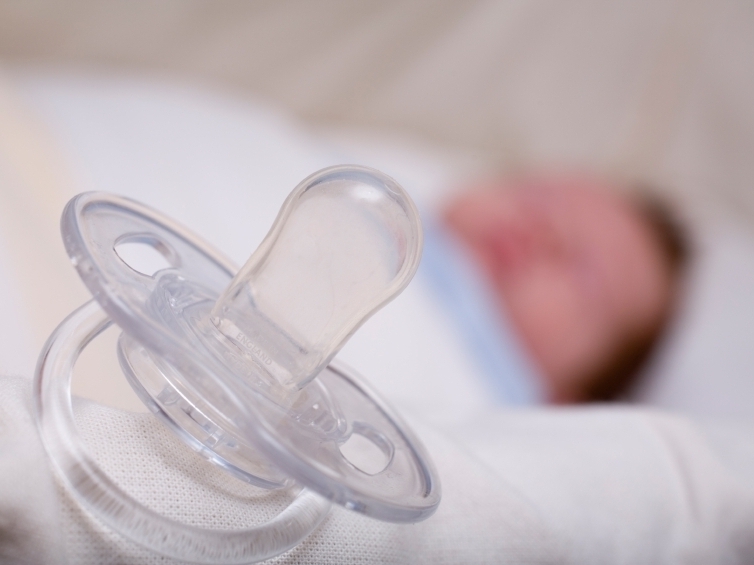 Sucking may be one of the most beneficial ways to clean a baby's dirty pacifier, a study found

That word "microbiome" — describing the collection of bacteria that live in and on our bodies — keeps popping up. This time, researchers say that children whose parents clean their pacifiers by sucking them might be less likely to develop allergic conditions because of how their parents' saliva changes their microbiomes.

That's the word from a small study of 184 Swedish babies published in this week's issue of the journal Pediatrics. The researchers found that the 65 babies whose mother or father sucked on their pacifiers to cleanse them were significantly less likely to get eczema and asthma, two conditions caused by allergic reactions, than babies whose parents did not use the cleaning technique.

"This is a really interesting and intriguing observation," says Elizabeth Matsui of the Johns Hopkins Children's Center, who was not involved in the research.

The findings add credence to a growing body of evidence that suggests that exposure, or the lack of exposure, to microbes early in life can affect a child's health by influencing his or her microbiome.

"There's recently been an explosion of interest in the microbiome and how it might influence many things — but in particular someone's propensity to develop an allergic disease," Matsui says.

To investigate the role of pacifier cleaning, Bill Hesselmar of the University of Gothenburg in Sweden and his colleagues analyzed data they had collected for a broader study about babies' allergies. Among the questions the parents had answered was what they did when their child's pacifier fell out of his or her mouth.

"We asked them how they cleaned the pacifier — if they rinsed them in water — and of course most of them did," Hesselmar says. But a lot of the parents did something else.

"They put it in their mouth, sucked on it and then gave it back to the children," Hesselmar says. "It's a quite common way to clean pacifier."

When the researchers checked to see if there were any differences between the kids whose parents sucked their pacifiers clean and those who didn't, they found there was. Those whose parents sucked the pacifiers clean were significantly less likely to have developed eczema at 18 and 36 months and less likely to have developed asthma at 18 months, the researchers say.

"Eczema is the best disease to choose [as a marker] if you want to see if a young child is becoming allergic," Hesselmar says.

Scientists think that when parents suck their child's pacifier clean, they transfer some of the harmless bacteria in their mouths to their child, Hesselmar says. In fact, the researchers found evidence supporting that when they analyzed the saliva of the babies in the study.

"We think that these bacteria ... stimulate the immune system," Hesselmar says. And that teaches it how to do its job properly, which includes not overreacting to things like peanuts, pollen and cats, he says.

The study adds to a growing body of evidence that lots of kids these days may be growing up essentially too clean, Matsui says.

"We are much less likely to be exposed to organisms in water — parasites, for example — so the idea is there is much less for the immune system to fight off. So it starts reacting to things that perhaps it should be ignoring," Matsui says.

Amanda Sauer, 35, of Washington, D.C., uses a pacifier when her 2-year-old son, Leo, gets fussy. When it falls to the ground she often washes it off.

Sauer's not sure the new research will make her start licking Leo's dirty pacifier.

"Probably not," she says. "But it's more for just the fact that I don't really want to put a pacifier in my mouth. But sometimes the dog cleans it off for us, so maybe that's just as good."