Accessibility links
Officials Prepare For Another Flu Pandemic — Just In Case : Shots - Health News Those people who have contracted the H7N9 virus have become very sick. And unlike the older bird flu virus, this one shows some adaptation to mammals, making it a matter of concern. But it doesn't make chickens sick, posing unique difficulties in fighting this kind of flu. 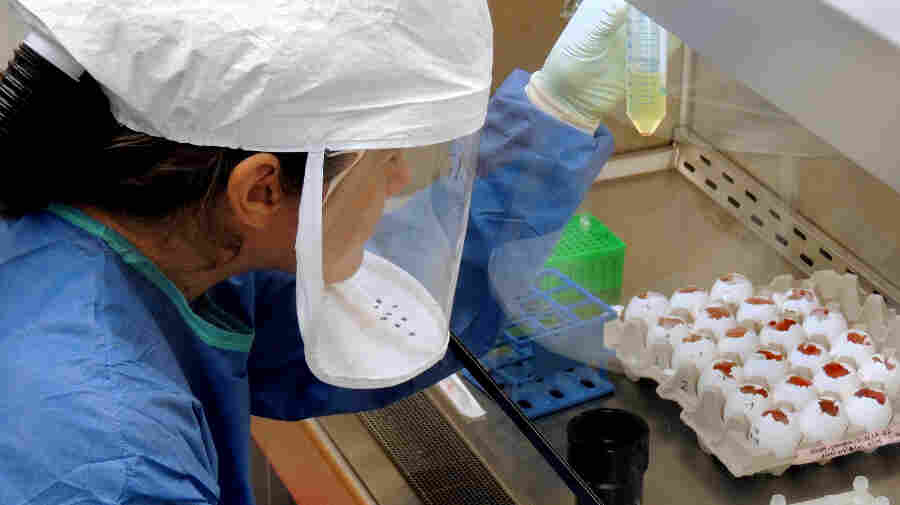 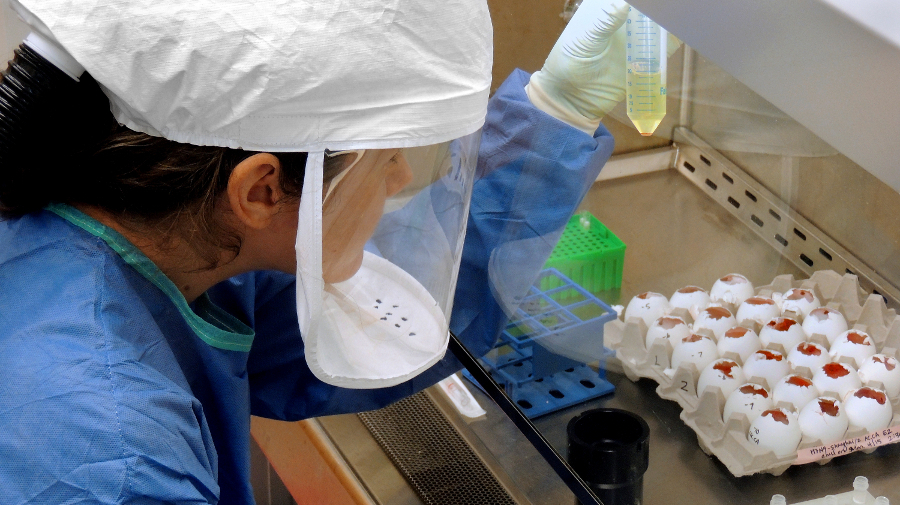 A scientist harvests H7N9 virus growing in bird eggs. The Centers for Disease Control and Prevention received samples of the virus from China in March.

There's been a buzz of activity at the Centers for Disease Control and Prevention in Atlanta since scientists got their first samples of a new bird flu virus from China four weeks ago.

Already they've prepared "seed strains" of the virus, called H7N9, and distributed them to vaccine manufacturers so the companies can grow them up and make them into experimental flu vaccine.

They've also come up with a new diagnostic test for H7N9 that the Food and Drug Administration has approved on an emergency basis.

What's In A Flu Name? Hs And Ns Tell A Tale

Meanwhile, CDC researchers have almost concluded experiments that involve infecting ferrets with H7N9 — in particular, a virus derived from a 35-year-old Chinese housewife who died last Monday from the flu.

Because ferrets' respiratory tracts are similar to those in humans, researchers want to see if the animals can infect each other through droplets in their exhalations, a possible clue to the all-important issue of whether this virus has the potential to spread readily among humans.

Dr. Daniel Jernigan, deputy director of CDC's influenza division, says there are two main reasons why H7N9 is getting so much attention.

First, people who get it usually get very sick, and so far nearly a quarter of the 130 human cases have resulted in death.

Second, the genetic makeup of this new virus is disturbingly different from an older bird flu virus that has sickened more than 600 people over the past 10 years and killed more than half of them. That virus is an H5 type.

"The thing that's different between them is the H5 virus still maintains a lot of the avian or bird flu characteristics," Jernigan tells Shots, "whereas this H7N9 shows some adaptation to mammals. And that's what makes it different and concerning for us."

For instance, the newer bird flu has adapted to thrive at human body temperature, which is much lower than the body temperature of birds. It's a necessary step toward becoming a flu that could spread easily from human to human — but it's not sufficient.

"It still has a ways to go before it becomes like a human virus," Jernigan says. "But the fact is, it's somewhere in that middle ground between purely avian and purely human."

"That's something you have to keep an eye on," Fauci tells Shots. "But we still don't know the complete road map of how it goes from a relatively nonadaptable to an adaptable virus to humans."

Meanwhile, officials aren't just waiting to see if this virus becomes fully adapted to humans. The CDC has asked state and local officials to dust off the plans they worked up several years ago when it looked like the earlier bird flu virus might cause a big pandemic.

A map of eastern China, showing the locations of reported H7N9 bird flu cases from Feb. 19 to April 29. Centers for Disease Control and Prevention hide caption

A map of eastern China, showing the locations of reported H7N9 bird flu cases from Feb. 19 to April 29.

"The pandemic-preparedness engines are already humming," he says.

For instance, plans are being laid for human trials of several candidate H7N9 vaccines.

"We would hope that there's enough vaccine by the end of June or so, so that you could start the clinical trials through July, August, through the end of the summer," Fauci says. "Hopefully it won't be any later than then."

Those studies will tell scientists if they have a good-enough vaccine against the new flu — in case the virus begins to spread easily among people.

Meanwhile, the problem is how to prevent people from getting it from chickens.

In the past, that has been accomplished by wholesale killing of poultry flocks as soon as any get infected.

That's what Chinese officials did this week at a chicken farm in Guangdong, the southern province that provides Hong Kong with most of its poultry; 90,000 chickens were destroyed after the H7N9 virus was found in one bird.

But Jernigan of the CDC says that won't work as a general strategy, because this new virus doesn't make chickens sick, though they can be infected and spread the virus around.

After all, health officials can't just kill every chicken in China.

"It is a difficult problem," the CDC official acknowledges. "There are lots of chickens in China."

Even if a chicken vaccine were developed against H7N9, there'd be no incentive for farmers to buy it — because this virus doesn't kill chickens.