Accessibility links
Middle East Virus Spreads Between Hospitalized Patients : Shots - Health News SARS burst on the scene in 2003 after one man infected travelers staying on the same floor of a Hong Kong hotel. Now that a new virus with similarities to SARS has spread from person to person, public health officials are urging hospitals to be on guard. 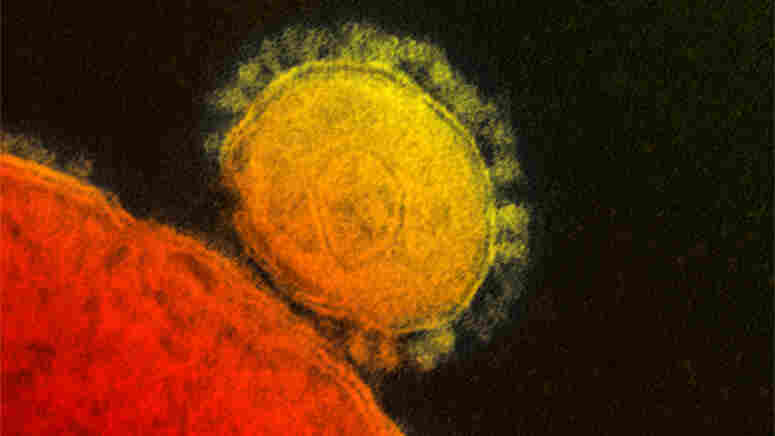 The new coronavirus has a crown of tentacles on its surface when viewed under the microscope. NIAID/RML hide caption 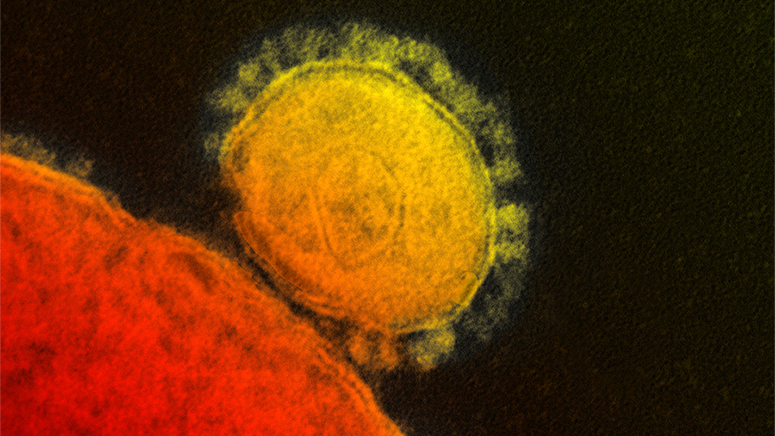 The new coronavirus has a crown of tentacles on its surface when viewed under the microscope.

It's been eight months since a Saudi Arabian doctor described a previously unknown virus related to SARS. And for most of that time only germ geeks paid much attention.

But in the past few days the new virus — which some would like to call MERS-CoV, for Middle East Respiratory Syndrome Coronavirus — has been making up for lost time.

In one Saudi Arabian hospital, 15 patients have recently struggled with the dangerous virus, and seven have died.

Meanwhile, in northern France, a man who recently returned from Dubai with the virus has infected a patient in the next hospital bed.

Another cluster of cases at a hospital in Jordan, identified retrospectively last year, underscores the pattern. Like SARS, this virus is especially apt to spread within hospitals.

One of the hallmarks of SARS is that about half the cases involved transmission within hospitals, notes Dr. Eric Toner of the University of Pittsburgh's Center for Health Security. And many of the other cases could be traced back to people who got infected in hospitals — both patients and staffers.

Thankfully, the newest coronavirus is not behaving like its cousin the SARS virus, or not yet.

SARS burst on the scene in 2003 after a single infected Chinese man infected an array of travelers staying on the same floor of a Hong Kong hotel. Within weeks, the virus was causing severe illness and death in more than 30 countries.

By contrast, over the past year the new coronavirus is known to have infected 34 people and killed 18.

So the spread of MERS has been far less explosive than SARS.

At a media briefing over the weekend in Saudi Arabia, Dr. Keiji Fukuda of the World Health Organization noted that person-to-person transmission of the new coronavirus "has remained limited to small clusters, and so far there is no evidence that this virus has the capacity to sustain generalized community transmission."

But you might have noticed that the new virus's apparent mortality rate has been higher so far — 53 percent for MERS versus 10 percent for SARS.

Be careful with these figures, though, because far less is known at this point about the true rate of MERS infections and deaths.

Still, there's no question this new virus is highly lethal, possibly because it massively disrupts its victims' immune responses, perhaps even more so than the SARS virus.

That effect and the size of the recent hospital cluster of MERS cases in Saudi Arabia have grabbed the attention of public health officials.

And the University of Pittsburgh's Toner points out that SARS was so easily transmitted in hospitals because most patients were maximally infectious while there. In other words, they were shedding the most virus several days into their respiratory illness, when they were likely to be hospitalized.

By contrast, patients infected with flu viruses shed maximal virus within the first few days, when they're out and about.

There are pluses and minuses to the propensity of the MERS virus to spread within hospitals. On the minus side, it means hospitals virtually anywhere in the world could find themselves with an infected patient — as the hospital in northern France found out.

But on the plus side, spread of the virus can be halted by strict observance of infection-control precautions by hospital staffs when treating a patient with a respiratory illness of unknown origin. That's largely how SARS was brought under control.

Toner worries that hospitals have largely forgotten that lesson.

"Hospitals were very attuned to respiratory precautions in 2003, at the end of the SARS outbreak," Toner tells Shots. "But they have reverted, at least partially, to their previous practice of being pretty casual about it. We see this every day."

Since MERS seems to be taking advantage of health care facilities as a breeding ground, Toner says the message to hospitals around the world is clear: Wake up!