Accessibility links
Biking To Work: Healthful Until You Hit A Pothole : Shots - Health News Biking to work is a great way to get exercise, save money and reduce pollution from cars. But does the risk of accidents cancel out all the good? Experience in Europe says no, but the U.S. lacks that tradition of urban bike travel. 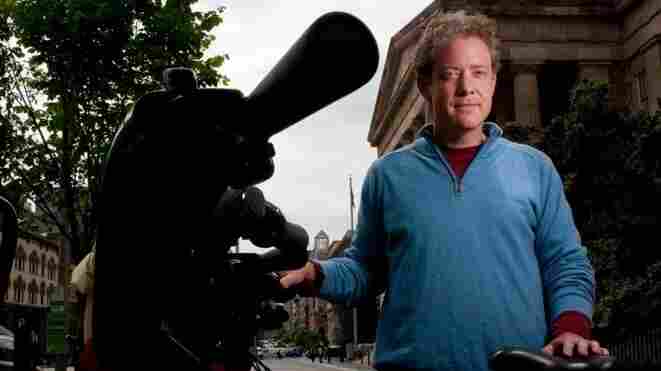 Bartender Matt Carucci told NPR in 2012 that he rarely feels safe biking in the city but often rides without a helmet anyway. "There are a lot of other ways to hurt yourself," he said. John Rose/NPR hide caption 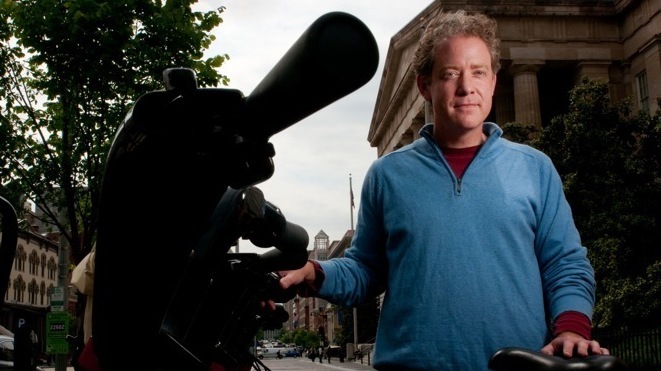 Bartender Matt Carucci told NPR in 2012 that he rarely feels safe biking in the city but often rides without a helmet anyway. "There are a lot of other ways to hurt yourself," he said.

There's a lot to love about biking to work: the exercise, the fresh air, the cost savings and the benefits for the environment.

But does it make you healthier?

That's a question that's not as easy to answer as you might think. But since today is Bike to Work Day, we'll give it a try.

A large study of 30,000 people in Copenhagen over 14 years found that those who biked to work lowered their risk of death by 40 percent compared to sedentary people. And in the short term, another study of 100 people in Perth, Australia, who replaced some car commutes with bike trips over the course of a year, found the bicycling improved aerobic fitness, cholesterol numbers, and lowered the risk of heart attacks and strokes.

That seems pretty straightforward. But what about the risk of getting crushed by a trash truck? Anyone who's bicycled even a little bit knows all too well the fear of an encounter with a motor vehicle. Just yesterday the Washington Post reported on 20-year-old bicyclist who was critically injured after being hit by a car in downtown Washington.

In 2011, 677 bicyclists died in collisions with motor vehicles. According to the U.S. Department of Transportation, bicycle travel accounts for 2 percent of traffic deaths and just 1 percent of trips.

But that stat doesn't account for the miles traveled by bicyclists, and how long it takes them to travel those miles, as well as the type of road they're on, and time of day. (Bicycling later in the day is riskier, and alcohol use may be a factor in that, on the part of both motorists and bicyclists.)

Data on bike accidents is even sketchier, since bicyclists don't typically report crashes to insurers the way drivers do.

A very unscientific survey on the NPR science desk found that almost all of the bike commuters have been injured at least once, with most of the injuries involving broken ribs and collarbones.

Many of them involved collisions with other bicyclists or pedestrians. Some involved another bicyclist violating traffic laws, and some were just bad luck. That includes the time Joe Palca hit a pothole, crashed, and wiped out Richard Harris, who was riding beside him. Both suffered broken bones. Harris says that's the only accident he's had in 21 years of bike commuting to NPR.

"For me, biking to work is the only reason that I've kept in even marginal shape throughout my 20s and 30s," says global health reporter Michaeleen Doucleff. At age 20 she mangled the cartilage in one knee when she hit a pedestrian; he broke a wrist. "Otherwise, I've been pretty lucky. Sixteen years of commuting and just one major accident. Knock on wood."

Several studies have tried to weigh the risk of injury and death in weighing the health aspects of bike commuting. A 2011 study of a bikeshare program in Barcelona found that the increased life expectancy due to better health substantially outweighed the accident risk. Biking's health benefits also outweighed harms caused by exposure to pollution. The further the bicyclists traveled and the more days they biked, the greater the health benefits.

And a 2009 study in The Lancet estimated that switching to biking would do more to reduce greenhouse gas emissions and improve health than using low-emissions vehicles.

But these studies were done using computer models, not by actually measuring the health of bicyclists and drivers over time. And they were done using data from European cities, where longstanding acceptance of bicycle travel should make for safer commutes.

Indeed, one of the more fascinating threads to emerge from the skimpy science of bike commuting in America is that the more people bike, the safer it may become. In cities like Seattle, Portland, and Minneapolis, bike travel has soared in the past few years, but accident rates have stayed stable. That may be because of new bikeways that separate cars and bikes, or the fact that drivers are getting used to sharing the road with cyclists.

What next for bike commuters? Expect plenty of argument over whether adults should be required to wear bike helmets.

"Helmets prevent 85 percent of brain injuries," says Frederick Rivara, a professor of pediatrics at the University of Washington who has studied helmets and injury. "One of the concerns now is that with the bikeshare programs like the one that's going to start in New York and the one you have in DC, they have not dealt with the whole helmet issue."

Some proponents of increased urban biking say that helmets shouldn't be required because it discourages bicycle use for short commutes, errands, and impromptu rides. They point to enviable safety data from European cities where most bike commuters don't wear helmets. A 2012 study of bicycle riders in DC and Boston found that 20 percent of bikeshare riders used helmets, compared to 50 percent of adults using their own bicycles.

But the doctors aren't buying it. "Concussion is what we're trying to prevent," says Dr. David Milzman, a professor of emergency medicine at Georgetown University and co-author of the study. "There's all this crazy literature that the helmet makes you actually more likely to get injured, because people think they're safer with a helmet. That stuff is crap."

Get a concussion, Milzman says, and you'll be lucky if you miss just a few weeks of work.