Accessibility links
Less Sleep For Teens Means Higher Risk For Car Crashes : Shots - Health News New, young drivers are much more likely to have an accident if they're short on sleep, researchers say. And teenage drivers are far more impaired than adults when facing an equivalent lack of sleep. 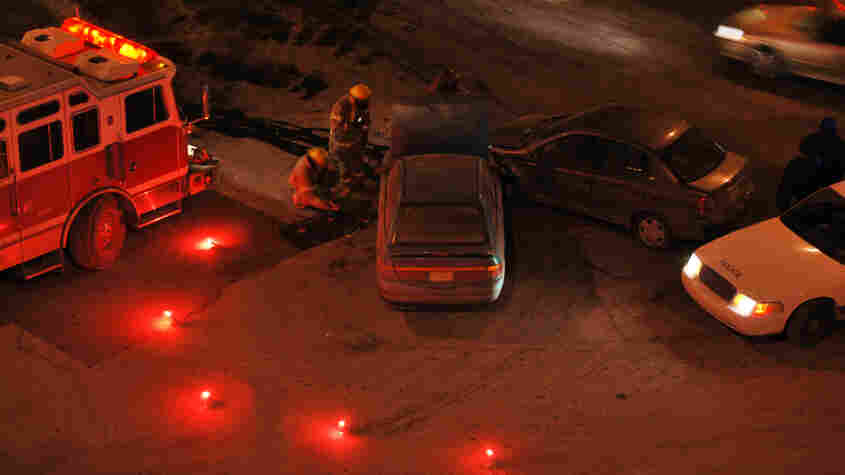 Parents who want to keep their teenagers safe while they're driving might want to tuck them in bed early the night before.

Drowsiness is a well-known risk for adult drivers, but teenage drivers are more impaired than adults when facing an equivalent lack of sleep, an Australian study finds.

"Young people are particularly at risk for sleep deprivation," Alexandra Martiniuk, lead author of a study on sleep teens study's lead author, and a researchers at the George Institute in Sydney, said in an email to Shots. "It doesn't take drastic sleep reductions to increase the risk of crash."

And many young people aren't getting nearly enough sleep. In this study, which tracked the habits of almost 20,000 new drivers in Australia for two years, 10 percent of the 17-year-olds and 17 percent of the 20- to 24-year-olds said they slept for six hours a night or less.

That's a lot less than the 8 1/2 to 9 1/4 hours of sleep a night that teenagers need, according to other studies.

Six hours of sleep a night was enough to increase the young people's relative risk of an accident. Those short-sleepers were also more likely to engage in risky behaviors like drinking and using illegal drugs.

The large number of participants in this study, and the fact that it followed their behavior over time, make it more likely to be accurate than studies that ask people to remember what they did. The researchers relied on police reports of accidents.

The findings lend support to the use of graduated drivers' licenses that keep new drivers from driving at night. It found that the risk of accidents was greatest when young people were driving between 8 p.m. and dawn. This may help explain why most fatal accidents with teenagers happen at night, even though most of their driving is done during the day.

It doesn't take drastic sleep reductions to increase the risk of crash.

Drinking and driving poses much more of a risk than lack of sleep, but the study didn't have a way to measure the new drivers' blood alcohol level at the time of accidents. That could confuse this data, but the scientists are confident that the lack of sleep remains a risk even when accounting for other factors.

The study was published online in JAMA Pediatrics.