Accessibility links
Boomer Housemates Have More Fun : Shots - Health News Some single baby boomers are moving into group houses, a college-era solution to their modern needs. Housemates share costs, socialize, and cheer each other on through life's thick and thin. 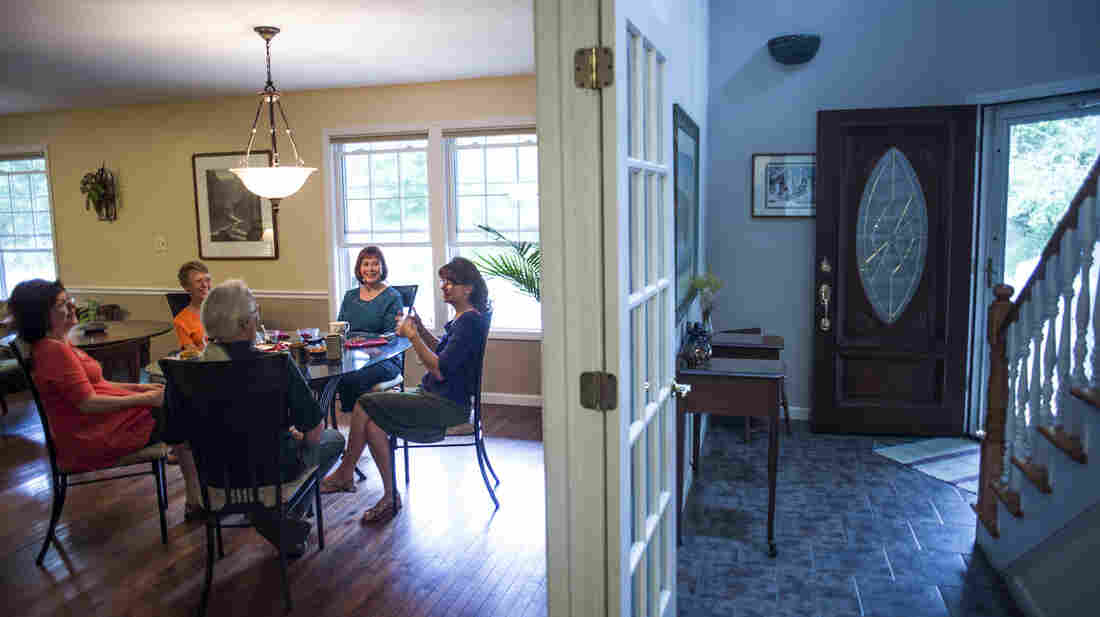 Today more than 1 in every 3 baby boomers — that huge glut of people born between 1948 and 1964 — is unmarried. And those unmarried boomers are disproportionately women. As this vast generation rushes into retirement, there's a growing concern among experts on aging: Who will take care of all these people when they're too old to care for themselves?

It's a question many of the experts take personally. "That is what scares me," says Sara Rix, who works for the AARP Public Policy Institute, studying the economic prospects of women in the workforce. "Because I am one of those people," she says, "and I do think about it."

Kathleen Kelly, who runs the Family Caregiver Alliance and the National Center on Caregiving in San Francisco, says she's seeing the same sort of concern in her social circle. "I'm in my 50s, and my friends are all talking about, 'Could we all move in together? Could we buy an apartment building and all live together?' There are all sorts of permutations of this conversation," Kelly says. "But it really is something that people are thinking about, particularly women." 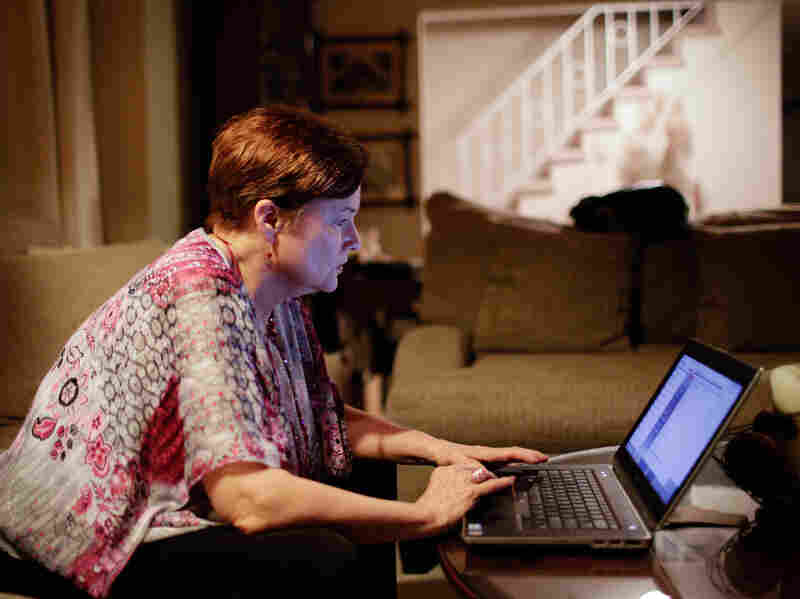 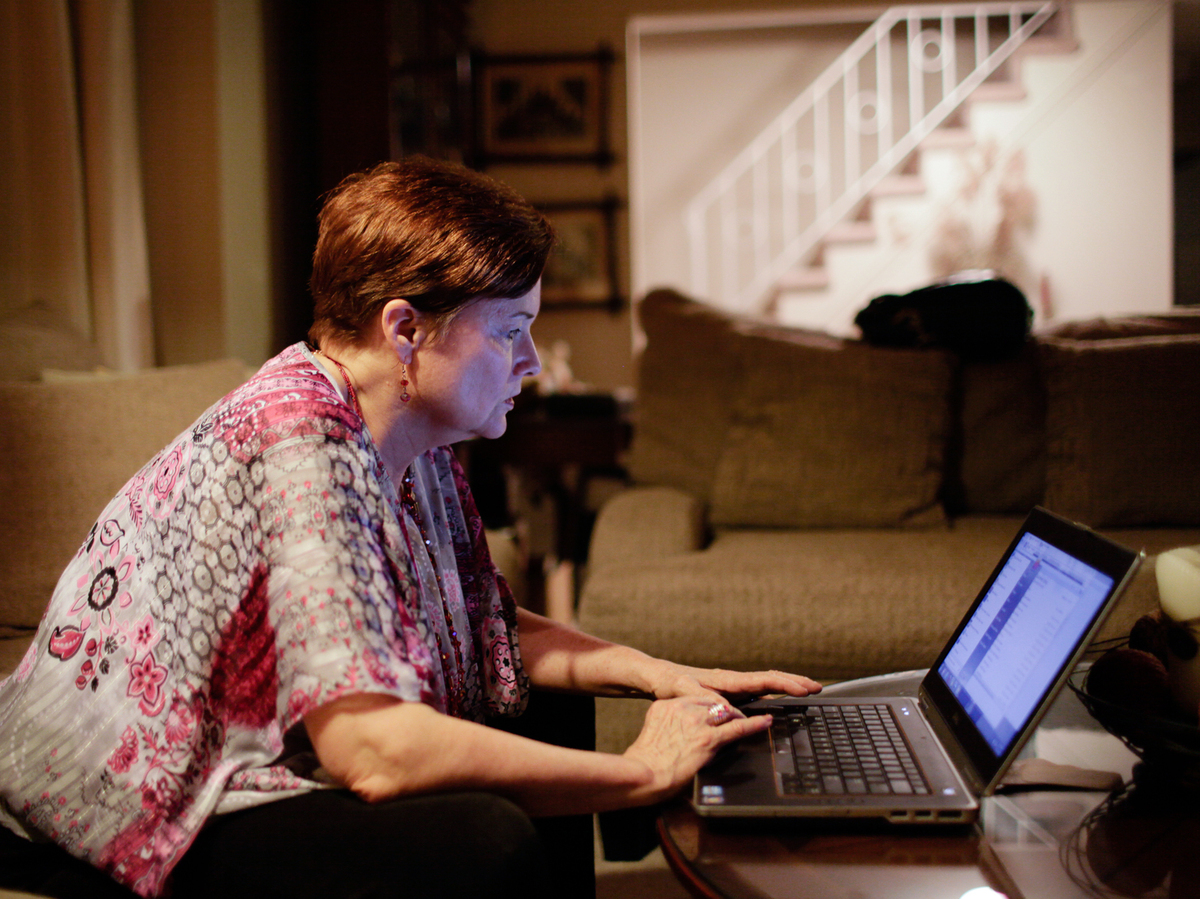 And, because boomers are boomers, some are doing more than just thinking about it. Already, there's a small but apparently growing movement of boomer women forming group houses with their single peers.

One of those homes belongs to Bonnie Moore, a 60-something divorcee who lives in a well-kept, five-bedroom house in Bowie, Md., a cozy suburb of Washington, D.C.

To stay in her house after her divorce, Moore needed financial help. But she wanted to do more than just add boarders who would help pay the bills, she says. The home she's organized instead is "a little bit like family, a little bit like roommates, a little bit like a sorority house," she says from the sofa of her softly lit living room. "It just evolves."

Moore, an attorney, isn't actually childless. She has a grown son who lives in Utah and has been urging Moore to move there to be closer to him and his family. "He's just sort of saying, 'Well, Mom you're old now; we have to take care of you,' " Moore says. "And I'm saying, 'I'm not old. I've got 20 years out there in my yard, thank you very much,' " she says with a laugh.

Moore has been careful about selecting as housemates women who get along, but who also have a sense of independence. "All of us, we have our own separate lives," she says. "We do our own separate things, but we'll meet up in the kitchen and chitchat. And then we'll all go our different ways, which makes it nice. None of us are joined at the hip, and yet we all live together and do our own thing and live in the same house."

Solivan, an event manager for a food company, had been living in an apartment in Northern Virginia. But she was having financial troubles of her own and was looking to downsize.

"And then I saw the ad on Craigslist: GOLDEN GIRLS HOUSE. I said, 'Oh, that looks like fun,' " she says. 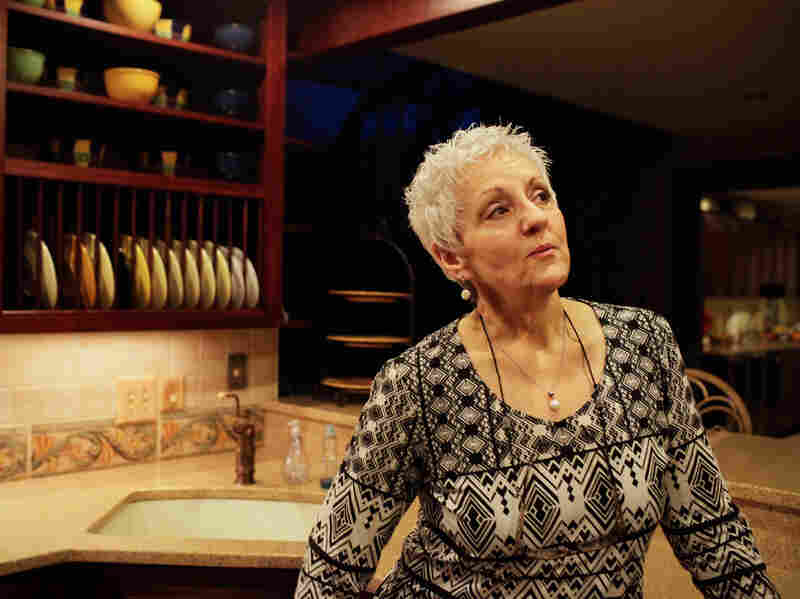 Lorene Solivan moved into the "Golden Girls" house in October after seeing an ad on Craigslist. An event manager at a food company, Solivan says she often cooks dinner for the group. Maggie Starbard/NPR hide caption 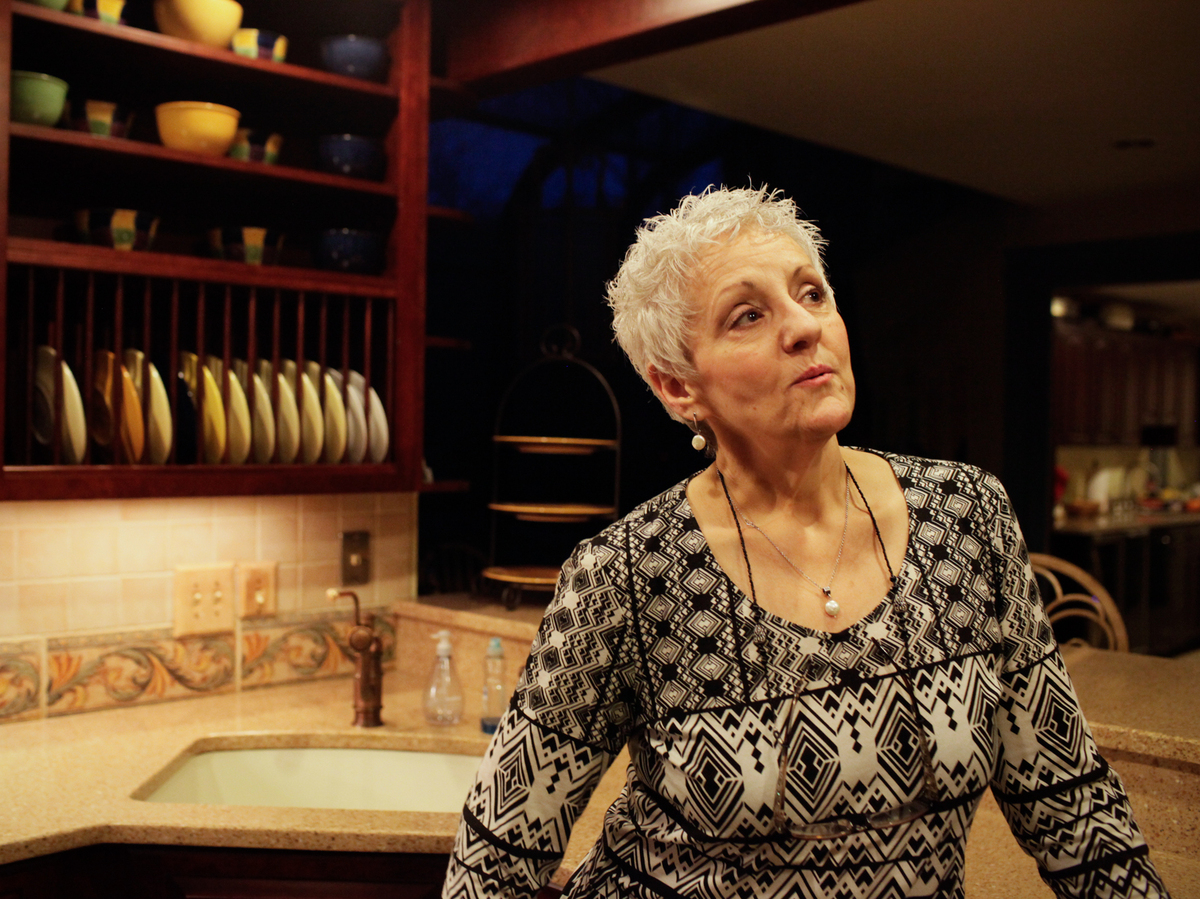 Lorene Solivan moved into the "Golden Girls" house in October after seeing an ad on Craigslist. An event manager at a food company, Solivan says she often cooks dinner for the group.

Solivan, who does much of the group's cooking, says it's been a nice transition for her. To live with a built-in social group of people your own age is "a big plus," she says, "whether you're 20, 40, or 60 — whatever the case may be."

That's why Moore is trying to take her concept and expand it. She already has a website and is working on a guide to help other single boomer women set up houses like hers. "I think it'll be fun," she says. "And I'd like to be part of various seminars and workshops for women [about] the whole idea of living communally and learning to get along in this kind of environment."

Still, there are a lot of obstacles. One big one is that most boomers don't realize they might need help getting or paying for long-term care if their health falters.

"I call it the 70-70-70 conundrum," says Bruce Chernof, president and CEO of The SCAN Foundation, which focuses on long-term health care issues. "Seventy percent of people over the age of 65 will need some form of long-term-care supports as they age," he says. But when you look at polling, "roughly 70 percent of Americans don't actually think they're likely to need it, and roughly 70 percent think Medicare will probably cover it when they get there."

The problem, of course, he adds, is that "those last two 70 percents are not true."

Then there's the numbers problem. "We know that ... about a third of baby boomers are single," says Kelly. "But we also know that there's a large percentage of those that are in their 50s and 60s [who] are getting divorced, and so we're going to have more single individuals in the future. We just haven't seen this before."

At the same time, most boomers have had fewer children than previous generations did, and many boomers have no children.

"So there's less adult children to take the place of the caregiving cohort that currently is providing ... caregiving to their parents," she says. And today, family caregiving provides an estimated $450 billion a year worth of unpaid care.

She Works: How Do You Get Support?

Rix of AARP says a big problem for single boomer women is that they're not financially prepared to hire the caregivers they might need if they don't have family members to volunteer the time. "[These single women] are still likely to be concentrated in what we've traditionally called the 'pink collar' jobs," she says, which are "the lower-wage, low-benefit occupations. So when they reach old age, they often reach old age without pension coverage."

Most of these women will have Social Security, Rix says — assuming that they are eligible, and that the rules don't change between now and when they retire. But for many older women, that will be all, or nearly all the money they have to live on, she says, "and it's not going to pay for a lot of care — formal care. So it's a frightening future for a lot of women."

There are things women can do to make that future a little less frightening, says Kelly. Some suggestions are pretty obvious, like maintaining a healthy, active lifestyle.

But another bit of advice may be less intuitive, Kelly says, "and that is to invest in social relationships and networks." She doesn't mean the sort of social networks people create on the Internet, but rather, "a community of individuals [living with or near you, so] that you may be able to share tasks and responsibilities as you grow older."

That brings us back to Bonnie Moore, who says that deciding to form a group house was about more than just financial necessity. "I think women naturally are more community oriented," Moore says. "It's just part of the woman's nature."

And besides, she adds, "to come home and have someone say, 'Hi, how was your day?' ... That's really nice sometimes."

So if you're a boomer and you liked that group house you shared in college or just after, good for you. The United States is one of the few developed nations that have no organized public policy for providing long-term care — so group living may be in your future as well as your past.