Accessibility links
Research Reveals Yeasty Beasts Living On Our Skin : Shots - Health News While studying microorganisms on humans is not new, tracking fungi is. In a census of sorts, scientists checked the skin of healthy volunteers. They found an expansive ecosystem of silent inhabitants.

Our Bodies, Our Fungi? 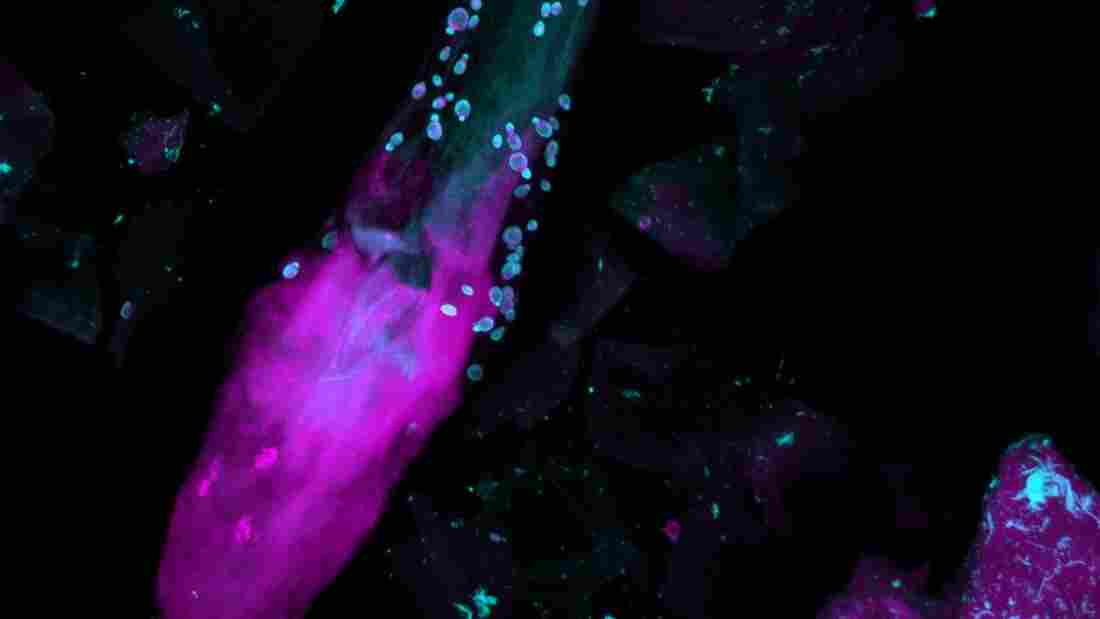 Fungi (cyan) surround a human hair within the skin. A study in the journal Nature shows the population of fungi on human skin is more diverse that previously thought. Alex Valm, Ph.D. hide caption 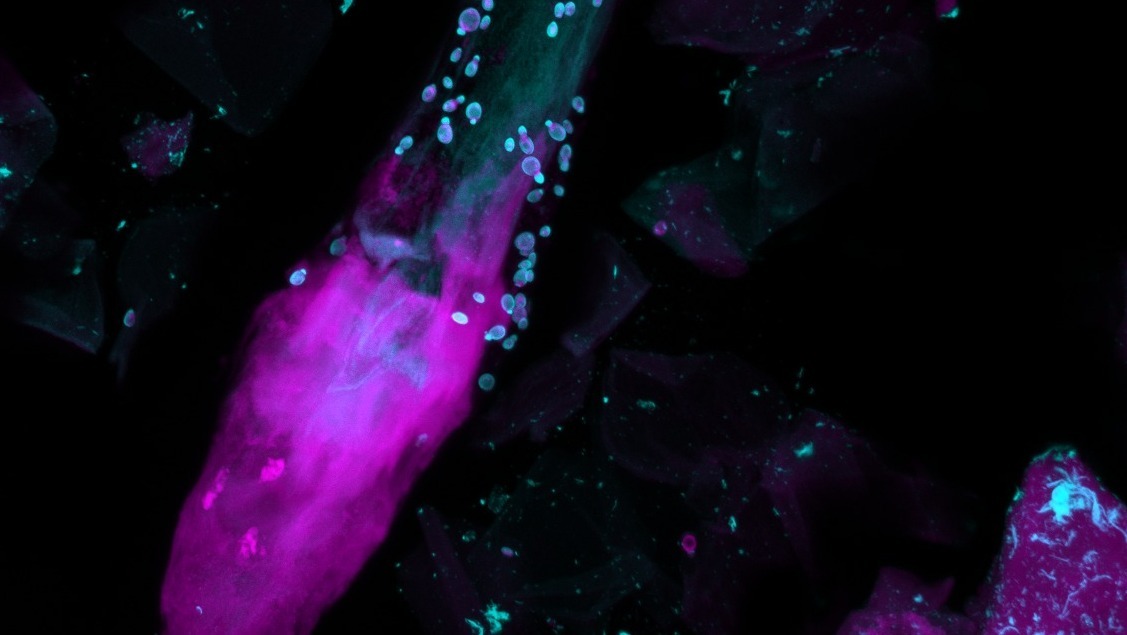 Fungi (cyan) surround a human hair within the skin. A study in the journal Nature shows the population of fungi on human skin is more diverse that previously thought.

Scientists have completed an unusual survey: a census of the fungi that inhabit different places on our skin. It's part of a big scientific push to better understand the microbes that live in and on our bodies.

"This is the first study of our fungi, which are yeast and other molds that live on the human body," says Julie Segre, of the National Human Genome Research Institute, who led the survey.

Trillions of microbes live everywhere in and on our bodies. Most of these viruses, bacteria and other microorganisms are harmless. Many of them are actually helpful. But scientists are just starting to figure out exactly what they are and what they do.

"A lot of medicine has to do with not just our own human cells but really [is] about how humans interact with the bacteria and fungi that live on our bodies," Segre says.

To assess the fungal population, Segre and her colleagues collected samples from 14 different patches of skin on 10 healthy volunteers.

"We did an exploration where we looked at all the different little crevices of your body," she says.

The researchers then sequenced the fungal DNA in those samples and report what they discovered in this week's issue of the journal Nature.

"What we found was that the human body is an even more diverse ecosystem than we had known when we looked only at the bacterial communities," Segre says.

The survey turned up dozens of types of fungi — far more than anyone knew were there. In most parts of the body, fungi from the genus Malassezia dominated. One part of the body had an especially wide array: the feet.

For example, researchers found at least 80 varieties on the heel, at least 60 between the toes and at least 40 on toenails. Elsewhere on the body, they only identified between two and five types of fungi.

The researchers aren't sure why feet are teeming with such a broad fungal assortment. One possibility is that temperature of our feet fluctuates a lot. Segre says there may be another, simpler explanation: "Even those of us who wear shoes a lot still walk around barefoot, either in our homes or in locker rooms. And there's just great exposure to fungi." 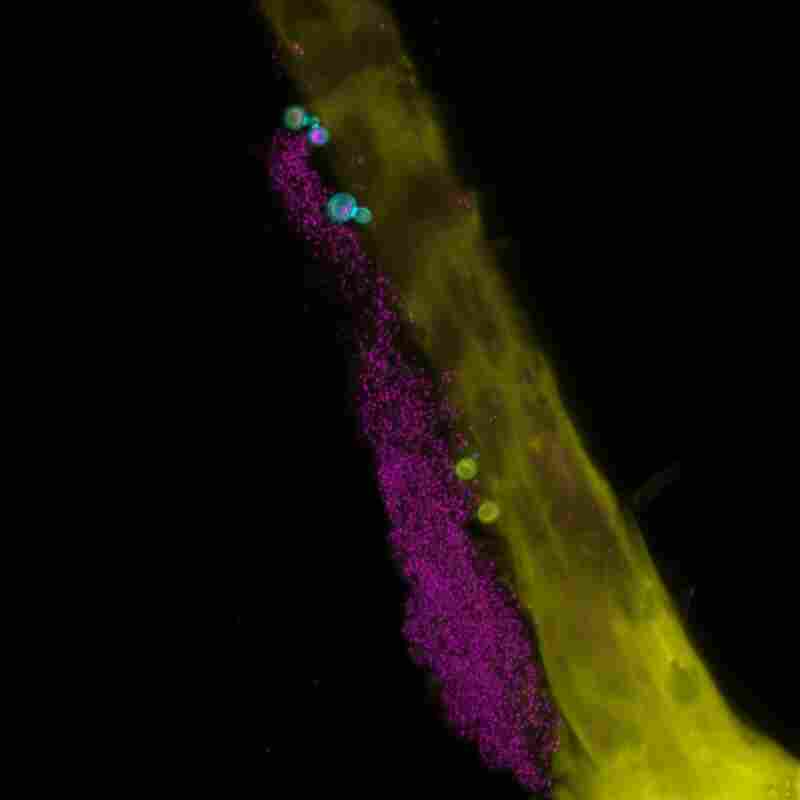 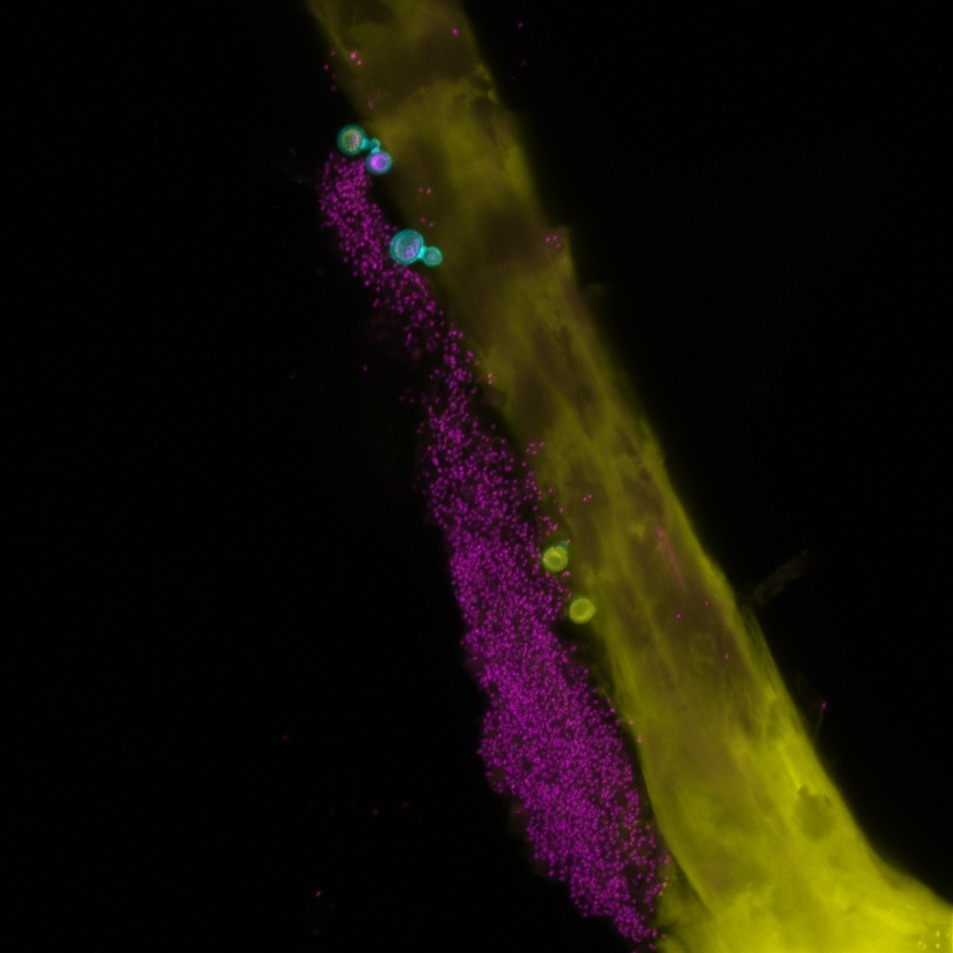 Bacteria (magenta) and fungi (cyan) on a human hair (yellow).

Whatever the explanation, the survey could eventually lead to new ways to treat millions of people who suffer from all sorts of skin conditions, such as toenail infections and athlete's foot.

"It really would certainly underlie the idea that you really do need to take very good care of your feet," Segre says. "So, for example, I do wear flip-flops when I walk around a locker room because I know from these studies that I don't actually want to share the fungi with the, you know, 20 other people who are showering after just going swimming."

The researchers were also surprised when they discovered that one volunteer's fungi were still out of whack seven months after she had taken an antifungal drug.

"We want to think there is a resilience of our bacterial communities, of our fungal communities, and that as soon as we stop medicating that they would bounce back into a state of health," Segre says.

But the volunteer's experience provides more evidence that this expectation is far from the case. It suggests that all the antibiotics, antibacterial products and antifungal medications people use these days may be affecting the good microbes that live on our bodies more than we think.

"The scale at which people are being exposed to antimicrobial drugs is really substantial," says infectious disease specialist Martin Blaser, at New York University. "And it would be surprising if there were not consequences from that."

Researchers plan to use this survey to explore a number of questions, including why women tend to get yeast infections when they take antibiotics. And why do some people get dandruff and some babies get diaper rash while others don't.

"There will be many further follow-up studies looking at the disease state on the skin and what kind of perturbations are associated with both the bacteria and the fungi there," says Joseph Heitman of Duke University, whose research focuses on microbial pathogens.

The results may also yield insights into skin cancer, he says. "What if we were to find the microbes on the skin either increase or decrease the risk for skin cancer, for example? That might be very important information to have," Heitman says.