Accessibility links
Researchers Find Bird Flu Is Contagious Among Ferrets : Shots - Health News The virus's ability to move between these mammals might not bode well for humans. So far, it appears that H7N9 doesn't pass easily between people, but it could mutate over time and pose more of a threat. 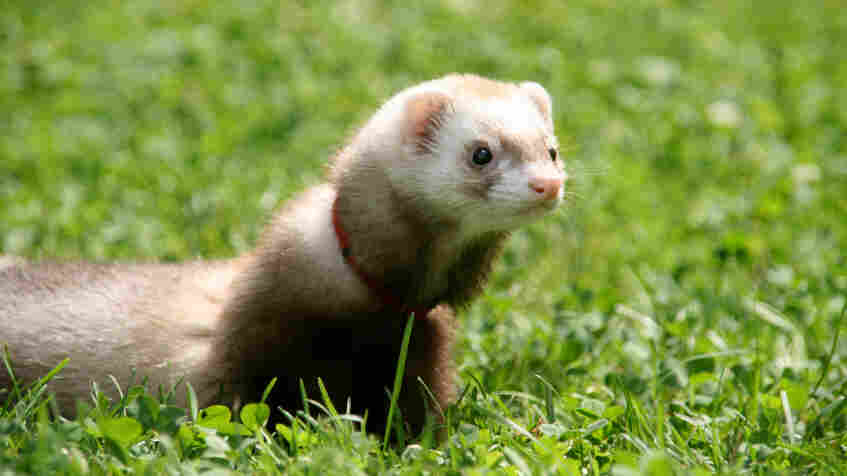 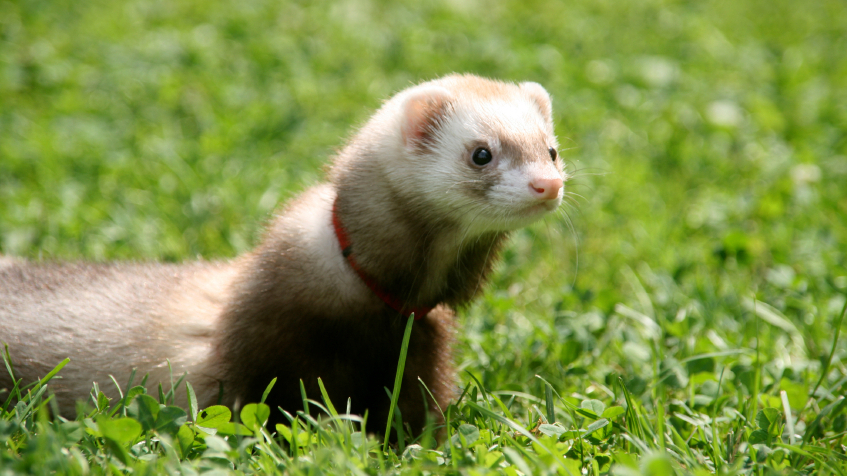 Of ferrets, men and bird flu.

Scientists have completed the first assessments of how readily the H7N9 flu virus in China can pass among ferrets and pigs. The mammals provide the best inkling of how dangerous these bugs may become for humans.

The news is both bad and good. They've found the new bird virus is easily passed between ferrets sharing the same cage.

"This is a more infectious virus — it has a higher intrinsic transmissibility [among mammals] — than most of the avian viruses we've seen in the past," Dr. Richard Webby, a study co-author, tells Shots.

But the saving grace, so far, is that H7N9 doesn't travel very well through airborne secretions from sneezing and coughing. It requires direct, intimate contact for infection.

Researchers have found that pigs, which often serve as incubators of flu strains that go on to cause big outbreaks in people, can get infected with H7N9. But infected pigs don't pass it on very well, either through direct contact with other pigs or through airborne secretions.

This all fits with the picture that has emerged in China this spring, where H7N9 has so far sickened 131 people and killed 36.

At least three-quarters of those victims apparently got the virus from contact with poultry or markets selling live chickens. Only a few seem to have gotten it from family members. Apparently, no one has been infected by breathing the same air as an infected person.

The new data, published online by the journal Science, come from researchers in China and collaborators in North America. Webby is an influenza expert at St. Jude Children's Research Hospital in Memphis. Other labs have reportedly found the same thing.

But other recent data suggest H7N9 may be evolving into a virus with more ominous implications for public health.

Several Chinese scientists have found a few tiny mutations in two H7N9 viruses they retrieved from a woman who butchered poultry and from chickens in a neighboring stall in a live-poultry market in Nanjing — a city in the epicenter of the Chinese H7N9 outbreak.

Both of these mutations are in a protein called hemagglutinin, found on the surface of flu viruses.

"These findings suggest that the novel virus had been evolving and might, with a few amino acid mutations, adapt to humans," say the authors of a letter published Wednesday evening by the New England Journal of Medicine.

Webby says the H7N9 viruses analyzed so far have receptors that allow them to latch onto cells of both birds and humans. To transmit efficiently between humans, the virus has to lose its avian gene sequences. The Nanjing virus samples seem to be on the way to doing just that.

"On a scale from 1 to 10 — from an avian virus with no potential to infect humans to a fully human-adapted strain — we don't know exactly where this H7N9 is," Webby says. "But I think we can safely say from these data that it might be closer to 10 than the avian viruses we've seen infecting humans in the last decade."

In other words, he thinks H7N9 is close to becoming capable of causing a catastrophic flu pandemic.

Webby says the viruses that caused the 1918 and 1957 flu pandemics had precursors that acquired "humanized" traits "in a stepwise fashion" as H7N9 may be doing.

The latest data add urgency to efforts to squelch the virus's spread among Chinese poultry. Otherwise, H7N9 could become entrenched in poultry populations, as the H5N1 avian virus has.

If that happens, "the opportunities for the H7N9 virus to evolve to acquire human-to-human transmissibility, or to be introduced into pigs, would greatly increase," the authors of the Science paper write.

But how can the spread of the virus in China's live poultry markets be suppressed? Webby says there are ways short of shutting down these markets altogether. "It's not easily done, but it can be done," he says.

In Hong Kong, authorities defeated H5N1 poultry infections by segregating chickens and waterfowl, and by having "clean days" when no imports of new birds are allowed while markets are disinfected.

But the political will has to be mustered to undertake such changes across a wide swatch of China. And Webby worries that the pressure to undertake them will wane as the number of human cases of H7N9 goes down — whether as a result of temporary market closures, as Shanghai has done, or the advent of summertime temperatures less congenial to flu, or both.

"There's a bit of a worry in my mind that the urgency to do something about this will drop," Webby says. "We really need to get on top of this virus and get it out of animal populations. Otherwise it's just not going to go away."