Accessibility links
An Artist's Brush Reveals Tales Of Struggle And Survival : Shots - Health News There's a story to tell about every family's encounters with the health care system. Some are tragedies. Many are a blaze of enduring hope in the face of suffering and loss. Artist Regina Holliday brings those secret stories to life in her Walking Gallery.

An Artist's Brush Reveals Tales Of Struggle And Survival

An Artist's Brush Reveals Tales Of Struggle And Survival 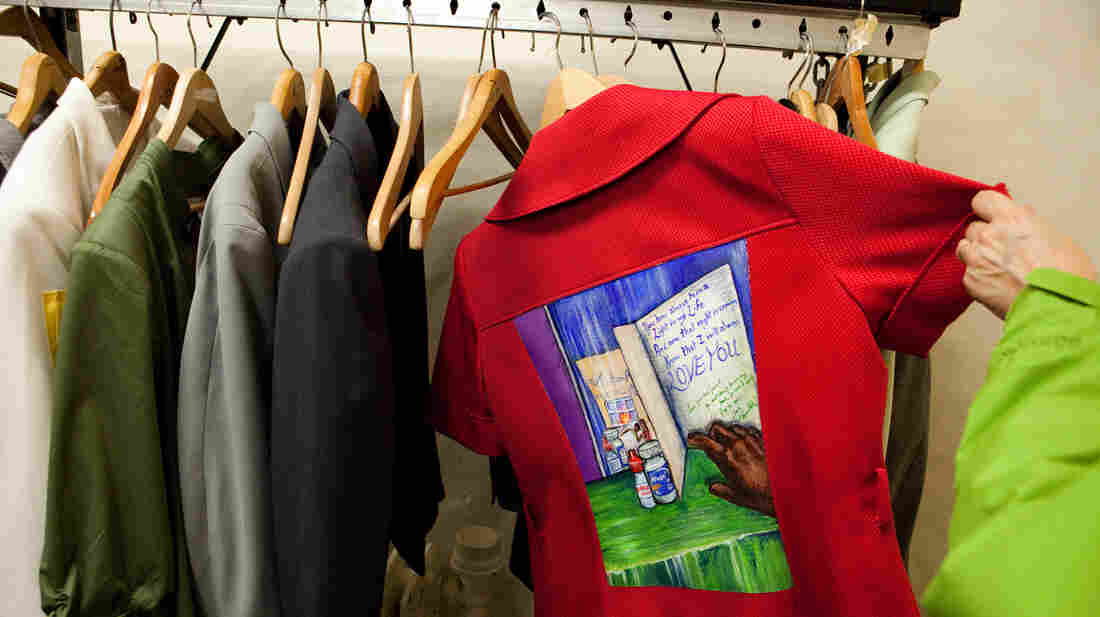 More than 200 people have Walking Gallery jackets that tell the story of their experiences with health and the medical system. Maggie Starbard/NPR hide caption

Most health policy meetings are a dull gray snooze of business suits talking data. They seem a million miles removed from making sick people healthy. But this week in Washington, D.C., some of those meetings was enlivened by a sudden flash of color.

The back of one woman's suit jacket bore a painting, a Renoir-like portrait of a mother and child. A man's blazer showed him reborn after years of despair. Another woman's jacket portrayed a young man holding his organ donor card. A petite redhead's jacket blazed with a scarlet letter "A."

It was an insurrection of sorts, the latest incarnation of something called the Walking Gallery. The paintings on the back of jackets tell tale about the wearers' odysseys through the labyrinth of the American health care system.

The paintings speak of struggle, frustration and loss. But there's also perseverance, great love and triumph in the face of tragedy.

Gregg Masters has gained control after years of struggling with depression. Lygeia Ricciardi has a healthy, happy child, though her attempt to have a natural childbirth in a hospital didn't work out as she planned. And Alisa Hughley convinced her parents that they should allow her brother's organs to be donated after he was murdered at age 21. As a result, she says, "four lives were saved."

The Walking Gallery is the vision of artist Regina Holliday. In the past two years she has painted more than 200 jackets, with the owners promising to wear them to health care meetings two or three times a year.

Wearers include doctors, health policy types and regular folks. Their jackets tell the stories not just of their work life, but of their personal experiences with health care. "It's your own story," Holliday says. "And it's your own jacket."

"I wear my jacket proudly," says Eric Topol, a cardiologist and professor at the Scripps Research Institute in La Jolla, Calif. "It gets people talking about what we can do to get patients taking charge." His jacket shows him standing inside a person's chest cavity while holding a smartphone. He says it captures his passion for letting people use their own medical data.

Holliday first applied art to the iniquities of the health care system after her husband Fred died of kidney cancer at age 39. Infuriated by how Fred had been made wretched by inadequate and uncoordinated care in 2009, she painted a huge mural about his death on the wall of a gas station near her home in Washington, D.C. NPR's Joe Shapiro told the story of that mural, 73 cents.

As a widow with two young boys, Holliday could have stopped there. Instead, she has become a patient advocate, speaking to medical groups and painting at medical meetings. The idea of painting on the back of business suits came to her as a way to bring the subversiveness of art to the corporate suite.

Her own jacket, the one with a scarlet A, reflects both her identity as an artist, and an experience when Fred was dying in the hospital. A doctor was angry that Regina had asked a hospital social worker for help getting paperwork done for desperately needed disability insurance, and that she had been asking questions about her husband's care. The doctor said: "I understand Little Miss A-Type Personality has been asking questions."

Holliday is still asking questions, and still painting, including a painting at the MedCity Engage conference this week that included references to Oklahoma, her home state, the deadly twisters there, and one of the organizers' loss of a child in a miscarriage. A Medstartr campaign is raising money for a documentary on the Walking Gallery.

"I know so many patients who suffered in silence while the world turned its back on their suffering," Holliday writes of the Walking Gallery. "Now, when you turn your back on a patient you are actually communicating at a far deeper level, for on your back you portray the patient voice."