Accessibility links
Girl's Need Breathes Life Into Debate Over Organ Allocation : Shots - Health News Sarah Murnaghan, 10, has been moved to the adult waiting list for lung transplants. Murnaghan's parents are thrilled for their daughter, who's clinging to life. But a federal judge's ruling is also raising a number of concerns.

Sarah Murnaghan, on May 30, as she and her parents marked the 100th day of her stay in Children's Hospital of Philadelphia. Murnaghan family/AP hide caption 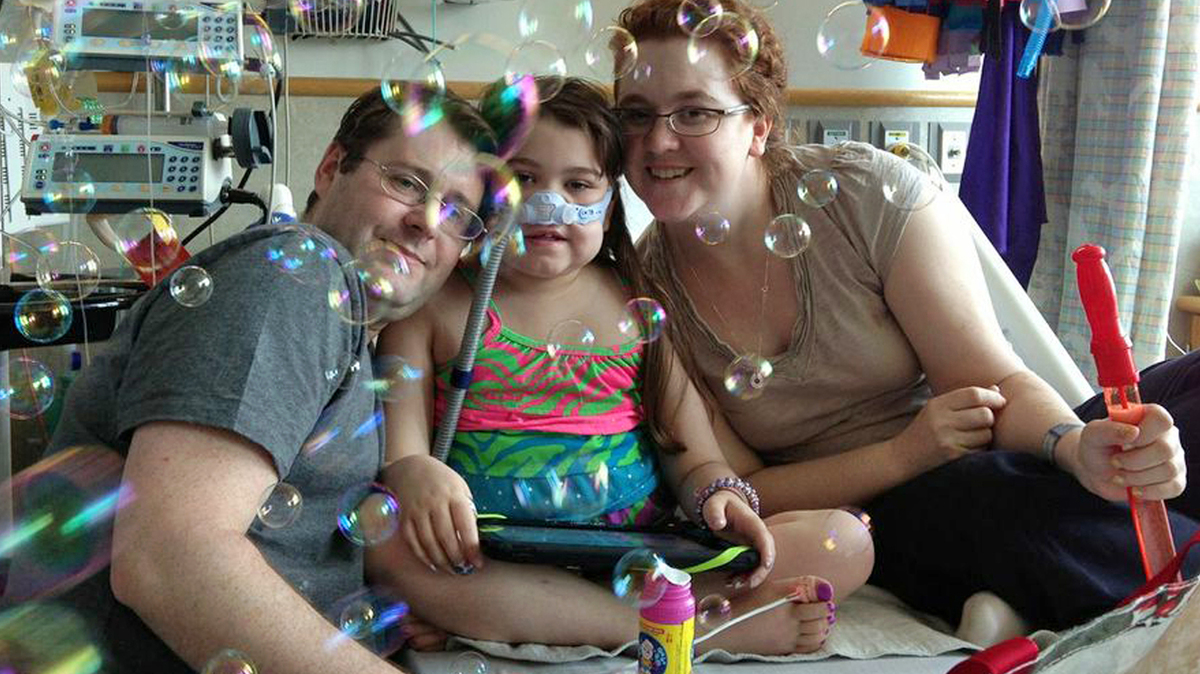 Sarah Murnaghan, on May 30, as she and her parents marked the 100th day of her stay in Children's Hospital of Philadelphia.

The case of a Pennsylvania girl who is dying from cystic fibrosis has sparked an emotional debate over how the nation allocates lungs for transplantation.

Ten-year-old Sarah Murnaghan is in intensive care at Children's Hospital of Philadelphia awaiting a lung transplant. Under the current rules, lungs from adults are offered to other adults and adolescents before being offered to children younger than 12.

But Murnaghan's parents challenged that rule, and on Wednesday U.S. Judge Michael Baylson in Philadelphia took the unprecedented step of issuing a temporary order requiring the girl to be placed on the adult list.

"I can safely say I've never been hugged harder and longer in my life," says the family's attorney, Stephen Harvey. "They're very happy."

But Harvey says Murnaghan, who was diagnosed with cystic fibrosis when she was 18 months old, remains gravely ill, and the family hopes that suitable lungs will become available soon.

"She's very sick. If she doesn't get a donated lung, she will likely die within weeks," Harvey says.

As word of Murnaghan's plight spread, members of Congress started pressuring the federal government, which oversees the organ allocation system, to intervene. Earlier this week, Health and Human Services Secretary Kathleen Sebelius was grilled about the case during a congressional hearing.

"Occasionally we have the opportunity to truly affect, in a singular and specific way, somebody's life," said Republican Tom Prince of Georgia. "And Madame Secretary, I would suggest you have that opportunity with Sarah Murnaghan."

Sebelius said she understood the family's desperation and the congressman's concerns. "I can't imagine anything more difficult. We have far too few donors and far too many desperately ill people," Sebelius said.

But Sebelius declined to order the transplant network to change the rules. Instead, she asked the network to take a look at the policy — a process she said could take months. In the meantime, Harvey went to court.

"All we're asking for is that children be treated fairly, and that they stand in line for this large pool of lungs donated from adults based on the severity of their medical condition, just like people over 12," Harvey says.

And after holding a hearing on the request Wednesday, the federal judge ordered that Sarah be placed on the adult list at least for the next 10 days, after which he'll hold another hearing on whether to extend his order.

But the judge's decision is raising many concerns, including a technical one. Most children who need lungs can get them from other children, avoiding the need to figure out how to make an adult lung fit into a child, says Stuart Sweet, a pediatric lung transplant surgeon who is on the transplant network's board.

"Lungs from adults require trimming or use of lobes, rather than the whole lung, and that approach is not commonly used in pediatric lung transplantation," he says. "There's an added surgical complexity to using lobes rather than lungs."

Others in the medical field worry about the precedent the case sets. Bioethicist Arthur Caplan of New York University envisions others asking to get their children on the lung list, too.

In fact, on Thursday, the same judge ruled that an 11-year-old boy at the Philadelphia hospital be put on the adult lung transplant list.

The organ transplant network is meeting Monday to review its policy.