Accessibility links
Scientists Go Medieval To Solve Ancient Leprosy Puzzle : Shots - Health News Looking for clues to to modern-day leprosy, scientists dig up a 500-year-old mass grave and scan for ancient strains of bacteria in human remains. They find that the bacteria that cause leprosy haven't changed, humans have. 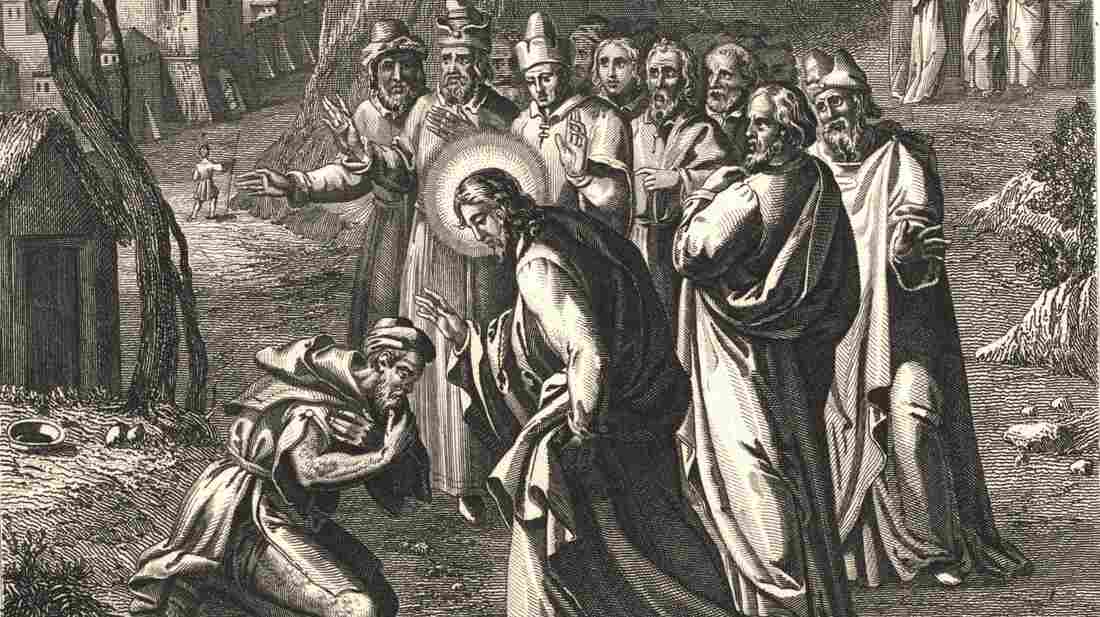 A woodcut from the 1800s, Healing the Lepers, depicts the common tableau of Jesus healing a leper as his disciples look on. Images from the History of Medicine hide caption

toggle caption
Images from the History of Medicine 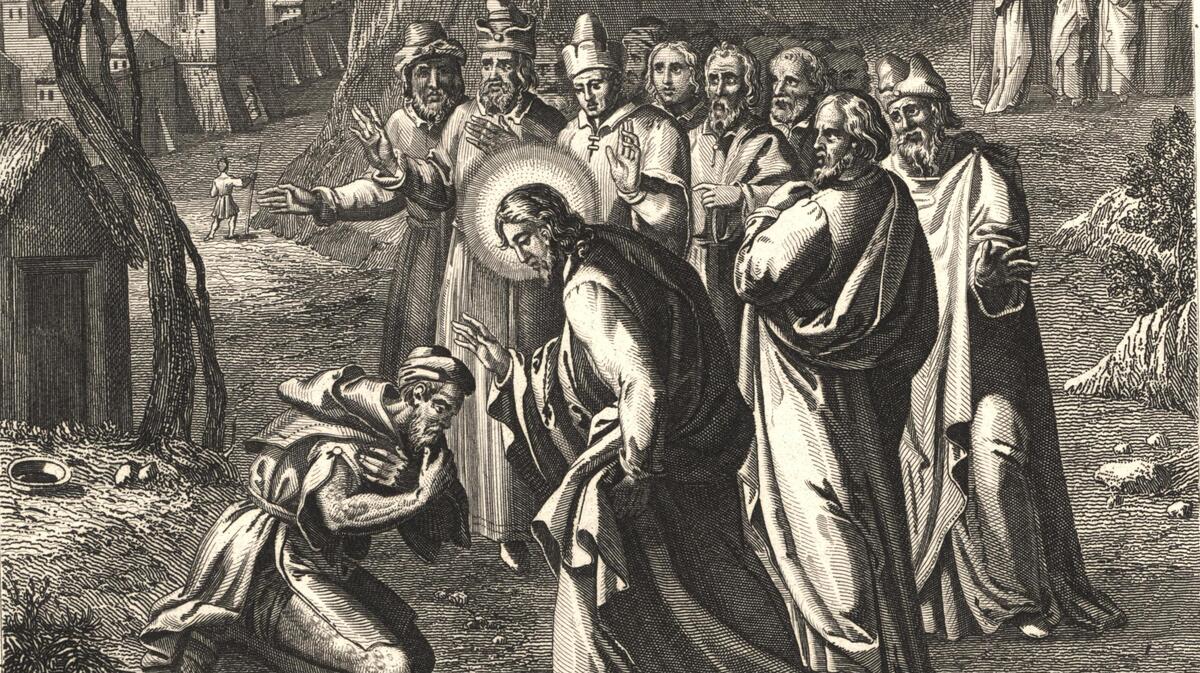 A woodcut from the 1800s, Healing the Lepers, depicts the common tableau of Jesus healing a leper as his disciples look on.

Images from the History of Medicine

Look through a series of 15th-century woodcuts, and you'll find that the leper is as much an icon of medieval art as the crown or the cross.

Leprosy was so common in Europe during the Middle Ages that it's estimated 1 in 30 people was infected with the bacteria. But by the turn of the 16th century, after the Crusades had swept across Europe, the disease mysteriously disappeared. And it never returned.

In Papua New Guinea this poster promotes awareness of leprosy, a disease that is still a concern there.

Courtesy of the Department of Health, Papua New Guinea

This left scientists puzzled. Did the bacteria mutate to become less harmful, or did Europeans become resistant to the germs?

To answer this question, a team of biologists and archaeologists probed the mass grave of a 600-year-old leper colony for traces of ancient leprosy DNA. They found leprosy didn't change; we did.

A study published in Science Thursday shows that the ancient leprosy genome is nearly identical to the genome of modern-day leprosy.

Extracting a pathogen's DNA from human skeletons is nearly impossible, says microbiologist Stewart Cole of the Ecole Polytechnique Fédérale de Lausanne. "The material was a mixture of human DNA, microorganisms and contaminating DNA from other bones and surrounding soil," he says.

"This was difficult," Cole said, but after sorting through enough material, eventually they hit the jackpot in the form of a decayed tooth.

Less than 0.1 percent of the tooth's DNA came from the leprosy pathogen. Still, the team was able to reconstruct the ancient leprosy genome using this 600-year-old chomper.

The old form of leprosy was almost indistinguishable from the one that infects people today.

"If the explanation of the drop in leprosy cases isn't in the pathogen, then it must be in the host, that is, in us," Cole says.

Indeed, scientists believe that a certain gene makes some people highly resistant to leprosy. This particular gene, Cole says, is prevalent in Europeans.

To stop a disease, Cole says, it's helpful to understand its origins. "Having information about the specific genes and proteins in the disease can help to determine preventative and therapeutic strategies, as well as possible drug resistances." 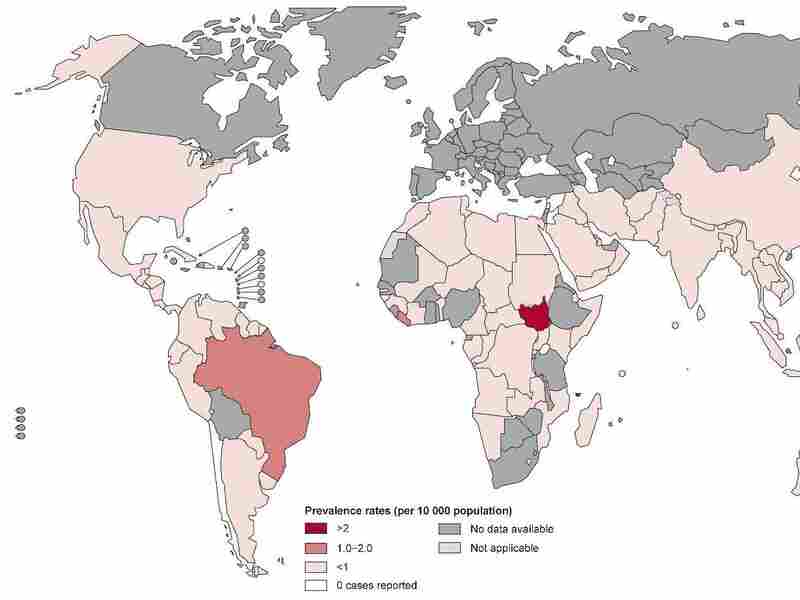 There were nearly 200,000 cases of leprosy around the world at the beginning of 2012. Courtesy of the World Health Organization hide caption 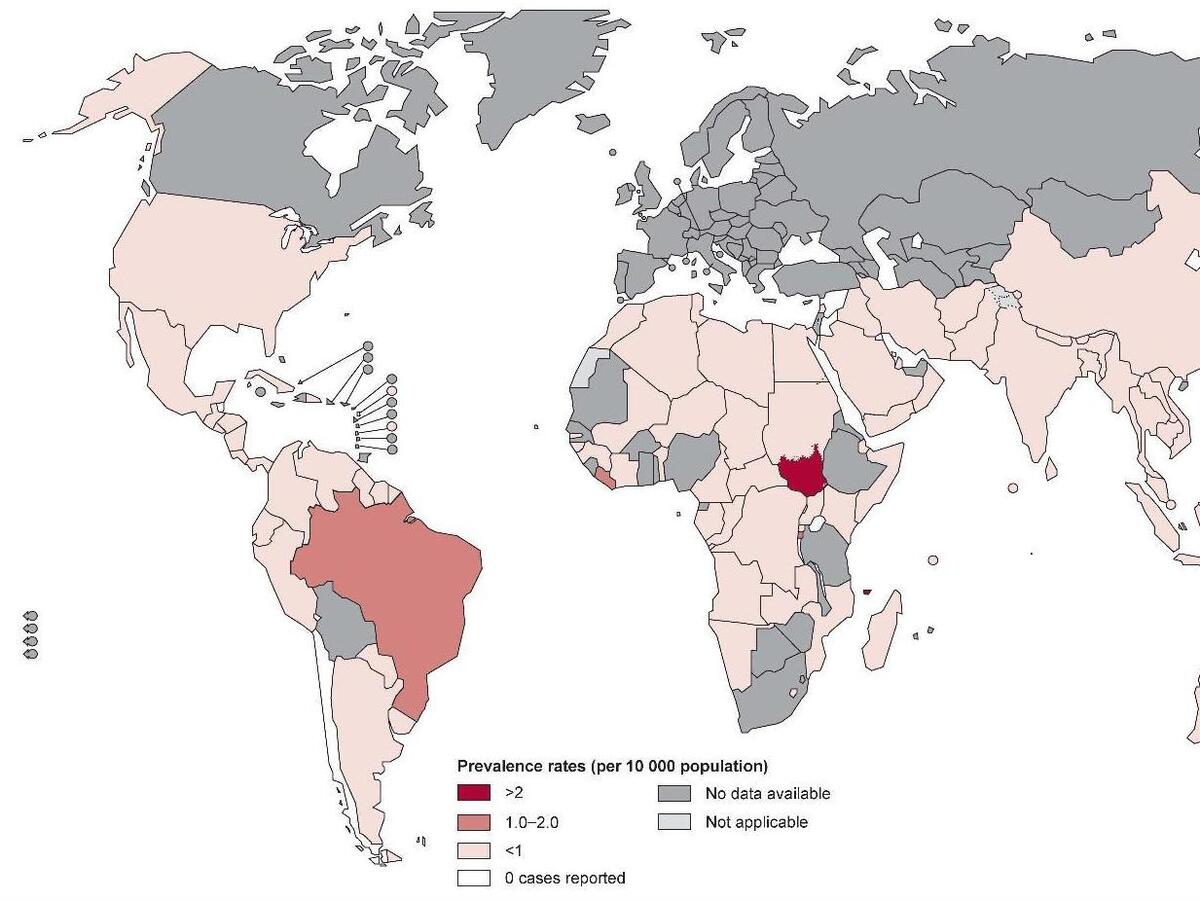 The same methods used to uncover ancient leprosy could also be useful in exploring ancient strains of tuberculosis, syphilis and the bubonic plague.

The bacteria that cause leprosy, also called Hansen's Disease, can live in the human body for up to 20 years without any physical symptoms. But eventually the infection causes severe pain, nerve damage and often a crippling loss of bodily tissue.

Today, leprosy can be treated by antibiotics. Although the beginning of 2012 saw fewer than 200,000 cases reported, it remains a global concern. A historically stigmatized disease, leprosy often goes undiagnosed and untreated, until it is in its advanced stages.