Accessibility links
Vaccine Against HPV Has Cut Infections In Teenage Girls : Shots - Health News A vaccine against a virus that causes cervical cancer has cut infections among teenage girls by over half in the first four years of use, scientists report. Only about one-third of girls in that age group have received the recommended shots. 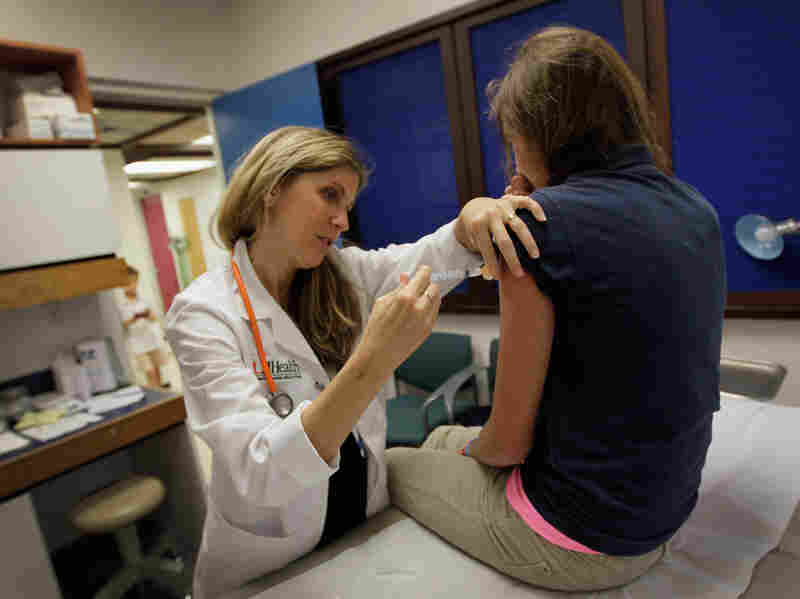 A 13-year-old girl gets an HPV vaccination from Judith Schaechter, a pediatrician at the University of Miami, in 2011. Joe Raedle/Getty Images hide caption 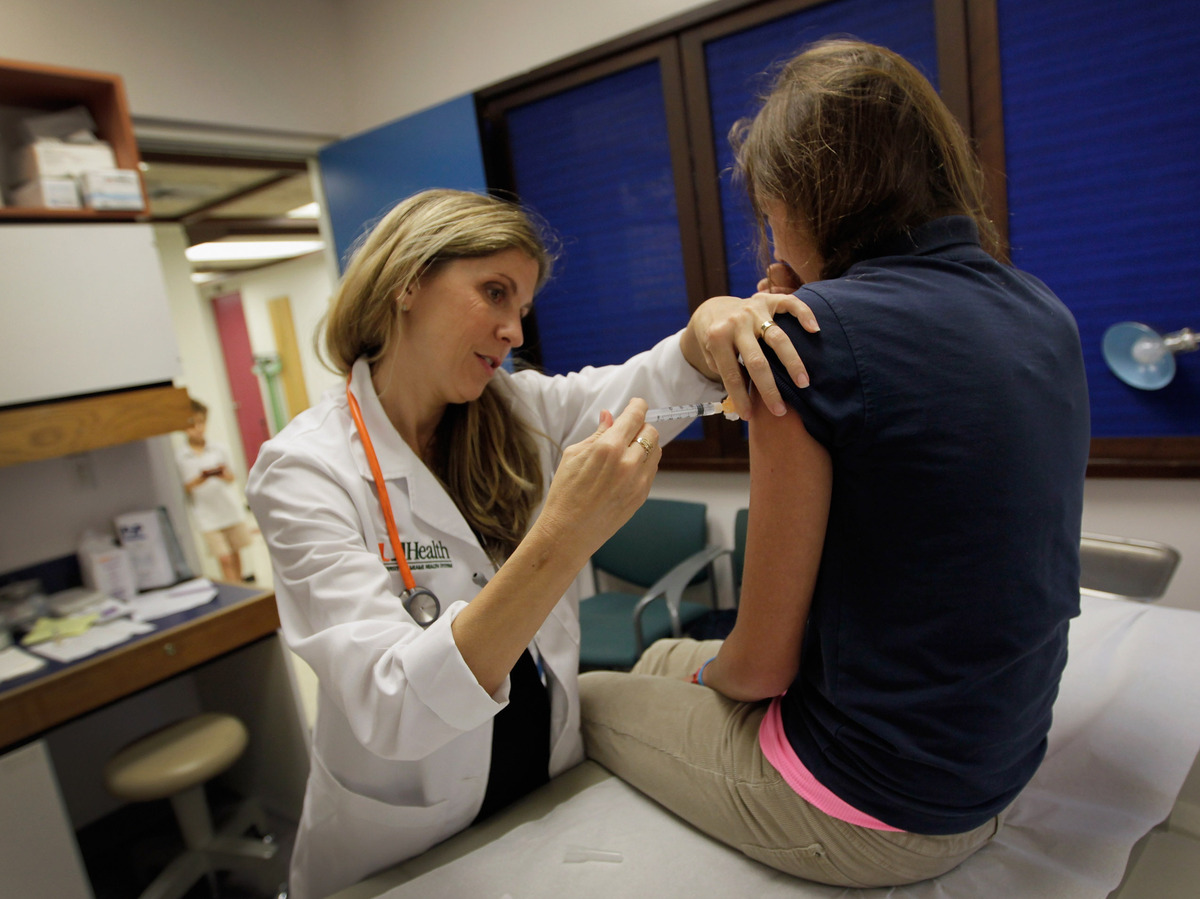 A 13-year-old girl gets an HPV vaccination from Judith Schaechter, a pediatrician at the University of Miami, in 2011.

A vaccine against human papillomavirus — the most common sexually transmitted infection and the cause of almost all cervical cancer — is dramatically reducing the prevalence of HPV in teenage girls.

The first vaccine against HPV, Merck's Gardasil, was approved by the Food and Drug Administration in 2006. Cerverix, from GlaxoSmithKline, was approved in 2009.

In the first four years of immunizations, infections from the four strains of human papillomavirus targeted by the vaccines plummeted by more than half among 14-to-19-year-olds in the United States.

Federal health officials say they were surprised by the number since only about 1 in 3 girls in this age group has received the full three-dose course of the vaccine. About half have received a single dose.

Dr. Thomas Frieden, director of the Centers for Disease Control and Prevention, acknowledges that the number of girls who have gotten the HPV vaccine is "very disappointing" and "certainly not good enough."

Still, Frieden says, "The vaccine works and works very well." The findings of the CDC study were released Wednesday in the Journal of Infectious Diseases.

The vaccine has been controversial, with some parents worried about possible health risks, and others worrying that vaccination could encourage earlier sexual activity.

The study didn't find a decrease in the HPV strains covered by the vaccine in other age groups, a clue that the vaccine is responsible for the decrease among teenagers.

Researchers also didn't find any decrease in sexual activity among girls in the target population that might explain why HPV prevalence is down, from nearly 12 percent to just over 5 percent.

The current recommendation is that girls get the HPV vaccine when they are 11 or 12, before the initiation of sexual activity, when the vaccine produces the best protection. Females up to age 26 are urged to get the three-shot course if they have not received the vaccine earlier.

The vaccine costs between $128 and $135 a dose, or around $400 for the full course, on the private market. Many insurers cover HPV vaccination, and the federally sponsored Vaccines for Children program provides it free of charge for qualified patients.

CDC officials say they intend to use the new results to press for wider use of HPV vaccines. The goal is to get 80 percent of adolescents fully vaccinated.

Frieden says the payoff will be tens of thousands of fewer cases of cervical cancers and deaths.

"Of girls alive today between the ages of zero and 13, there will be 50,000 more cases of cancer if we don't increase the rates to 80 percent," Frieden says. "And for every single year we delay in getting to 80 percent, another 4,400 women are going to develop cervical cancer in their lifetimes — even with good screening programs."

CDC officials say that HPV vaccines have a very good track record for safety following distribution of 56 million doses in this country.

"We have a very clear idea of the safety," Frieden says. "We've looked at all the adverse events that have been reported. Virtually all have not been serious. Among the serious events, the main issue has been fainting, redness and swelling at the injection site and other temporary symptoms."

Last week Japanese health officials suspended their recommendation to vaccinate girls between 14 and 19 against HPV after some reports of pain and numbness following injection. Japanese officials say they want to investigate a possible link.

"The outcomes they were concerned about are things we have looked for in our data system here in the U.S.," says the CDC's Dr. Cindy Weinbaum. "We found a total of about a dozen reports that related to something like regional pain syndrome such as Japan was reporting."

Weinbaum says the CDC found "really no consistency among them that would suggest anything specifically related to the vaccine."

The CDC has investigated 42 reports of deaths among HPV vaccine recipients.

"The cause of these deaths has been very varied," Weinbaum says. "It's everything from cardiovascular to infectious, neurologic and hematologic. Again, there's no consistent pattern of deaths that have occurred after vaccination that would give us any cause to be concerned" that the vaccine was responsible.