Accessibility links
Health Exchange Outreach Targets Latinos : Shots - Health News States and the federal government have a big job to do when it comes to explaining to the uninsured how to buy health insurance under the Affordable Care Act. The success of the law will be judged in part by how many Latinos sign up. 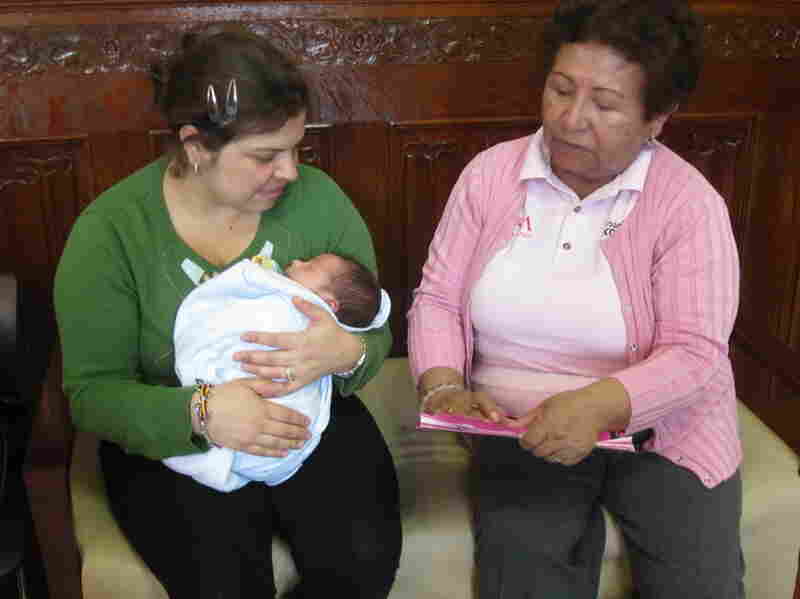 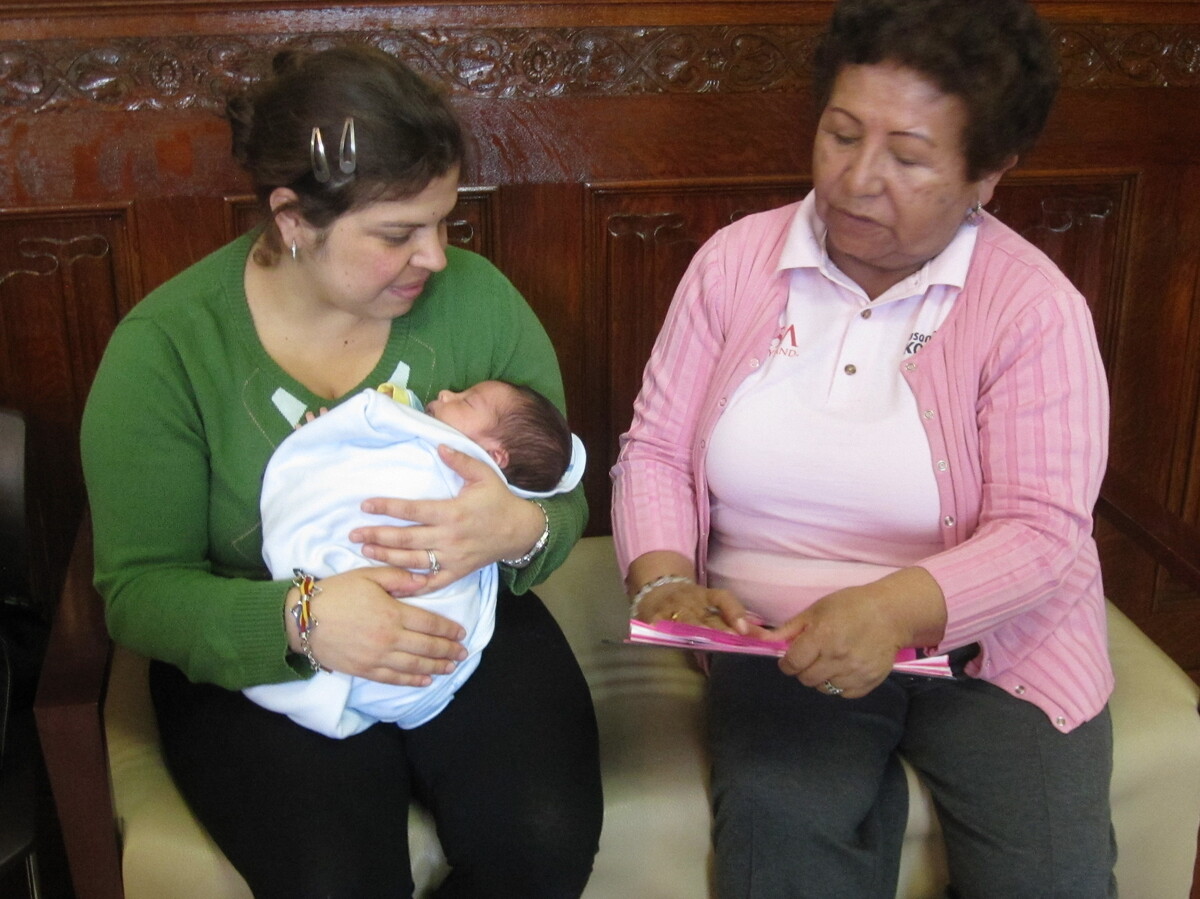 Elva Jaldin, a promotora, talks with Andrea Velandia about health. Soon Jaldin will help women like Velandia sign up for health insurance under the Affordable Care Act.

Andrea Velandia, 29, is just the sort of person the architects of the new health insurance marketplaces had in mind when they were thinking about future customers.

"We're very healthy. We don't have many issues," she says of her family. For the most part, she and her husband avoid the health system. "It's very expensive to go to the doctor to get a regular checkup," she says. "And you only have an option to go to the emergency room, which is even more expensive."

On Oct. 1, Velandia, who is from Colombia, will be able to sign up her family of four for a subsidized health insurance policy in the new Maryland Health Benefit Exchange, the state's online marketplace for insurance policies created under the Affordable Care Act.

And just as Latinos were crucial to President Obama's re-election in 2012, they are now key to the implementation of his health law.

The administration has made clear that the health law will succeed only if Latinos, like the Velandias, enroll. And it's pulling out all the stops to make sure they do. Health and Human Services Secretary Kathleen Sebelius will be making the rounds on Spanish-language media outlets to discuss the health law and the newly revamped CuidadoDeSalud.gov, the Spanish version of HealthCare.gov.

Latinos make up 17 percent of the total U.S. population, but nearly one-third of the nation's uninsured. They're also more likely to be young — nearly half of Hispanics are under the age of 26.

Their youth is important for the insurance pools to work. Young and healthy people need fewer medical services, and insurance companies can use their premiums to help subsidize coverage for older or sicker patients.

On a recent morning, Velandia visited the legal clinic at the nonprofit community organization Casa de Maryland in suburban Washington to get help filling out the last bit of paperwork to become a U.S. citizen. Sitting patiently with her toddler and newborn, she was approached by one of the center's promotoras — lay health promoters who help spread public health information in the Latino community. The woman offered Velandia information about breast cancer, healthy eating and diabetes.

In just a few months, Casa de Maryland's 20 promotoras will be expanding their outreach to include information on signing up for a new health insurance policy as well. The organization recently received a special grant from the state to help Latinos and other immigrants sign up for the exchange.

George Escobar, Casa de Maryland's health director, says he plans to use the grant to train his promotoras and hire a dozen new employees to work full time on enrollment.

Jennifer Ng'andu, who heads the health and civil rights policy project at the National Council of La Raza, says Latino organizations have their work cut out for them. The congressional health care debates of 2009 and 2010 created a sense of distrust in the community, she said, because there was a focus on how to keep undocumented immigrants from using any of the benefits under the health law.

She adds that the current congressional debate about overhauling immigration is adding more fear and confusion, especially in families where some people are citizens and others aren't.

On a recent trip to California, Obama highlighted an outreach campaign targeting Latinos that he says should be replicated in other states. Hispanic media groups Univision, Telemundo and ImpreMedia are publicizing the exchanges in a campaign on television, radio, mobile platforms and the Web. The administration says it could reach nearly 100 percent of Hispanic families in California.

The message will also reach the millions of undocumented Latino immigrants — but the law bars them from purchasing insurance on the exchanges, even with their own money.

Back in Maryland, George Escobar says the job of people promoting the exchanges doesn't end with enrolling people who qualify. The advocates also need to help those who can't use the exchanges find other options for care.