Accessibility links
Feds Bust Drug Websites Masquerading As Big-Name Chains : Shots - Health News The Food and Drug Administration and the U.S. attorney's office in Colorado cracked down on more than 1,600 websites that the feds say are breaking the law in the way they're selling prescription drugs, some of them counterfeits. 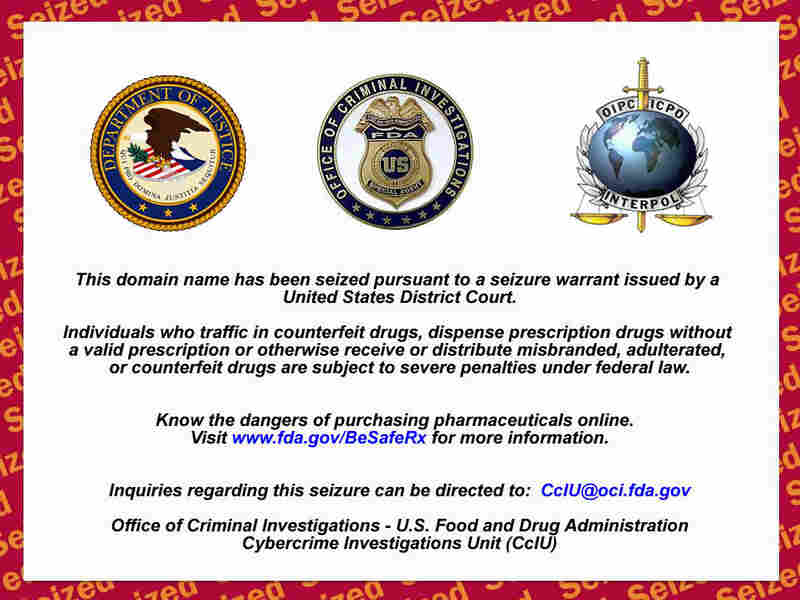 Federal authorities seized a bunch of websites belonging to online pharmacies that were allegedly breaking the law. FDA hide caption 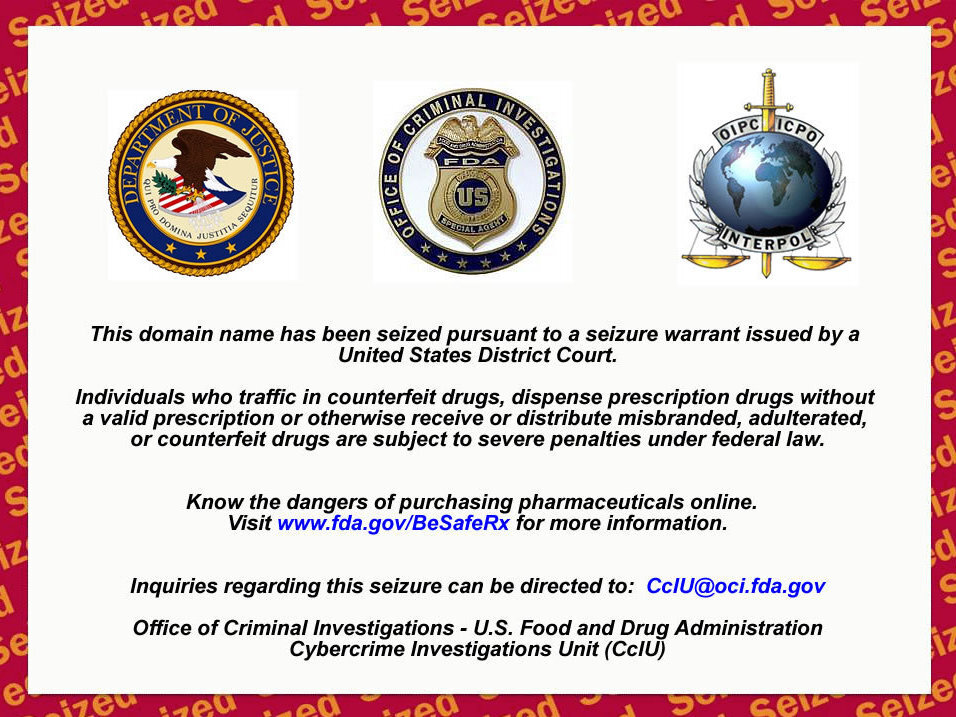 Federal authorities seized a bunch of websites belonging to online pharmacies that were allegedly breaking the law.

If you're looking for a deal on prescription drugs or tired of standing in line at the drugstore counter, maybe you'd be inclined to try an online pharmacy.

Perhaps you'd feel better about that choice if the site carried the name of a well-known chain, say, www.walgreen-store.com or www.c-v-s-pharmacy.com.

Well, not so fast. The Food and Drug Administration and the U.S. attorney's office in Colorado cracked down on those misleading sites, which weren't connected to their namesakes, and more than 1,600 others that the feds say are breaking the law by selling prescription drugs, some of them counterfeits.

"Illegal online pharmacies put American consumers' health at risk by selling potentially dangerous products," John Roth, director of the FDA's Office of Criminal Investigations, said in a statement. "This is an ongoing battle in the United States and abroad ...."

Many of the websites that were shut down claimed to be Canadian companies. But the FDA says that was a lie. The websites made use of bogus licenses and certifications to trick U.S. consumers, the FDA said.

The far-reaching bust is part of an international effort with a catchy, prehistoric name: Pangea VI. Pretty sure online drug sales weren't a problem back in the supercontinent's heyday.

This modern sweep was part of an International Internet Week of Action that wrapped up June 25.

The Interpol-coordinated Pangea project, now in its sixth wave, goes after sites hawking unapproved or risky drugs. Many of the them also sell drugs that legally require a prescription without actually getting one.

The FDA told one operator of many websites, including canadianfamilypharmacy.biz and cheapcanadianpharmacy.net, to stop selling drugs that violate U.S. laws. The agency's warning letter said a couple of impotence drugs being sold as "Levitra Super Force" and "Viagra Super Force" hadn't been approved by the agency. FDA also faulted the sites for selling "generic Celebrex." Problem is that Celebrex, a painkiller, is only available as a brand-name drug in this country, so a generic version is verboten.

Separately, Maine just enacted a law making it OK for residents to buy prescription drugs from other countries.

The FDA doesn't approve. "Medicine bought from foreign sources, such as from Internet sellers, from businesses that offer to buy foreign medicine for you, or during trips outside the United States, may not be safe or effective," an FDA spokesman told Shots via email in response to questions about the Maine law..

Here's a review of the Pangea operation coordinated by Interpol in 2012.