Accessibility links
You Ask, We Answer: Demystifying The Affordable Care Act : Shots - Health News Think buying health insurance through the Affordable Care Act will be confusing? You're not alone. NPR listeners asked questions that have been bugging them about state insurance exchanges and other new options. NPR health policy correspondent Julie Rovner explains how it's going to work. 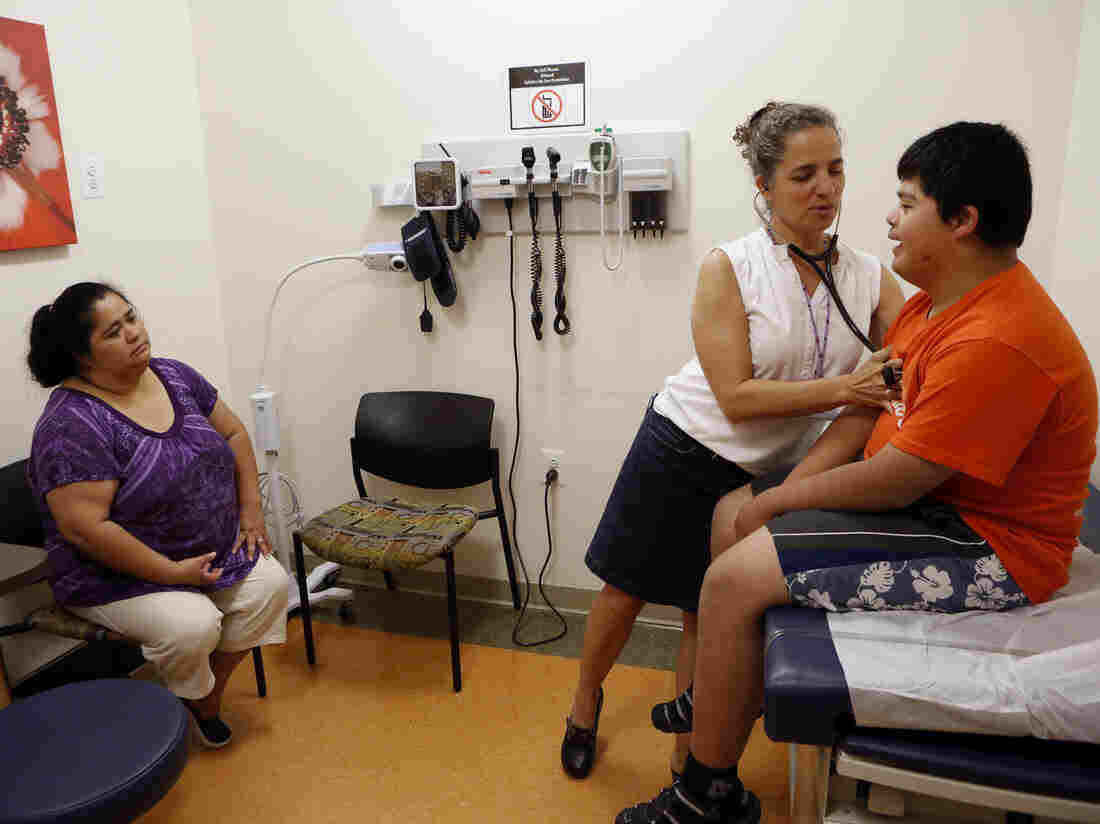 Families soon will be able to sign up for new health insurance options through the Affordable Care Act. In Washington, D.C., Dr. Cheryl Focht of Mary's Center performs a checkup of Jayson Gonzalez, 16, while his mother, Elizabeth Lopez, looks on. Heather Rousseau/NPR hide caption 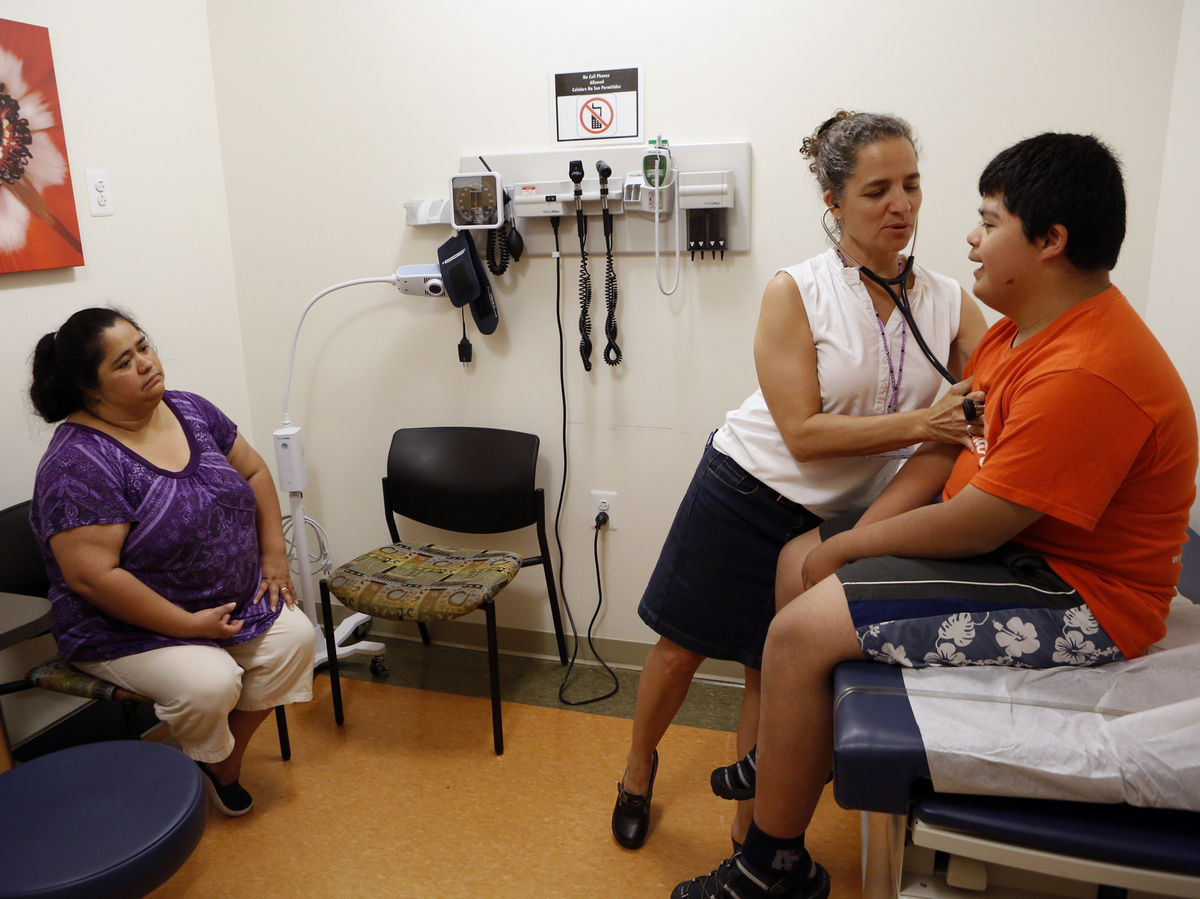 Families soon will be able to sign up for new health insurance options through the Affordable Care Act. In Washington, D.C., Dr. Cheryl Focht of Mary's Center performs a checkup of Jayson Gonzalez, 16, while his mother, Elizabeth Lopez, looks on.

The biggest changes in health insurance coverage under the Affordable Care Act are set to begin less than three months from now. Oct. 1 is when people can start signing up for coverage in new state health exchanges. The policies would kick in on Jan. 1, 2014.

It can all be a little confusing, we agree. So two weeks ago, we asked what you wanted to know about the health law.

You weren't shy; our inbox was stuffed. Here are some answers. If you don't see your question, or one like it, don't despair. We'll be doing this again periodically throughout the summer and fall.

You can email more questions to morningedition@npr.org.

"I'm currently employed part time, and I pay for my own health insurance, it's not through my employer," writes Marsha Harman of Chicago. "Will I be eligible to participate in the exchanges, or to take advantage of the tax credits to purchase insurance?"

This is one of the biggest misconceptions about the exchanges — that they're only for people who don't have insurance.

The big PR campaigns you'll be seeing in the coming weeks are aimed mostly at the uninsured, but the exchanges are most definitely also open to people who already buy their own insurance.

In fact, there are about 14 million people in the individual insurance market now. That includes people like Ms. Harman who work part time and don't qualify for benefits; people who are self-employed; or people who may have retired early and don't yet qualify for Medicare.

"I've heard that the amount for people to qualify for assistance in terms of income for individuals is as low as $11,000," writes Daniel Salgado of Eustis, Fla. He says he makes more than that, "but I don't think that my income necessarily would be enough that I could afford insurance on my own. Which is why I don't have it now. So I am wondering what sort of penalty I may face taxwise if I end up being in a pinch where I don't qualify for assistance by the government's definition, but still can't afford insurance on my own."

There are a couple of questions here. First, who gets financial help paying for coverage? Within the exchanges, there's a sliding scale of assistance. The smaller your income, the more help you get paying your premium. And Mr. Salgado is correct that for an individual, the subsidies start for people whose modified adjusted gross income is the equivalent of the poverty level, $11,490 or above. The help is reduced for people who make more money, and is cut off altogether at 400 percent of the poverty level, which is $45,960.

Bottom line: If you're an individual making up to $45,950, you should be eligible for at least a bit of a subsidy.

Now, there may be cases where someone doesn't qualify for help, or does qualify for help but still can't afford the premium. And those people won't be required to have insurance. The law says if you would have to spend more than 8 percent of your income on insurance, you are excused from having to pay any penalty for not buying insurance. There are several other types of people who are excused. And you can always seek a hardship exception if you think you truly can't afford coverage.

How much will the premiums be? That information is just starting to come in from some of the states. It will depend on a lot of factors — where you live, how old you are, whether you want to pay a higher premium and have a lower deductible, or pay a lower premium and have a higher deductible. And, of course, whether you're eligible for a subsidy. But from what we've seen so far, premiums for the standard "silver plan" seem to be averaging between $200 and $400 a month for an individual, without subsidies.

"I'm a veteran who participates in my regional healthcare plan through the military Tricare system," writes Rick Espinoza of San Antonio, Texas. "How would the ACA affect my health care?"

Not at all. The health law lays out several categories of what it considers minimum coverage that satisfies the requirement to have insurance. It's the coverage that about 80 percent of the population already has: employer coverage, including COBRA and retiree coverage; or a government program like Medicare, Medicaid, the Children's Health Insurance Program, VA benefits or Tricare. If you have any of those kinds of health insurance, you don't have to do anything, and you will have satisfied the requirement to have coverage.

Probably not. You know how President Obama has been saying, "If you like the coverage you have you can keep it?" That was shorthand for saying that the law was intended to maintain the existing system, where people get insurance through a job or through a family member's job. And to make sure that didn't change — for the first several years at least — people who are offered health insurance through an employer or a family member's employer are not allowed to go to an exchange to get insurance, except in very limited cases. Or they can go to an exchange, but they won't be eligible for any help paying their premiums.

Here's the tricky part: If the premium offered by the employer costs more than 9.5 percent of a person's household income — for coverage of an individual, not a family — or if the employer's plan pays less than 60 percent of the cost of covered benefits, then the employee is allowed to opt out of employer coverage and go to an exchange for health insurance. 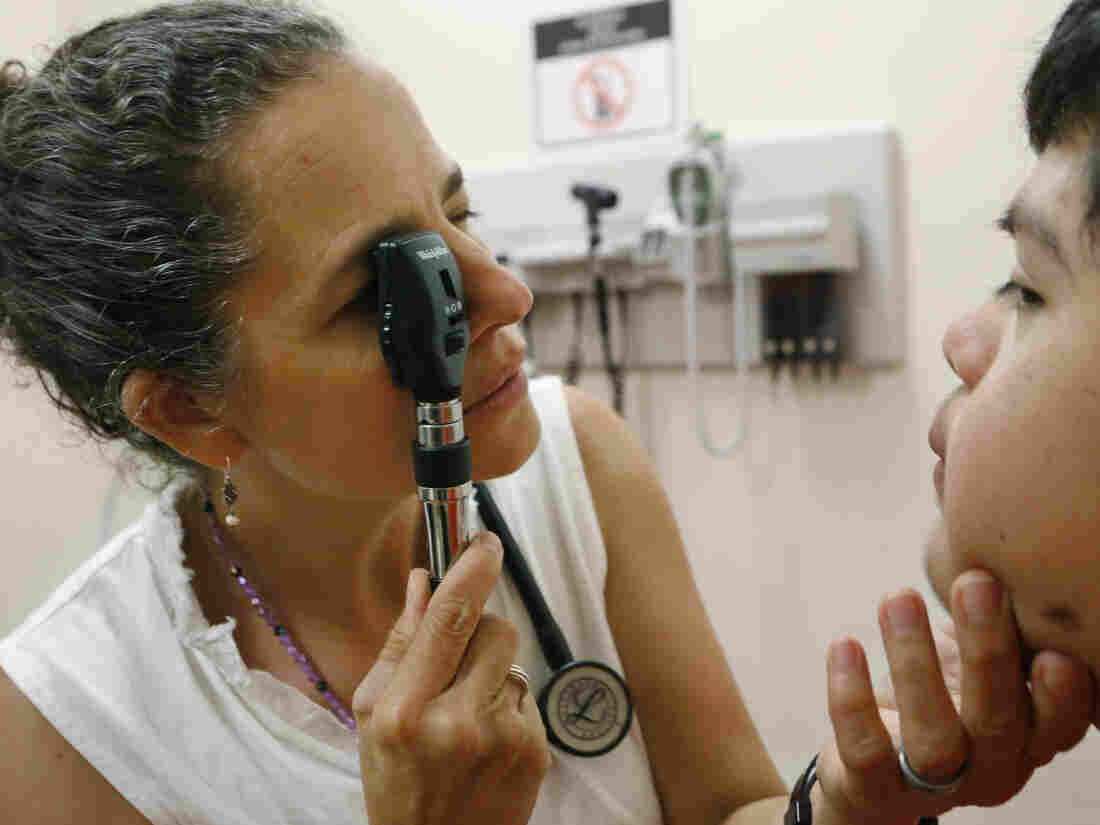 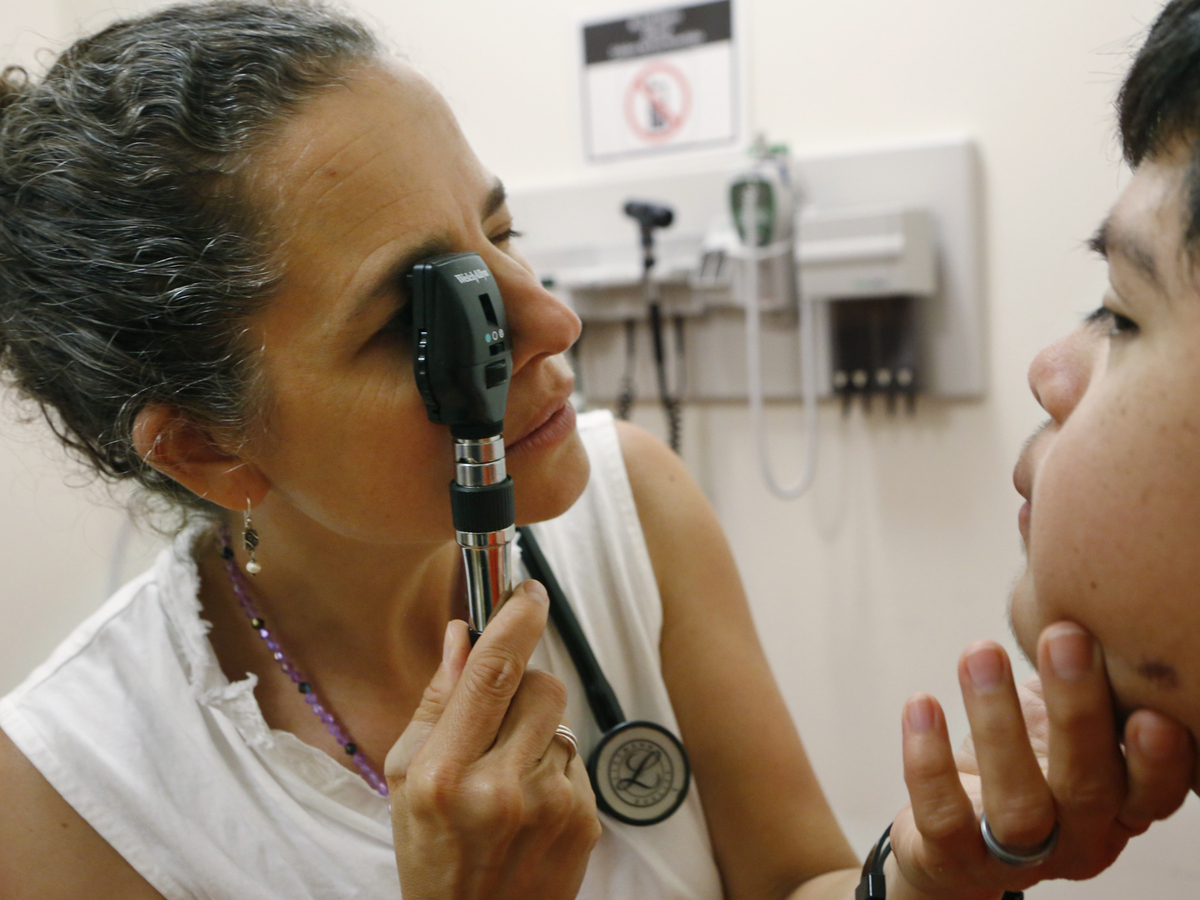 "I know that the insurance companies will no longer be able to turn down people with preexisting conditions," writes Martha Hoff of Takoma Park, Md. "But can they ask about them? And if so, will such people have higher premiums than those without them?"

In a word, no. Starting Jan. 1, 2014, discrimination based on preexisting conditions won't be allowed. You can't be turned down, and you can't be charged more. This will mean some healthy people will pay higher premiums, to offset the cost of those sicker people paying less. But the whole idea of requiring most people to have coverage is to get more healthy people into the insurance pool to spread the risk more broadly.

What To Know Now

Checking out options in coverage under the new health care law means getting up to speed on key terms.

Health insurance exchange. A statewide online marketplace where people can compare insurance plans side by side.

Exemptions. Not everyone has to be covered. Most people who already have insurance are fine. Members of some religious groups and people who truly can't afford coverage get a pass.

"I would like to know if it is true that some people, for so-called religious reasons, will be getting a free ride," writes Bob Ivey of Rotonda West, Fla. "If this is true, then who are these people, how many are there, and who will pay for their coverage?"

It is true that people who are members of certain religious groups are exempt from the requirement to have health insurance. Examples include the Amish and some Mennonite sects, because they don't pay into Social Security. But they are not "getting a free ride." Some members of such groups have a form of insurance through cooperative ventures or "health care sharing ministries," where members of a group pool together to pay each other's medical bills. Others may remain uninsured.

"I'd like to know how the ACA will affect me, a permanent resident of Japan," writes Bill Lonergan of Yokohama, Japan. "I've heard time and again that all Americans will be required to buy health insurance or face a penalty, but what about those of us living permanently or semi-permanently outside the USA?"

Not to worry, Bill. You and the estimated 6 million American expats were not forgotten by those who wrote the health law. And you don't have to rush out and buy health insurance. The law stipulates that anyone who lives outside the U.S. for at least 330 days in a 12-month period is "treated as having minimum essential coverage for the year or period" and thus meets the requirement to have health insurance.