Accessibility links
Finding Simple Tests For Brain Disorders Turns Out To Be Complex : Shots - Health News There are tests for heart attacks and diabetes, but few for brain disorders. Researchers are trying to change that, but are finding the hunt for biomarkers for mental illness to be a tough slog. Tests on the market, like ones for Alzheimer's, are not conclusive. 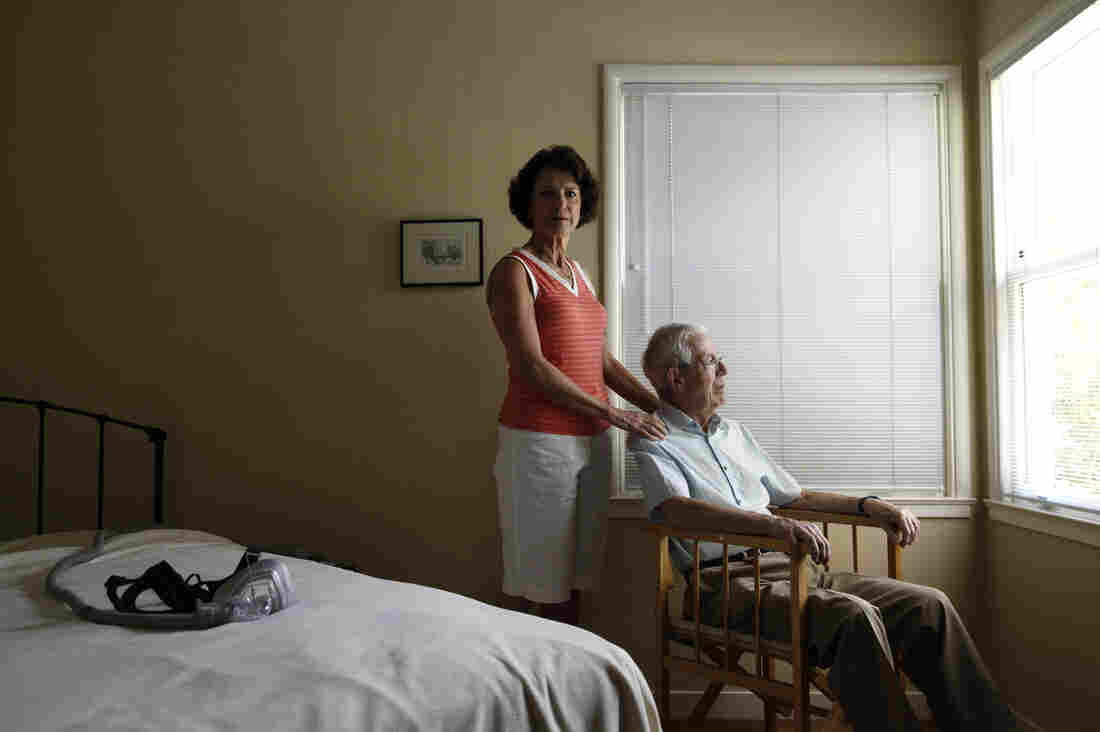 Anne Jones, 62, and Robin Jones, 73, at their home in Menlo Park, Calif. He took a test that revealed proteins typical of Alzheimer's disease. Ramin Rahimian for NPR hide caption 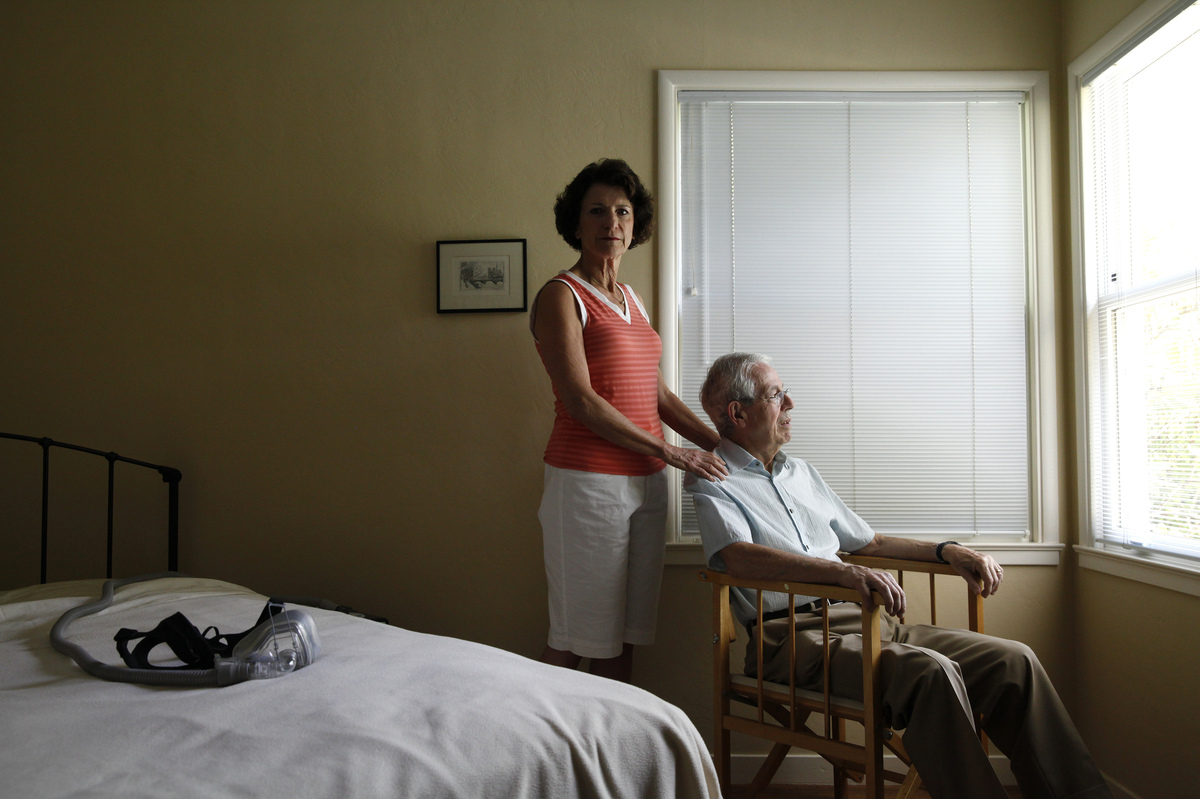 Anne Jones, 62, and Robin Jones, 73, at their home in Menlo Park, Calif. He took a test that revealed proteins typical of Alzheimer's disease.

But what if you're depressed? Or anxious? Currently there are no physical tests for most disorders that affect the mind. Lab tests like these could transform the field of mental illness. So far efforts to come up with biomarkers for common mental health disorders have proved largely fruitless.

That doesn't stop people from trying. Doctors are looking to create them, and patients are taking them, too, even though they know that existing biomarkers — for Alzheimer's disease, for instance — have serious limitations.

Six years ago, Robin Jones of Menlo Park, Calif., found himself in a parking lot. He had no idea where his car was. That was unlike him. A 67-year-old scientist who worked on nuclear energy plants, he was good with details. "It was, you know, I can't believe this," Jones says now. "I can always remember where the car is."

At work, he had a hard time finding the right words. He'd come home and tell his wife, Anne, "Something's different."

Robin Jones made an appointment at the Stanford Center for Memory Disorders, where he went through the standard cognitive evaluation for Alzheimer's disease — memorizing lists of words and so on.

Jones did pretty well on the tests. Better, says Stanford neurologist Michael Greicius, than you'd expect from someone in the early stages of the disease.

"He didn't fit neatly into this classic presentation of Alzheimer's disease," Greicus says, "and that's one of the reasons we talked fairly early on about looking at biomarkers."

When Greicius says "biomarkers," he's referring to a very new thing in Alzheimer's disease and a very old thing in many other diseases: objective lab tests. Those are physical measures that can help doctors understand what is going on in a patient's body. 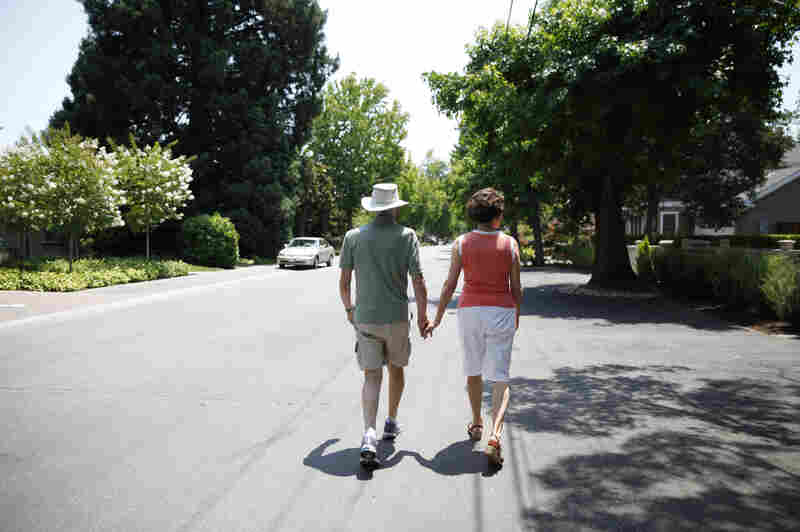 Robin and Anne Jones take a walk near their home. They say that an Alzheimer's biomarker test made it easier to plan for the future. Ramin Rahimian for NPR hide caption

One Alzheimer's test checks spinal fluid for proteins that are signatures of the disease. Another uses a PET scan to look for physical evidence of brain changes.

Jones chose the spinal fluid test. "It seemed to me it would sharpen up my understanding of what was happening," he says.

These tests don't offer the certainty of, say, a pregnancy test. Some people who test positive for the Alzheimer's-linked proteins show no outward signs of the disease.

But a positive result, in combination with symptoms like Jones experienced, is a pretty definitive diagnosis of Alzheimer's, Greicius says.

Researchers say the Alzheimer's tests, limited as they are, give a hint as to what may be ahead with other mental disorders, like bipolar disorder or post-traumatic stress disorder (PTSD).

As evidence, they point to the transformation that's happened with biological tests for disorders like heart disease and cancer.

"When I was a medical student 40 years ago, patients would come in with chest pains and we would spend a lot of time talking to them," says Dr. Michael Weiner, a professor in radiology and biomechanical engineering at the University of California, San Francisco.

"Nowadays you draw blood enzymes," Weiner says. "And if a person has a rise in certain enzymes that come out of the heart, we say they had a heart attack. And if there's no rise in the enzymes, we say you didn't have a heart attack."

These days, Weiner is looking for patterns in brain imaging to see if the scans can reveal PTSD or traumatic brain injury.

But the brain is vastly more complicated than the heart. And it is taking Weiner and others much longer than many might have hoped to find biomarkers for mental disorders.

Weiner shows three MRIs of three different people. One is a healthy 23-year-old man. Another is a 32-year-old man who has quite severe PTSD. The third is of an older woman with Alzheimer's disease.

Why Is Psychiatry's New Manual So Much Like The Old One?

That's true when groups of people are averaged together. But when it comes down to individuals, it's impossible to tell who's in trouble, and who's not, he says.

Despite Uneven Results, Alzheimer's Research Suggests A Path For Treatment

"Here's the hippocampus in a healthy person and here's a hippocampus in the person with PTSD," Weiner says, "and they both look pretty much the same."

Despite the difficulties, scientists are still hunting mental health biomarkers that would be clearcut and simple — similar to the kind of blood and urine tests we're all familiar with.

One multimillion-dollar effort, funded by private foundations and the U.S. military, is looking for biomarkers for PTSD and traumatic brain injury. the idea is to explore whether changes in certain brain chemicals like cortisol and norepinephrine, which have been associated with anxiety and fear, could be signals of PTSD, according to Dr. Charles Marmar, head of psychiatry at New York University Langone Medical Center, who is leading the project. "There is a biological footprint of learned fear," Marmar says. The question is, he adds, "are there downstream effects?"

If there were, it would be easier to identify soldiers with PTSD and get them treatment.

In the case of Robin Jones, he and his wife were just looking for a clearer diagnosis.

Anne Jones was the first to find out the results of her husband's Alzheimer's test. The spinal tap test came back positive for tau and amyloid proteins, both suggestive of Alzheimer's disease.

"Sad, yes, there was sadness," she says. "But there is a certain amount of relief. There's relief knowing why your arm hurts or why you have a bad cough. Knowing how to sort of chart out the rest of our time together."

The test helped the couple realize that soon he was going to need her in ways he hadn't before. They decided she should take a trip by herself, to Florence, Italy, to see the great works of art she had studied in college.

And when she came back she felt refreshed, she says, and ready for the challenges ahead.