Accessibility links
Gut Bacteria We Pick Up As Kids Stick With Us For Decades : Shots - Health News An experimental "gut check" test can tell us more about the bacteria that live inside us. By studying the way the microbial populations change over time, researchers think they may have a new tool for monitoring health. 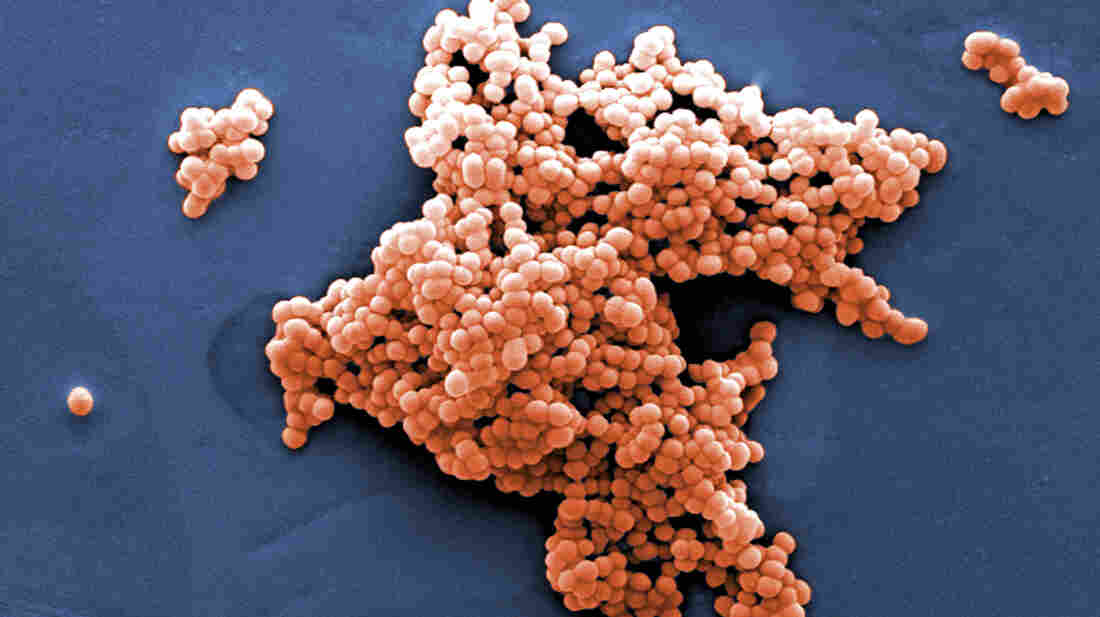 Streptococcus bacteria, like this strain, can be found in our guts. Janice Haney Carr/CDC Public Health Image Library hide caption

Most of the microbes in our guts appear to remain stable for years, perhaps even most of our lives, researchers reported Thursday.

An analysis of the bacteria in the digestive systems of 37 healthy women over a period of about five years found, for the most part, little variation over time, says molecular biologist Jeffrey Gordon of the Washington University School of Medicine, who led the research. As decades-long internal companions, Gordon says, many microbes "are in a position to shape our lives, to promote our health or, in certain circumstances, contribute to risk for disease."

Scientists have known for a long time that we all carry around bacteria that help us digest our food. But they apparently do lots of other things for us too.

"These are cells that are important parts of ourselves," Gordon says. "And they contribute to our health."

There's always been one big question about the microbes, he says: "Once these communities are formed, how long do they endure? What is the stability in healthy individuals?"

To try to get a sense of that, Gordon and his colleagues developed a new type of "gut check": a genetic analysis Gordon calls "a bar code of life." The technique involves repeatedly analyzing all the variations in a particular bacterial gene. Because each strain of bacteria carries a slightly different form of the gene, the forms act almost like name tags or "bar codes" that identify which strains are present.

The method is "a way of classifying organisms represented in an individual's gut community in a moment of time and over time," Gordon says.

Being able to test gut microbes from time to time could eventually prove to be a useful part of a checkup, Gordon says. For example, in the current study, published in this week's issue of the journal Science, Gordon and his team found that when several women lost weight, the makeup of their gut bacteria slightly shifted (though the scientists couldn't tell which came first — the weight loss, or the bacterial shift).

"By looking at someone's intestine we could pretty much tell how much weight they had lost or gained without having to put them on a scale," says Jeremiah Faith of Mount Sinai Hospital in New York, who helped conduct the study.

Another intriguing finding was that people's microbes seem to run in families — much as genes do. The researchers found more similarities in the gut microbes of related women — such as sisters, or a mother and her daughter — than among women who were not related.

"For everyone that we checked we were able to identify strains of bacteria that were shared between related individuals, which suggests that [they] had these microbes for a long time because many of these [relatives] lived far apart from each other now," Faith says.

The finding corroborates earlier work suggesting that our microbial communities tend to form early in life, largely from microbes we get from our mothers and other close relatives when we are young.

"In the same way our genome defines who we are, one could say that the microbial populations that inhabit us define who we are," says Eric Pamer of Memorial Sloan-Kettering Cancer Center in New York.

Because all the women in the study were healthy, the researchers did not examine what happens to our microbes when we do things like take antibiotics or probiotics. Stay tuned for future research.