Accessibility links
How Oregon Is Getting 'Frequent Fliers' Out Of The ER : Shots - Health News Oregon is trying to reduce health costs by encouraging people who get routine care in hospital emergency rooms to go to doctors' offices instead. Cutting out even a few hospital visits can save a lot of money. 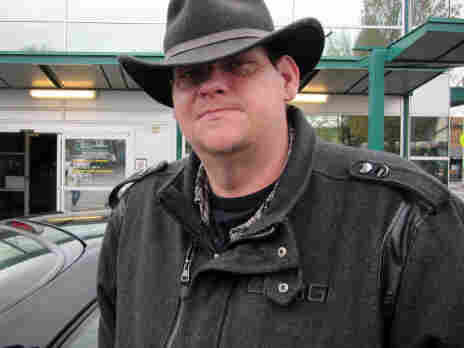 Jeremie Seals used to go to the hospital emergency room to avoid sleeping in his car. Kristian Foden-Vencil/OPB hide caption 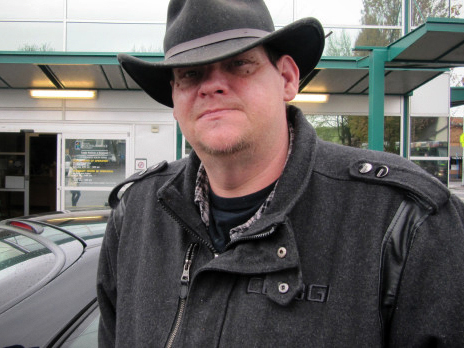 Jeremie Seals used to go to the hospital emergency room to avoid sleeping in his car.

Forty-year-old Jeremie Seals has had a tough life.

He left home at 14, and his health isn't good. He had a heart attack when he was 35. He has congestive heart failure, and nerve pain in his legs that he says is "real bad."

Seals is unwilling to divulge too much about his past. But over the years, he says his health has deteriorated to such a degree that he can no longer hold a job.

By 2011, he was sleeping in his car, and that's when his medical problems started having a big financial impact. That year, he visited the emergency room at Oregon Health & Science University in Portland 15 times and was admitted to the hospital 11 times.

"I basically lived at the emergency department," he said. "Ever since I'd had a heart attack, anytime my chest hurt, I'd either call the ambulance or go up to the hospital. And I think it was also out of desperation to just get out of my car and off the street."

His regular visits to the ER brought him to the attention of one of Oregon's new coordinated care organizations. As part of the nation's health care overhaul, Oregon has been given permission to conduct its own experiments. One way it's trying to reduce Medicaid costs is to encourage people who constantly turn up in the emergency room — so-called frequent fliers like Seals — to get their health care from regular doctors instead.

Lisa Pearlstein of Health Share of Oregon, one of the care coordinators, remembers her first meeting with Seals in 2011, when she began to guide him through the medical maze:

Seals remembers it well: "Not only did she get me boots, but she got me a pillow and she got me a really awesome sleeping bag."

Oregon's health care experiment allows Pearlstein to help Seals and other patients much as a family member might. She helped him schedule doctor appointments and went with him to make sure he understood what he had to do. She also helped him get dialysis and take his medications correctly. 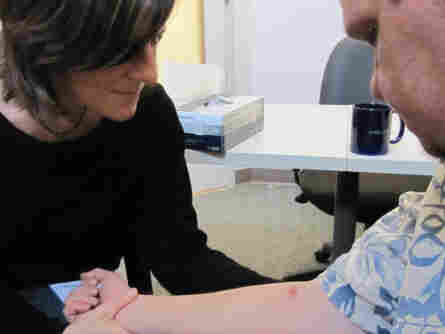 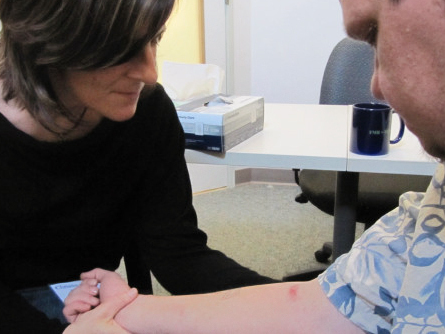 And she helped him with more everyday needs. She made sure he had passes for the local community center so he could shower. Eventually, she helped him negotiate a spot in adult foster care so he now has a roof over his head.

They built a rapport, and now he trusts her. It didn't come easily. "I understood that Lisa was trying to help me," Seals says. "But at the same time I had a real hard time trusting anybody in the medical field."

He says Pearlstein helped him to be more communicative with his doctor and helped him explain his needs calmly and clearly.

Seals' doctor, Christina Milano, says she's seen an amazing change. "When he has the resources available to him and when housing had stabilized for him, he is actually wanting to be adherent to the medication," she says.

With the intervention of Pearlstein and others, Seals' ER visits dropped from 15 in 2011 to four in 2012. His hospital stays went from 11 to four.

And that's how the state can save money, says Rebecca Ramsey of CareOregon, a nonprofit health plan for Medicare and Medicaid patients. "It doesn't take very many ED visits and it takes less than one hospital admission avoided, to actually more than pay for the time that Lisa spent with Jeremie," she says.

Oregon has no formal numbers yet, but the federal government has given the state almost $2 billion and five years to show it can reduce the rate of medical inflation by 2 percent.

This piece is part of a reporting partnership among NPR, Oregon Public Broadcasting and Kaiser Health News.