Accessibility links
Tuberculosis Outbreak Shakes Wisconsin City : Shots - Health News Officials in Sheboygan, Wis., scrambled to contain a deadly, drug-resistant form of tuberculosis. An outbreak there serves as a reminder that the contagious disease still poses a threat in the U.S. Treating just nine cases will take months and cost millions of dollars. 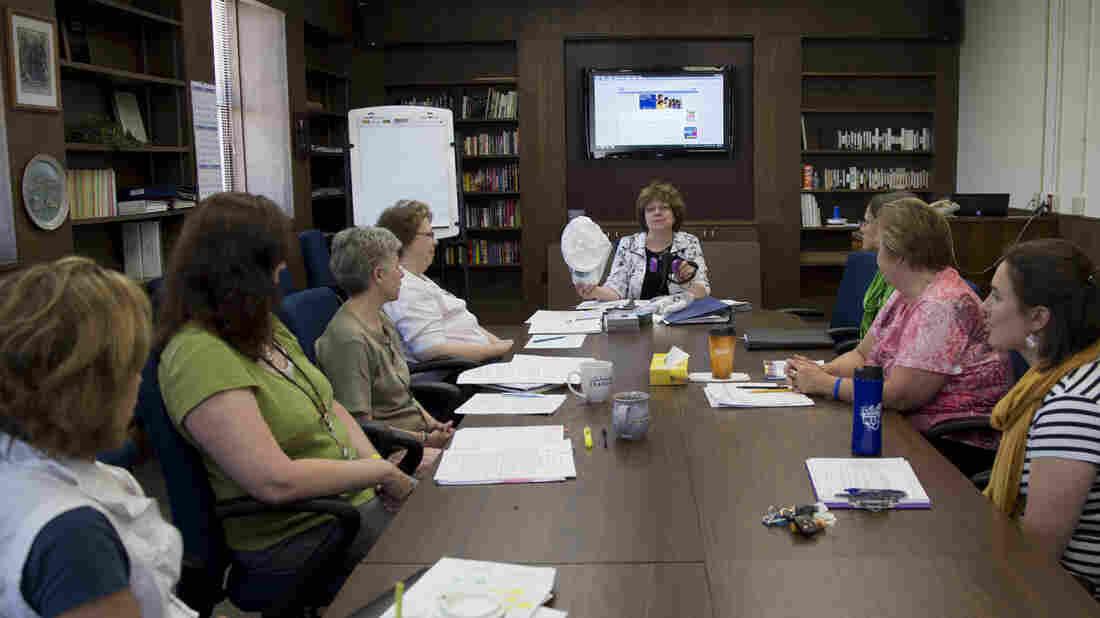 Jean Beinemann, who leads the infectious disease program in Sheboygan, explains to nurses how to protect themselves while caring for tuberculosis patients. Jeffrey Phelps/For NPR hide caption 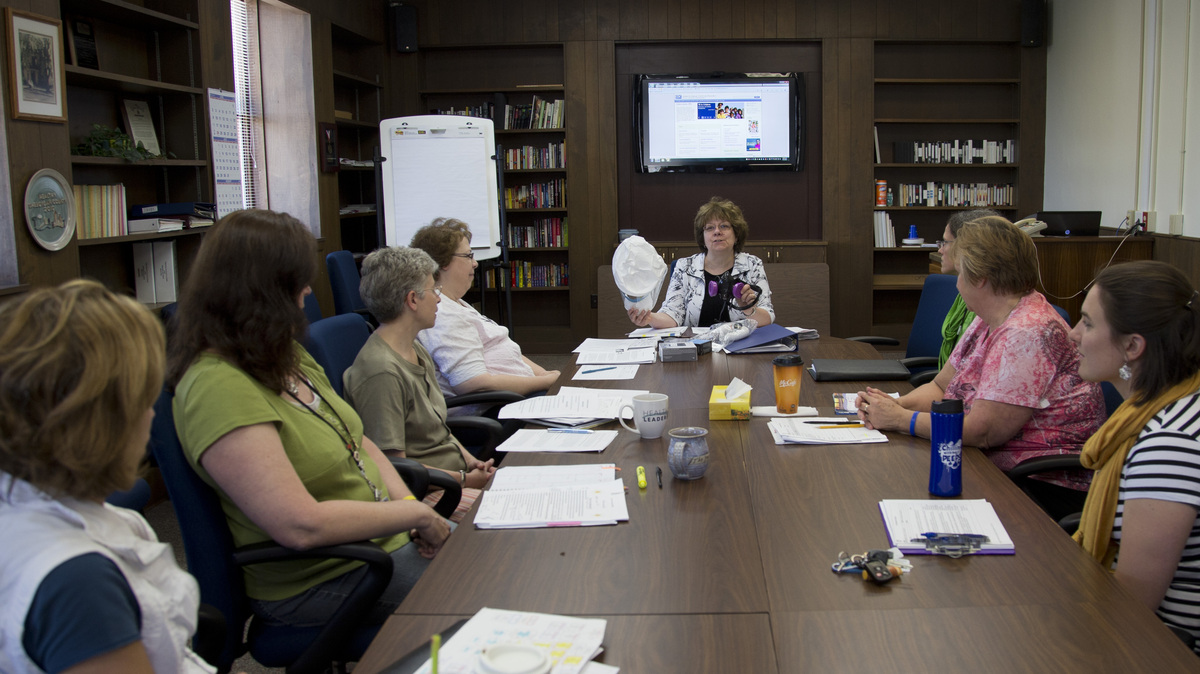 Jean Beinemann, who leads the infectious disease program in Sheboygan, explains to nurses how to protect themselves while caring for tuberculosis patients.

Looking crisp and official in his khaki-colored sheriff's department polo shirt, Steve Steinhardt says Sheboygan, Wis., is a pretty good place to be a director of emergency services.

"Nothing bad happens here," he says, knocking on wood. Unless, that is, you count the tuberculosis outbreak that struck the orderly Midwestern city of 50,000 this spring and summer.

"I never expected TB to be one of the bigger emergencies I'd face when I got into this field," Steinhardt says. 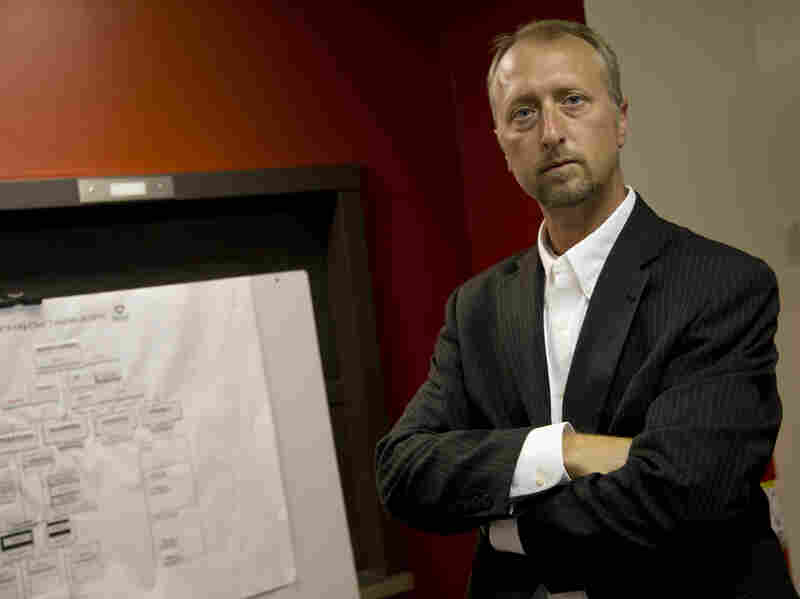 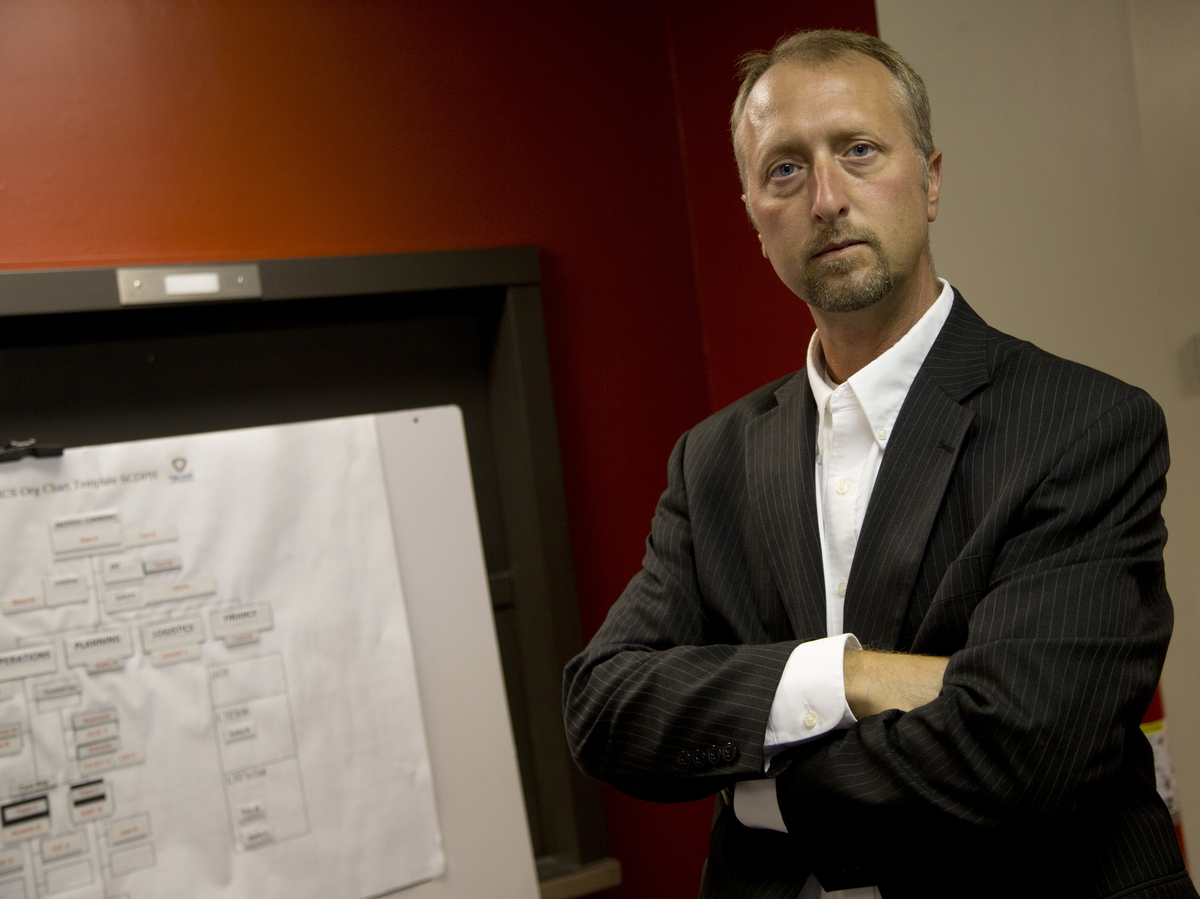 Sheboygan County officials have had to scramble to contain it. At the height of the crisis, the county activated its emergency operation center — a step usually reserved for major fires, floods and tornadoes.

The county has had to borrow personnel from other jurisdictions, calm parents of schoolchildren, find housing to isolate infected families and appeal to the state for millions of dollars in extra money to deal with the situation.

It's a reminder that TB — a disease most Americans may view as a relic of the 19th century — is still an insidious threat that can pop up anywhere.

In its advanced stages, tuberculosis can destroy lungs, damage other organs and cause death.

The Sheboygan outbreak came to light on April 11. The first case was a woman at the center of a large, close-knit family. Health officials decline to identify the family, but they say the people were part of an immigrant community, a common theme in most current TB outbreaks in the U.S.

Sheboygan is home to sizable populations from Mexico and Southeast Asia, where TB is common. Asian immigrants make up half of Wisconsin's recent TB cases. Refugees among the Hmong people of Laos and Thailand have been among the most difficult-to-treat cases.

Public health nurse Jean Beineman says the first case in the current outbreak is a middle-aged mother who had suffered from TB for many months. "[She] had symptoms since at least last August — weight loss, cough, just feeling poorly," Beinemann says.

Most states have decreased funding and staffing for tuberculosis prevention and control since 2009, the National TB Controllers Association recently reported.

Here are some highlights from its report::

By early May, Sheboygan County health workers found active TB in three other family members, spread over several households. And others had symptoms and abnormal chest X-rays.

"Once the families were identified, we knew we had a tiger by its tail," says Dale Hippensteel, Sheboygan County's public health manager.

But the really bad news was that the woman at the epidemic's center had a TB strain resistant to at least two of the main drugs used to treat the infection. That's known as multidrug-resistant tuberculosis, or MDR-TB. It's especially hard to cure. The antibiotics can cost around $300,000 for a single case.

Officials worried the MDR bacteria had spread to a lot of other people in town.

Epidemiologists predicted Sheboygan could end up with 15 symptomatic MDR-TB cases and up to 200 people infected with the resistant strain but not yet showing symptoms. Asymptomatic, or latent, TB isn't contagious. But it has to be treated with antibiotics for six months to a year.

The kids in the family with active TB infections attended a Sheboygan high school and middle school. One big priority was to see if they had transmitted the disease to their classmates.

"We tested about 130 students and teachers who had very close contacts with the affected individuals," Beinemann says. The results of a second round of testing aren't yet known.

What It Takes To Cure Drug-Resistant Tuberculosis

Treating The 'Body And Soul' In A Russian TB Prison

More than three months after the outbreak first came to light, there have been nine confirmed cases of active TB among five households. Fortunately, none of the other cases is as drug-resistant as the first one.

It's not clear yet how many other people in Sheboygan will turn out to be infected. Officials think it will be in the dozens.

That may not sound like such a big deal. But treating TB infections of any kind is complex and labor-intensive. Every day, without exception, a nurse must watch each person take medication. A lapse in treatment could cause them to develop a multidrug-resistant strain.

Active TB has to be treated until it's no longer contagious. That can take up to a year.

Officials recently moved the woman with MDR-TB into an apartment paid for by the county. Keeping her and the others apart from everyone while they're contagious requires continuous monitoring and education.

And the cost of all this is enormous. When officials feared they faced a wider epidemic of highly resistant TB, they projected it would cost the county $17 million to bring it under control.

In the end, Sheboygan dodged that worst-case scenario. But it had to persuade the governor and state legislature to appropriate around $5 million to deal with the situation. 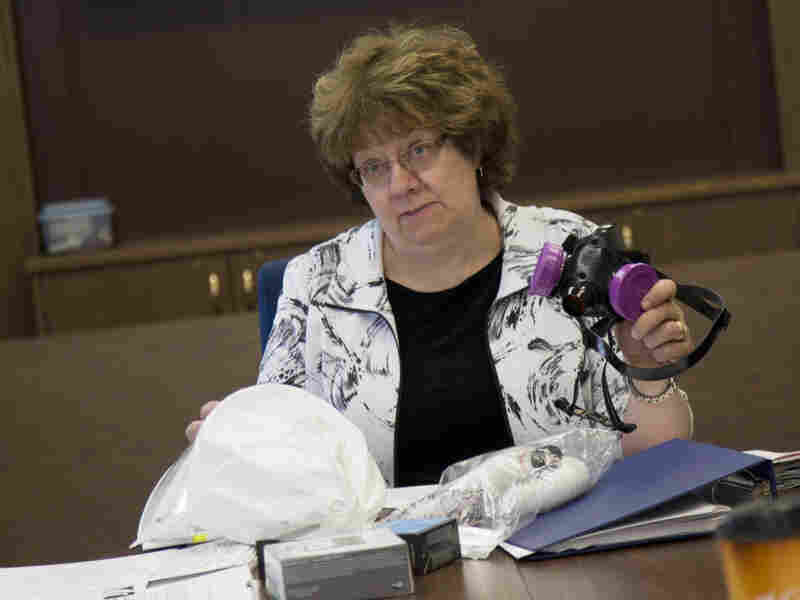 Nurse Jean Beinemann says it's not unusual for doctors to miss tuberculosis because the contagious disease is uncommon in Wisconsin. Jeffrey Phelps/For NPR hide caption 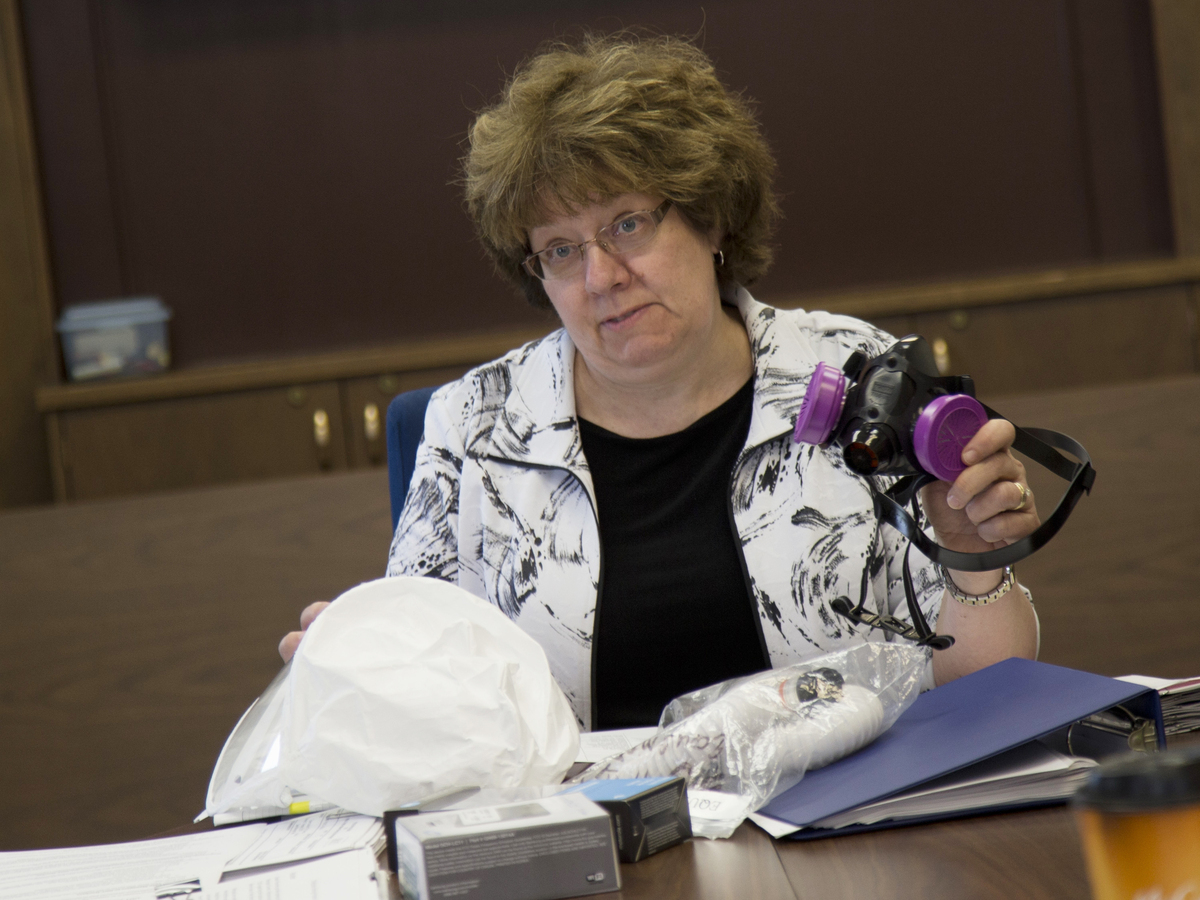 Nurse Jean Beinemann says it's not unusual for doctors to miss tuberculosis because the contagious disease is uncommon in Wisconsin.

Still, Lorna Will, Wisconsin's TB control director, says Sheboygan has avoided a much higher number of TB infections than it might have had. "That's because we jumped on them and got them right away," she says.

But across the nation, the ability to jump on these outbreaks is eroding fast.

TB in the U.S. is at an all-time low, with less than 10,000 cases each year. But a recent survey by the National TB Controllers Association shows 60 percent of states have cut their TB control budgets. Many health workers say cases of TB are being missed and they can't investigate outbreaks the way they used to.

This reminds Dr. Richard Chaisson of what happened in the early 1990s. Funding cuts in TB programs led to a resurgence of the disease.

"We corrected that mistake, and we've had great results,"says Chaisson, who directs TB research at Johns Hopkins University. "Now we're making that same mistake all over again, which is declaring victory and withdrawing from the fight before the disease is controlled."

"Overall TB rates won't go back to the 1992 level, Chaisson says. "But outbreaks like Sheboygan's will start popping up more often ... and stopping them will cost a lot more than keeping TB under control."