Accessibility links
TVs Pose A Danger To Kids, But Not The Way You Might Think : Shots - Health News Every 30 minutes a child ends up in the emergency room after being injured by a television. Flat screen TVs aren't necessarily safer, according to a study. They are heavy and perhaps even more likely to tip over than those old tube monsters. Experts say TVs need to be tethered to a wall.

TVs Pose A Danger To Kids, But Not The Way You Might Think

TVs Pose A Danger To Kids, But Not The Way You Might Think 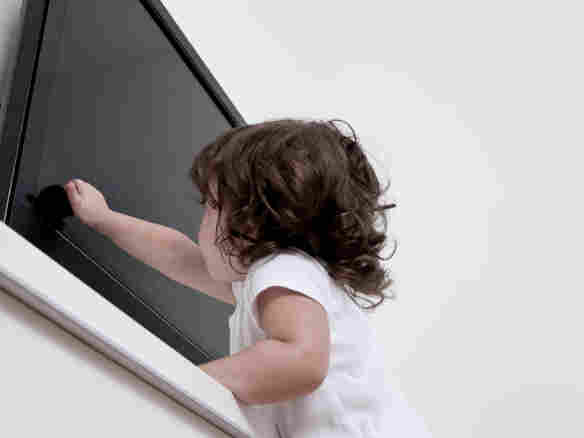 That flat screen can still be dangerous if it falls off the wall. iStockphoto.com hide caption 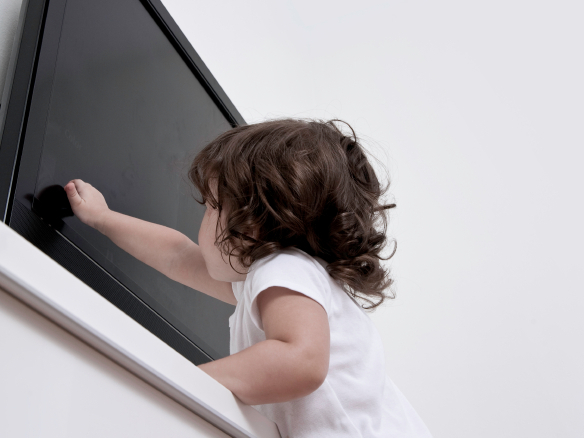 That flat screen can still be dangerous if it falls off the wall.

Television poses a threat to children, and we're not talking the programs. We're talking a large household appliance that can hurt kids.

About every 30 minutes a child ends up in the emergency room with injuries caused by a television, a study finds, most often because the TV falls on a young child.

"We live in a world that is designed by adults, for the convenience of adults," says Dr. Gary Smith, senior author of the study and director of the Center for Injury Research and Policy at Nationwide Children's Hospital in Columbus, Ohio. "A TV is wonderful entertainment for everyone in the family, but it is a potential source of danger to a young child."

Smith and his colleagues looked at data from the National Electronic Injury Surveillance System, a federal database that tracks emergency room visits caused by consumer products.

Heads and necks were most commonly hurt. Most of the injuries were cuts and bruises, but 13 percent of the victims under age 5 got a concussion. The results were reported in the journal Pediatrics.

When we here at Shots looked at the dates on the data, our first question was, "What about flat screens?" Those TVs have all but replaced the heavy tube goliaths of yore; surely these sleeker models would prove safer. So we asked Smith.

"There is a myth that as flat screens were introduced in the marketplace, we would see a decrease in the number of TV-tip over related injuries to young children," Smith said. "This study shows the opposite is true."

The data don't show what type of TV was involved. But during the study period, the number of injuries caused by tip overs almost doubled, while the hit-the-TV injuries declined. Smith thinks that one reason is that as flat screens entered the home, the older tube TVs were moved to bureaus, bookshelves and other pieces of furniture where they pose a risk to active, inquisitive youngsters.

Another problem could be that flat screens tend to carry their weight to the front of the screen, making it more likely the TV will tip forward, the study says.

"Any TV that goes in the home needs to be attached to a wall," Smith says, "regardless of whether it is a flat-screen or a CRT."

Large pieces of furniture are supposed to be tethered to the wall with safety straps so that a young child bent on using a bookcase as a climbing wall won't be crushed by falling furniture. But there are no requirements for tethers on televisions.

Parents and caregivers can use furniture tethers or brackets to anchor televisions, according to the Consumer Product Safety Commission. TVs should also be on low, sturdy bases, the commission says. Or mount that flat screen high on the wall, well out of reach of curious climbers.