Accessibility links
Female Genital Mutilation On The Decline, But Still Too Common : Shots - Health News The most comprehensive survey on female genital mutilation and cutting finds the practice has decreased in more than half of the countries where it persists. But in parts of eastern Africa, about 90 percent of girls still undergo the abusive procedure. 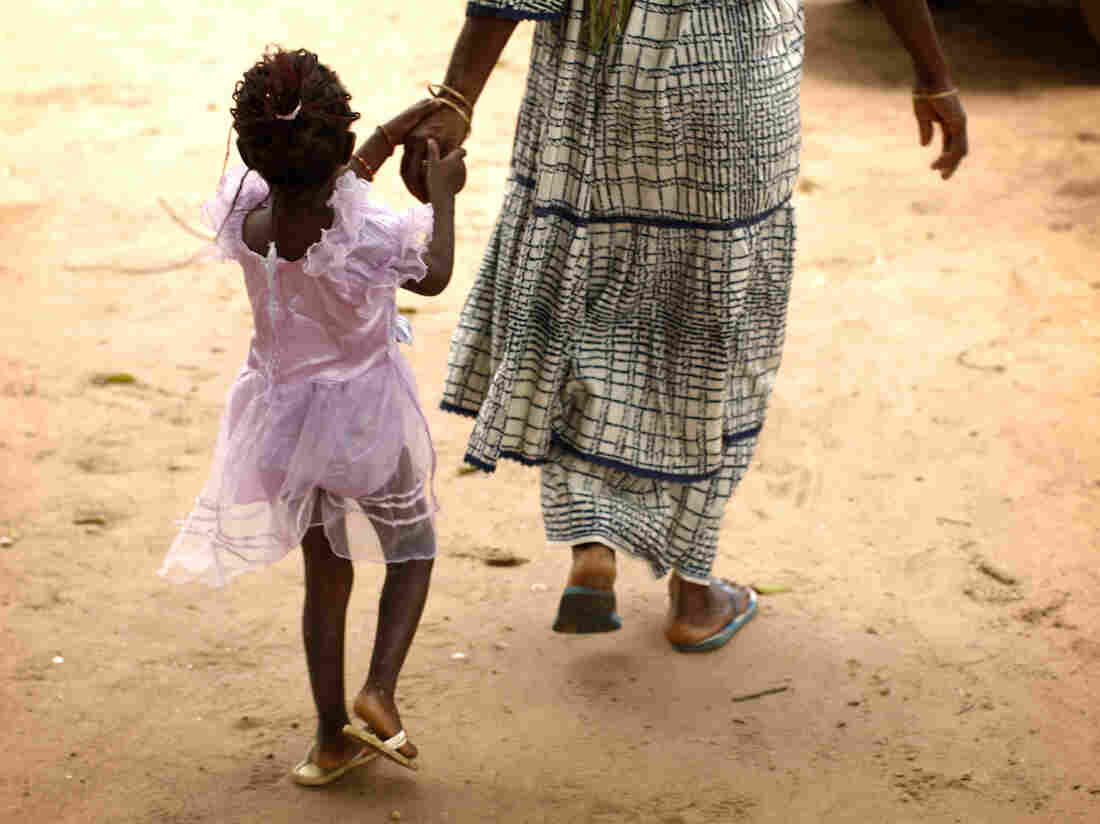 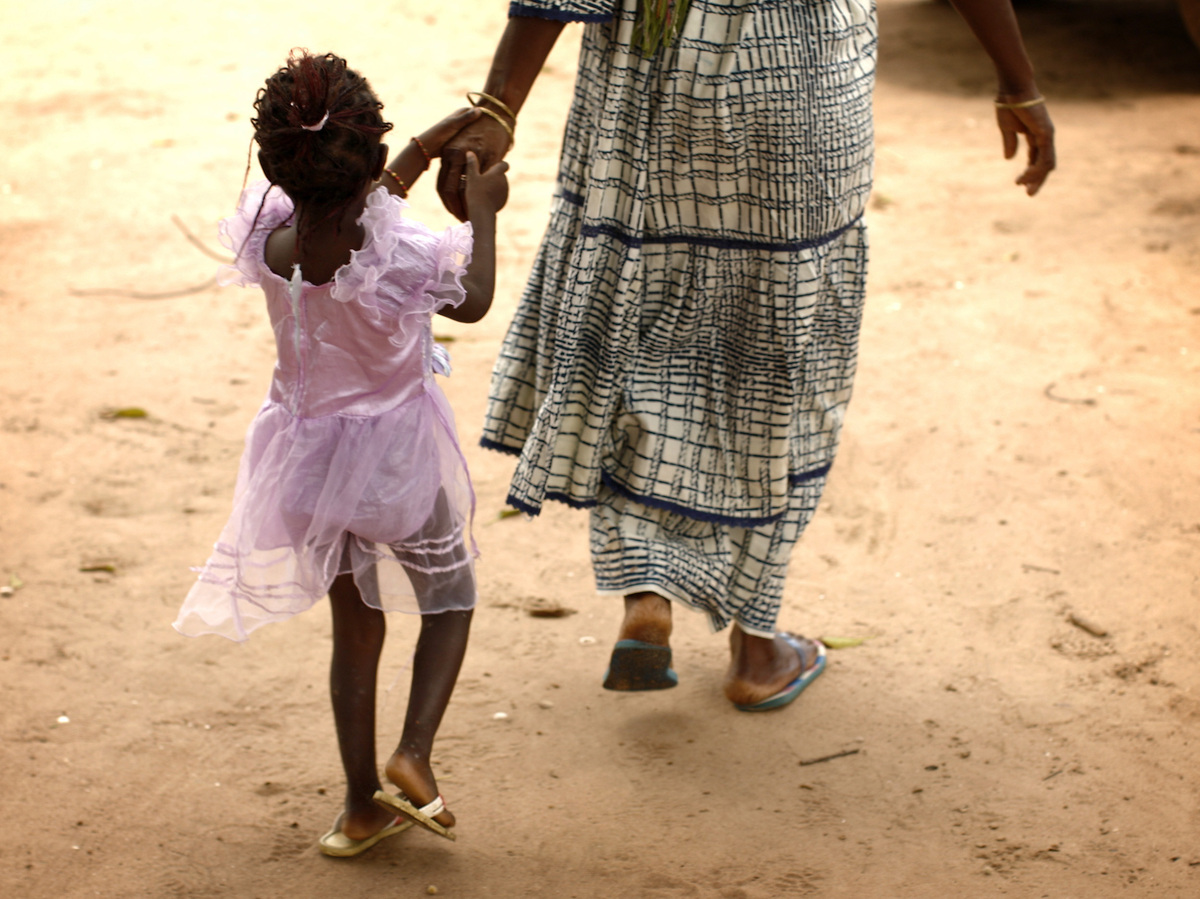 A mother and daughter walk home after attending a community meeting about eradicating female genital mutilation in the western Senegalese village of Diabougo.

More than 125 million women and girls in Africa and the Middle East have suffered from genital cutting and other types of mutilation, UNICEF said this week in the most comprehensive and quantitative survey to date. Nearly half of those women live in Egypt and Ethiopia, where the practice is still entrenched in the culture.

"It's seen as tradition — something that has just always been there," UNICEF's Francesca Moneti said. "It's just like how we get up in the morning and get dressed. Your daughter reaches the age of cutting, and she just gets cut."

UNICEF and other health organizations around the world have condemned female genital mutilation, which usually involves removing a piece of flesh. The groups have been working for decades to curtail the practice. 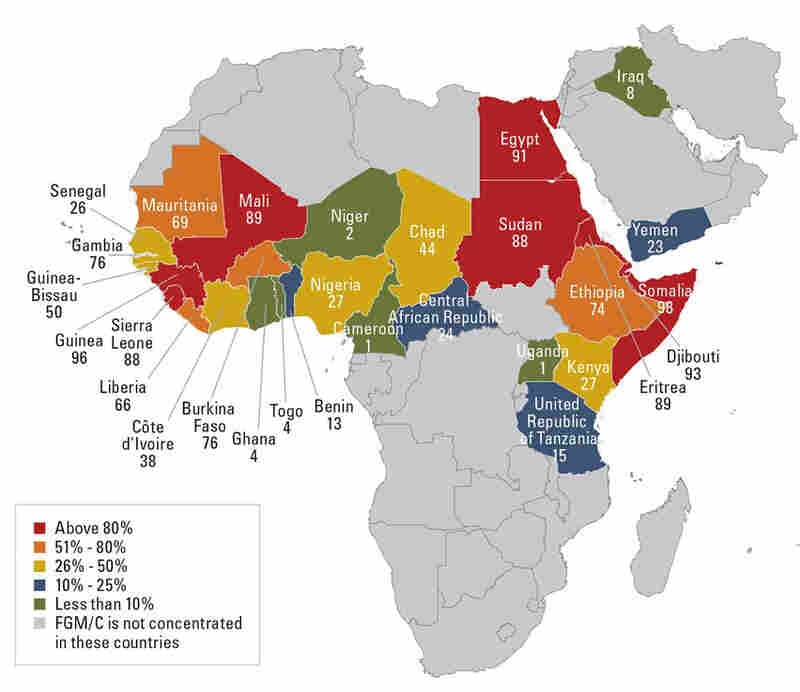 Female genital mutilation occurs primarily in 29 countries in Africa and the Middle East. Courtesy of the UNICEF hide caption

toggle caption
Courtesy of the UNICEF 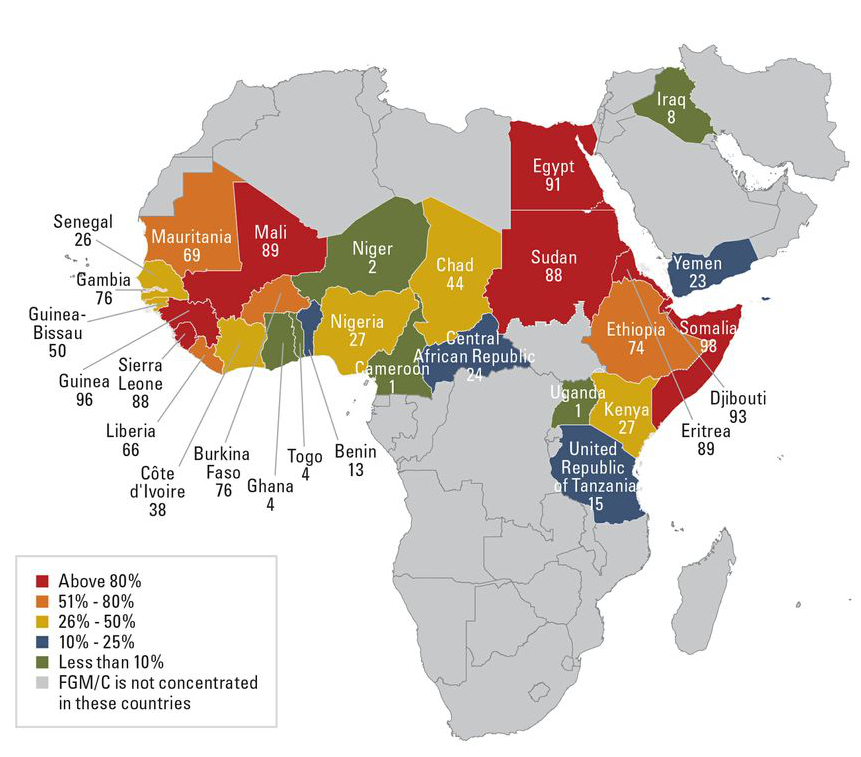 Female genital mutilation occurs primarily in 29 countries in Africa and the Middle East.

Courtesy of the UNICEF

The new report offers evidence that some progress has been made. A girl's risk of being cut has declined over the past 30 years in more than half of the countries where genital mutilation is concentrated.

And in some places, that decline is substantial. A girl in Kenya or Tanzania today is three times less likely to have suffered the abuse than her mother. In Iraq and Nigeria, the risk has dropped by nearly half.

Still, even in these countries, Moneti says, attitudes toward the practice are noticeably shifting. "We see from the data, that the level of support from girls 15 to 19 is lower than with older women." In Egypt, for instance, two-thirds of older women support the practice, but just one-third of teenage girls do.

The presumption has been that men often condone female mutilation, she says. "But when we look at the data, it doesn't support that." Many men and boys want the practice to stop, too.

The problem, Moneti says, is that communities – even couples — don't talk about the issue. The desire to end the practice is hidden, she says. "Men often don't know what women think and vice versa."

In most places, the cutting is performed at home with a razor blade. But in Egypt, trained doctors perform more than 75 percent of the procedures. About 20 percent of women across all 29 countries surveyed have undergone an extreme procedure, in which the genitals are cut and then the vagina sewn closed.

Some people mistakenly frame mutilation as an Islamic practice, says UNICEF Deputy Executive Director, Geeta Rao Gupta. "But it's not," she says. "There are many Islamic communities that don't practice it. It's not written anywhere in the Bible or the Quran."

Instead, the practice is linked to poverty and lack of education, the report finds. And a girl is much more likely to be cut if her mother was.

"Eliminating female genital mutilation and cutting is essential," Gupta says. "It's a form of controlling girls' and women's sexuality. It's a form of violence against girls. These are the kinds of practices that must end."