Accessibility links
Menthol: Great In Aftershave, Not So Much In Cigarettes : Shots - Health News The Food and Drug Administration is edging closer to regulating menthol in cigarettes. A new FDA report says though the menthol itself isn't toxic, it can make it more likely that people will start smoking, and make it harder to quit.

Menthol: Great In Aftershave, Not So Much In Cigarettes

Menthol: Great In Aftershave, Not So Much In Cigarettes 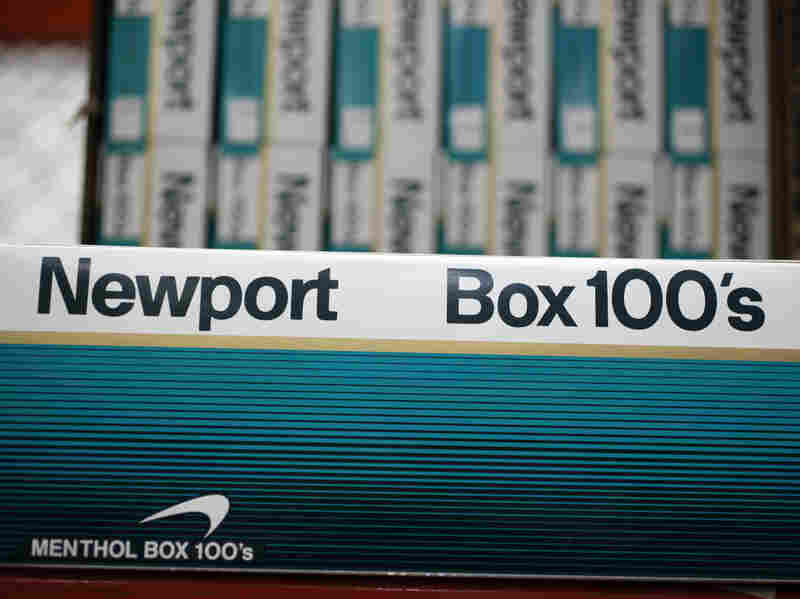 Newport is the most popular menthol cigarette in the United States. Sales of menthols has increased though cigarette sales are declining overall. Paul Sakuma/Associated Press hide caption

Menthol gives cough drops, lip balm and other drugstore remedies that cool minty taste and slight numbing quality. Now the Food and Drug Administration has taken a long-awaited step toward saying that in cigarettes, those same qualities do more harm than good.

Yesterday the FDA announced an advanced notice of proposed rulemaking, which is bureaucrat-speak to signal that after years of argument between public health advocates and the tobacco industry, the federal health agency is edging closer to regulating menthol in cigarettes.

More than one-third of all cigarettes sold in the United States are menthols, and 40 percent of new smokers pick menthols.

That is because menthol masks the harshness of tobacco smoke, and makes it easier for people to start smoking and get hooked, anti-tobacco advocates say. "The menthol anesthetizes the throat and changes the unpleasantness of the tobacco smoke," David Abrams, executive director of the Schroeder Institute for Tobacco Research and Policy Studies at Legacy, an advocacy group, tells Shots. "It's smooth, it's cool. It just makes it more pleasant, especially for the first cigarette."

But the tobacco industry begs to differ. Companies like Lorillard Inc., which makes Newport, the nation's most popular menthol smoke, say that menthol is just flavoring, and that menthol cigarettes shouldn't be regulated differently than any others.

An independent scientific review released by the FDA yesterday sides with the menthol-as-gateway-drug faction.

The reviewers found that menthol cigarettes are no more toxic than non-menthols. But they also found that menthol is associated with more smoking among young people, and "is likely associated with greater addiction. Menthol smokers show greater signs of nicotine dependence and are less likely to successfully quit smoking." Thus, the FDA concludes, there is "likely a public health impact of menthol in cigarettes."

This pretty much repeats the findings of a 2011 independent scientific review. Back then, the industry argued that there was no scientific evidence that menthol cigarettes have more impact on public health. The FDA advisory report disputes that, though gently.

The question of menthol in cigarettes was being argued long before then, too. But only since 2009, when Congress gave the FDA the authority to regulate cigarettes, has there been the possibility of some sort of federal restriction.

Menthol has been used as a remedy for centuries because it triggers cold sensors in the skin, giving a sensation of coolness even though there's no change in temperature. That's why it's in sunburn gels, analgesic rubs like IcyHot, and decongestants like VapoRub and Mentholatum.

The chemical was originally derived from mint, and is now made synthetically to meet global demand.

One issue sure to come up is how a ban or restrictions would affect African-Americans. They are far more likely to smoke menthols than other types of cigarettes. Nearly three-quarters of African American smokers choose menthols, as do 30 percent of Latino smokers. But only about 20 percent of white non-Latinos smoke menthols.

The FDA review says that marketing targeted at those communities could explain the difference, but the agency also says it plans to study research to see if there are genetic differences that could explain that preference.

Public health advocates say banning menthol would help reduce the rate of illness and premature death in minority communities already dealing with disproportionate health burdens. But Lorillard's "Understanding Menthol" website casts menthol as a freedom of choice issue, saying that "Americans have a right to make a personal choice to use any legal product."