Accessibility links
Hating On Fat People Just Makes Them Fatter : Shots - Health News Some people rationalize that it's all right to shame or blame someone who's overweight because it will motivate the victim to lose pounds. News for the slim and smug: It doesn't work, and it's not OK. 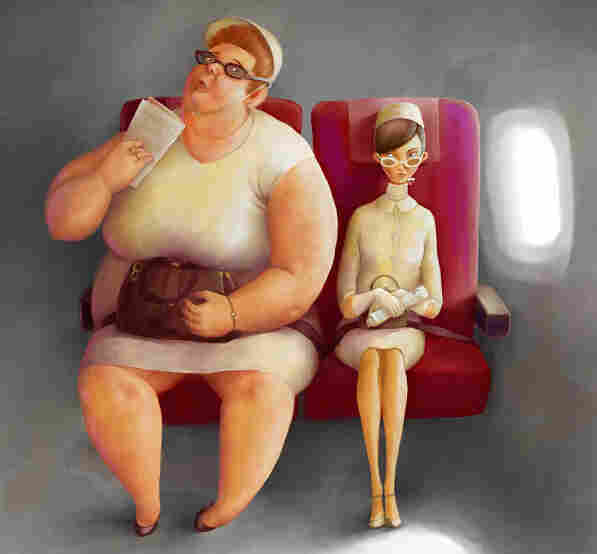 The roots of obesity are complex and include genetics and other factors beyond individual choice, research shows. iStockphoto.com hide caption

Don't try to pretend your gibes and judgments of the overweight people in your life are for their own good. Florida researchers have evidence that discriminating against fat people only makes them fatter.

"People often rationalize that it's OK to discriminate based on weight because it will motivate the victim to lose pounds," Angelina Sutin, a psychologist at the Florida State College of Medicine in Tallahassee, tells Shots. "But our findings suggest the opposite."

Sutin and a colleague checked survey data from more than 6,000 American men and women age 50 and older who were asked how often in their daily lives they experienced different types of discrimination. Examples ranged from discourtesy or refusal of restaurant service to not getting a job or promotion.

The survey then asked the respondents why they thought the discrimination happened. Was it because of their race or age, for example, or their sex, age or weight? Researchers also measured the participants' weight and height.

Four years later, a follow-up survey asked the same questions and checked for changes in weight.

Overweight people who said they'd experienced discrimination based on weight were more than twice as likely to be obese four years later than people who didn't mention such discrimination. And those who started out obese were three times more likely to remain so if they'd been harshly targeted because of their weight. Other types of discrimination showed no effect on weight.

Sutin's study, published in the latest issue of the online journal PLOS One, wasn't designed to get at why weight discrimination led many fat people to pack on even more pounds. But other research suggests that increased rates of depression, emotional eating and low-self esteem likely play a role. So does increased stress (and the associated hormonal surges that can trigger even more hunger and eating), as well as the avoidance of exercise.

"If someone's mean to you at the gym because of your weight or acts like you don't belong there," Sutin says, "you're less likely to go back."

The roots of obesity are complex and include genetics and other factors that go well beyond individual choice. "Trying to promote healthy behaviors is a good thing," she says, but shaming someone has no place in the solution.

Unfortunately, weight-related prejudice and discrimination persists in many spheres and is only increasing among employers, teachers — and doctors.