Accessibility links
Boys With Autism Or ADHD More Prone To Overuse Video Games : Shots - Health News Boys with autism spectrum disorders or ADHD put in twice as much time each day playing video games as do typically developing boys. But researchers say they don't know if the games contribute to behavior issues or if the children's difficulties make video games more alluring. 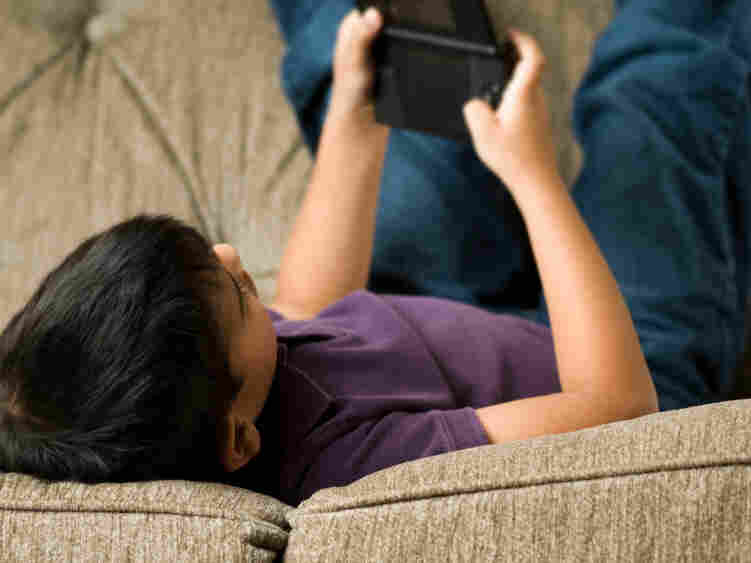 The American Academy of Pediatrics recommends that children have no more than two hours a day of "screen time." Marilyn Nieves/iStockphoto.com hide caption

Video games can be a haven from the world, and it's easy to imagine that they would appeal to children who struggle with social interaction.

Boys with autism spectrum disorders or with ADHD are both prone to problematic use of video games, according to a study.

The researchers asked the parents of boys ages 8 to 18 to report on their child's video game use, including hours of use and the types of games they play.

Earlier studies of children with ADHD or autism also have found increased use of video games, but this is the first study to compare the two with typically developing children.

The boys with ADHD or autism also scored higher on a test intended to measure dependence on video games. The more inattentive symptoms they had, the more likely they were to score higher for problematic video game use. The study authors speculate that because children with autism often have restricted interests and preoccupations, they may be more likely to become overly dependent on video games.

Put that all together, and it's enough to lead a parent to think that video games could be linked to some of the difficulties experienced by children with these disorders.

But the researchers, at the University of Missouri's Thompson Center for Autism and Neurodevelopmental Disorders, say it's impossible to say from their study if the video games are causing problems or if children with problems are more likely to be drawn to the games.

"Longitudinal studies are needed to extend this research and to examine the long-term effects of screen-based media use in children with [autism spectrum disorder]," the researchers wrote. Their study was published in the journal Pediatrics.

Until then, there needs to be more awareness of potential risks of video game use, the authors write, particularly in clinical care settings for children with autism or ADHD.

One of the more intriguing nuggets from this study is the game preferences of the three groups of boys.

The typically developing boys were big into first-person shooter and sports games. But the boys with autism or ADHD were more likely to choose action games or role-playing games. "First-person shooter games are fast-paced, audiovisually intense, and violent, and game play often results in increased physiologic arousal," the authors write.

That, they speculate, is more than many children with autism spectrum disorders or ADHD can handle.