Accessibility links
Canvassers For Health Coverage Find Few Takers In Boca Raton : Shots - Health News Most Americans aren't aware that they may be able to buy health insurance under the new marketplaces. So an outreach effort lead by veterans of the Obama administration and campaigns is going door to door to get the word out. 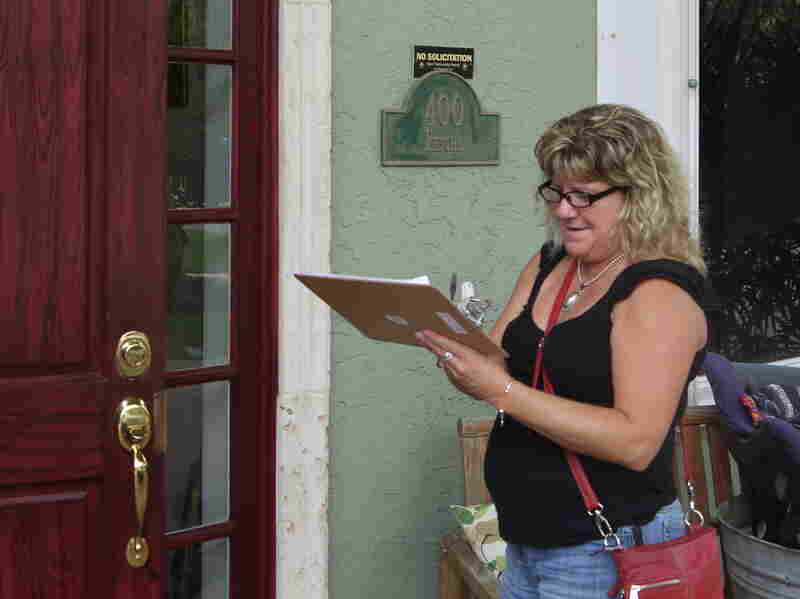 Tammy Spencer did a double take when she read the address on her paper and looked at the house in front of her.

Spencer, a volunteer with the nonprofit Enroll America, was spending a hot and humid Saturday morning knocking on doors in Boca Raton, a mostly posh South Florida city, looking for people without health coverage. She wanted to let them know about new online insurance marketplaces that open for enrollment Oct. 1.

The spacious house was on the Intracoastal Waterway, complete with its own boat dock. The woman who answered the door said she already had coverage through Medicare, and Spencer went on to the next house.

After two hours of canvassing, she found one uninsured woman and got contacts for three others. "It was worth it," said the 51-year-old insurance agent. "But next time, we need to go to a poorer area, or set up a table in the mall."

Spencer is one of hundreds of volunteers for Enroll America's "Get Covered America" campaign, which canvassed neighborhoods across Florida, New Jersey, Ohio and several other states Saturday to kick off several months of outreach efforts.

Enroll America is led by veterans of the Obama White House and Obama's presidential campaigns and is using campaign-style techniques to locate the uninsured. Funders include Families USA, a consumer advocacy organization that pushed for the health law. Health and Human Services Secretary Kathleen Sebelius has tried to raise money for Enroll America, though those efforts have sparked criticism from Republicans in Congress.

Most people are unaware of the marketplaces, surveys show. They will offer coverage to individuals and small employers and offer government subsidies to anyone making less than 400 percent of the federal poverty level, or $94,000 for a family of four.

Many people are also unaware that insurers will no longer be able to deny coverage for pre-existing conditions, or charge higher rates to people based on their health status. The Obama administration hopes to get 7 million people enrolled in the first year of open enrollment which ends in March.

Leaders of Enroll America say its volunteers aren't knocking on doors randomly but are relying on Census data and information from telephone surveys to pinpoint neighborhoods and houses where people are mostly likely to be uninsured. But the canvassing in Boca Raton showed how challenging the work can be.

Florida is one of the target states for Enroll America because it has nearly four million uninsured residents. It is relying on the federal government to run its Obamacare marketplace, and as a result has limited federal dollars for outreach efforts.

"We've been building our efforts on the ground in Florida to engage folks in their homes and communities," said Nick Duran, who directs Enroll America's operations in Florida. He said the group, which has 27 paid staff in the state, already has hundreds of volunteers and hopes to recruit a few thousand more in coming months.

He said he does not have a target for how many Floridians he hopes to enroll.

Florence French, field organizer for Palm Beach County, said Boca was on the list because it has uninsured residents, as well as a volunteer network willing to help.

One of them was Mark Powell, 56, who works the deli counter at a Publix grocery store, and says he does not have insurance because he can't afford his company's plan. He learned about Enroll America when he searched for information about the law and he thought their campaign could help him and others.

"People can see that I am sincere about this when I talk to them," Powell said.

Also canvassing was Yves Laplanche, 62, an engineer who had worked as a volunteer for both of President Obama's election campaigns. He said he remembers how years ago his mother struggled without health insurance. He wanted to tell people about a law that might help them if they signed up for coverage.

Laplanche and other volunteers were given a sample script to approach people, explaining what Enroll America is and that they are not selling anything. They were instructed to avoid talking about Medicaid, the state-federal health program for the poor, which is not being expanded in Florida next year under the health law because state lawmakers did not approve it.

"Don't get into any political conversations," French told the nine volunteers who met outside the city's new library.

Jennifer Depaz, 25, was one of those who came to the door and was willing to engage volunteers in conversation.

"Health care is so expensive here I had to go back to Guatemala to have my wisdom teeth out," said Depaz, who works at a nearby ice cream shop and has no insurance.

Spencer took down her information and left her an Enroll America brochure.