Accessibility links
Doctors Increasingly Ignore Evidence In Treating Back Pain : Shots - Health News Some ibuprofen and maybe some physical therapy are all it takes to make most back pain go away. But a study finds that doctors and patients are increasingly turning to fancy scans and opioid painkillers. They typically don't help, and increase the risk of addiction and overdose. 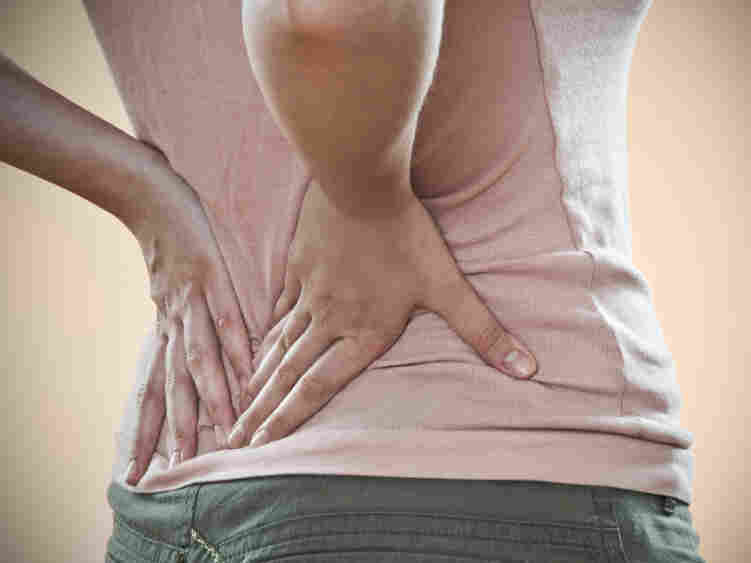 The misery of low back pain often drives people to the doctor to seek relief. But doctors are doing a pretty miserable job of treating back pain, a study finds.

Physicians are increasingly prescribing expensive scans, narcotic painkillers and other treatments that don't help in most cases, and can make things a lot worse. Since 1 in 10 of all primary care visits are for low back pain, this is no small matter.

What does help? Some ibuprofen or other over-the-counter painkiller, and maybe some physical therapy. That's the evidence-based protocol. With that regimen, most people's back pain goes away within three months.

But when researchers at Beth Israel Deaconess Medical Center in Boston looked at records of 23,918 doctor visits for simple back pain between 1999 and 2010, they found that doctors have actually been getting worse at prescribing scientifically based treatments.

Doctors were recommending NSAID pain relievers and acetaminophen less often. Instead, they were increasingly prescribing prescription opioids like OxyContin, with use rising from 19 percent of cases to 29 percent. Over-the-counter painkiller use declined from 37 percent to 25 percent. Other studies have found that opioids help only slightly with acute back pain and are worthless for treating chronic back pain.

"That's a big public health issue," says Dr. John Mafi, chief medical resident and a fellow at Beth Israel Deaconess. Mafi was the lead author of the study, which was published online in JAMA Internal Medicine. In the 1990s doctors were criticized for ignoring patients' pain, Mafi says. Some of that criticism was valid, but doctors have overreacted. "What magic bullet better than a very powerful pain medication?"

About 43 percent of patients taking opioids for chronic back pain also had other substance abuse disorders, the researchers found. In 2008, almost 15,000 people died from overdoses of prescription opioids, and abuse has surged among women. Opioids may be necessary in some cases, Mafi says, but "they're certainly not first-line."

Doctors were also quick to whip out the prescription pad and call for CT and MRI scans for people with lower back pain, the study found. The number of people getting scans rose from 7 to 11 percent. Though those scans won't hurt the patient, in most cases they don't find anything wrong. And they are expensive, costing $1,000 or more.

Patients are partly to blame for the rush to scan, Mafi says. "Patients are expecting very comprehensive evaluations," he tells Shots. "There's a sentiment perhaps if my doctor ordered an MRI for my back pain they really listened to me. It's almost validating."

And in an era when doctors are rated online by patients, "doctors have an incentive to make patients happy," Mafi says.

Financial incentives for doctors may also be a factor. This study didn't examine why doctors aren't following clinical guidelines for treating back pain, but other studies have found that when doctors own imaging equipment, they are more likely to use it.

Doctors should be cut a little slack, a journal commentary accompanying this study says, because guidelines have been conflicted on back pain treatment until recently, and it takes 17 years, on average, for new treatment standards to be widely adopted. But creating checklist-type guidelines for doctors would help speed that process, the commentary says. So would requiring patients to pay more of the cost of expensive imaging, and providing payment incentives for doctors who do the right thing.

"For the majority of new-onset back pain [cases], it gets better within three months," Mafi says. "Unfortunately, we don't have fancy treatments that cure it." Time, some ibuprofen and gentle exercise aren't sexy. But they most often do the trick.