Accessibility links
Parents Grapple With Explaining Cancer To Children : Shots - Health News When a parent finds out he or she has cancer, one of the most difficult conversations to have may be with the children. Two programs in Houston teach children and parents how to deal with the emotions that arise throughout the diagnosis and treatment of cancer. 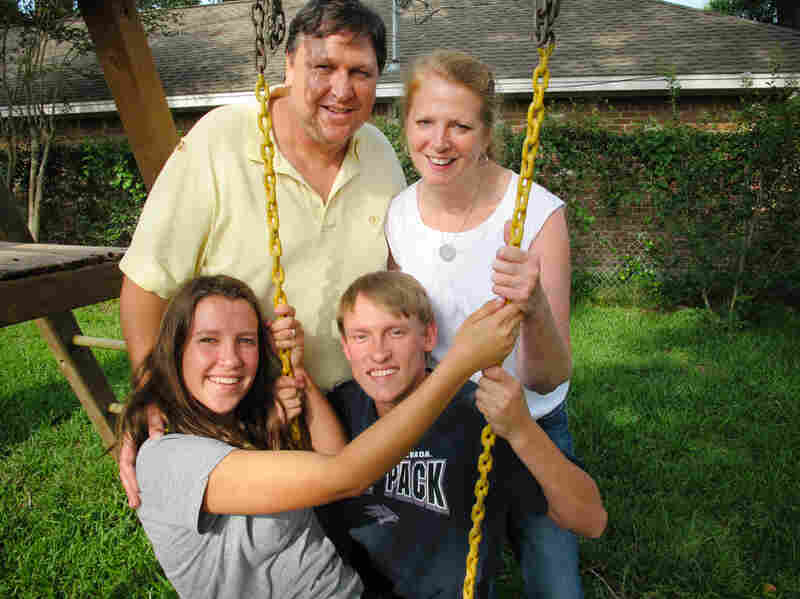 Julie Goodman says it's important to have family conversations about her cancer diagnosis and treatment. Here she stands with her children, Lena and Jack, and husband John. Carrie Feibel/KUHF hide caption 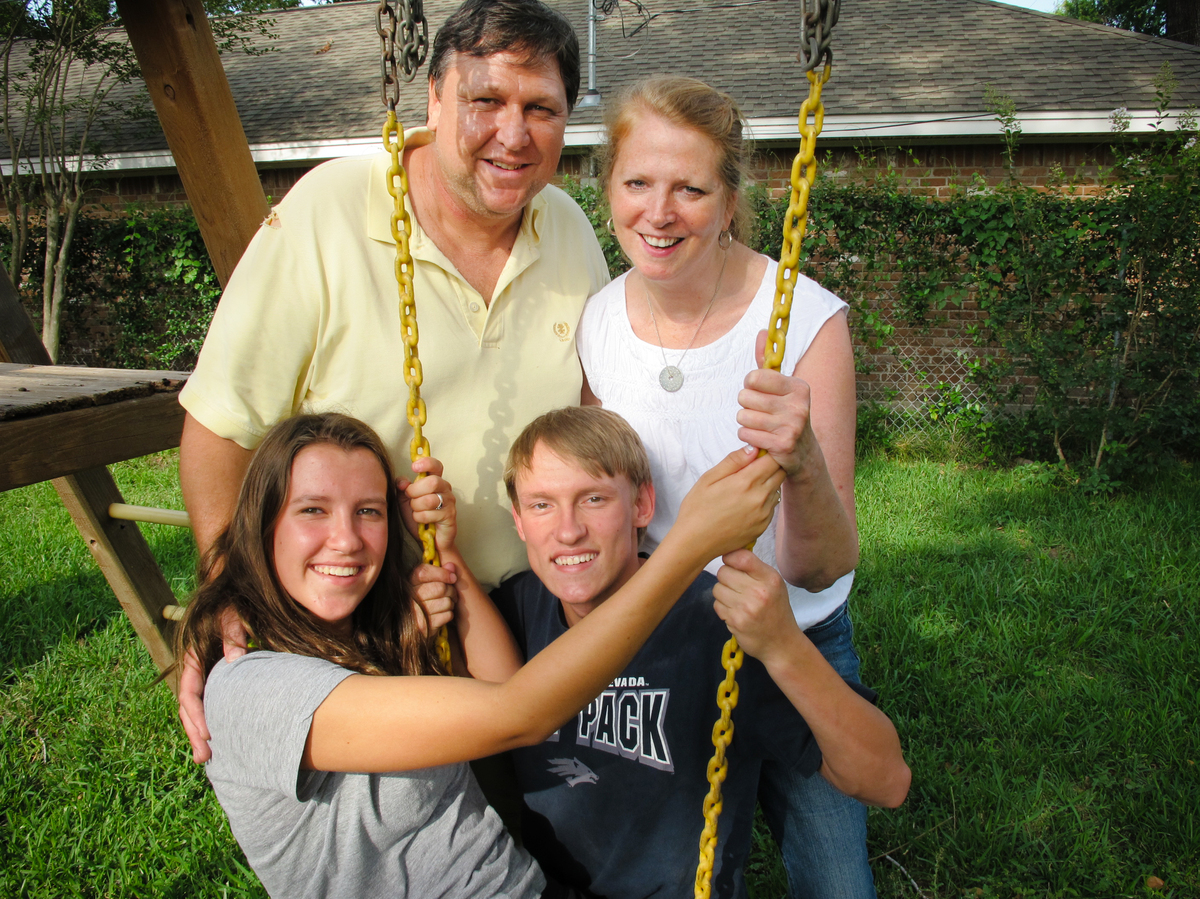 Julie Goodman says it's important to have family conversations about her cancer diagnosis and treatment. Here she stands with her children, Lena and Jack, and husband John.

Jack Goodman remembers the day his mother, Julie, told the family she had colorectal cancer. He was in seventh grade.

"They just sat us down on the futon in the living room, or the couch that we had, and told us," Jack says. "But I didn't worry because I give it up to God."

His younger sister, Lena, was in fourth grade. She wasn't so easily comforted.

"I was worried. Like she was going to like, maybe die from it, because it's happened to a few people that we know."

Julie Goodman reflects on how hard it was to tell them.

"One of the most difficult parts is what I'm diagnosed with," she says, "Breast cancer gets all the attention because it's a little more glamorous than, you know, the colon." It was 2009; Julie Goodman was 43. "So then you have to talk about what that means and where it is, and you know that explanation was grody enough for them that they didn't ask a lot of questions about that either."

Good communication can ease children's fears and isolation when a parent has cancer, studies say, even up to the point of a parent's death.

Still, figuring out what to tell the kids — and when — is hard, and many parents who have cancer get little to no advice from their doctors about how to handle it.

Two hospitals in Houston, where the Goodmans live, are tackling the issue with support groups so that other parents in their situation won't have to struggle to know what to say. 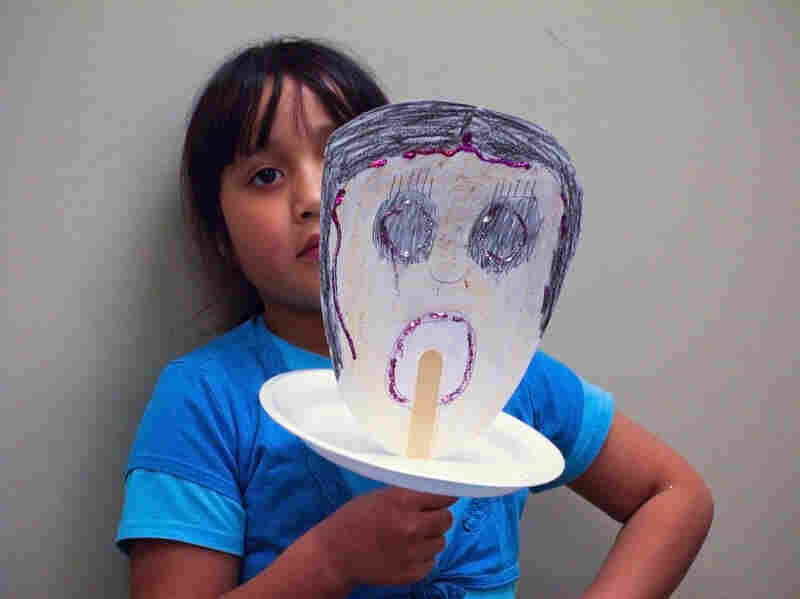 Laura Molina, 9, shows the mask she created expressing the feeling of "sadness." Her mother is being treated for breast cancer at the Lyndon B. Johnson public hospital in Houston. Carrie Feibel/KUHF hide caption 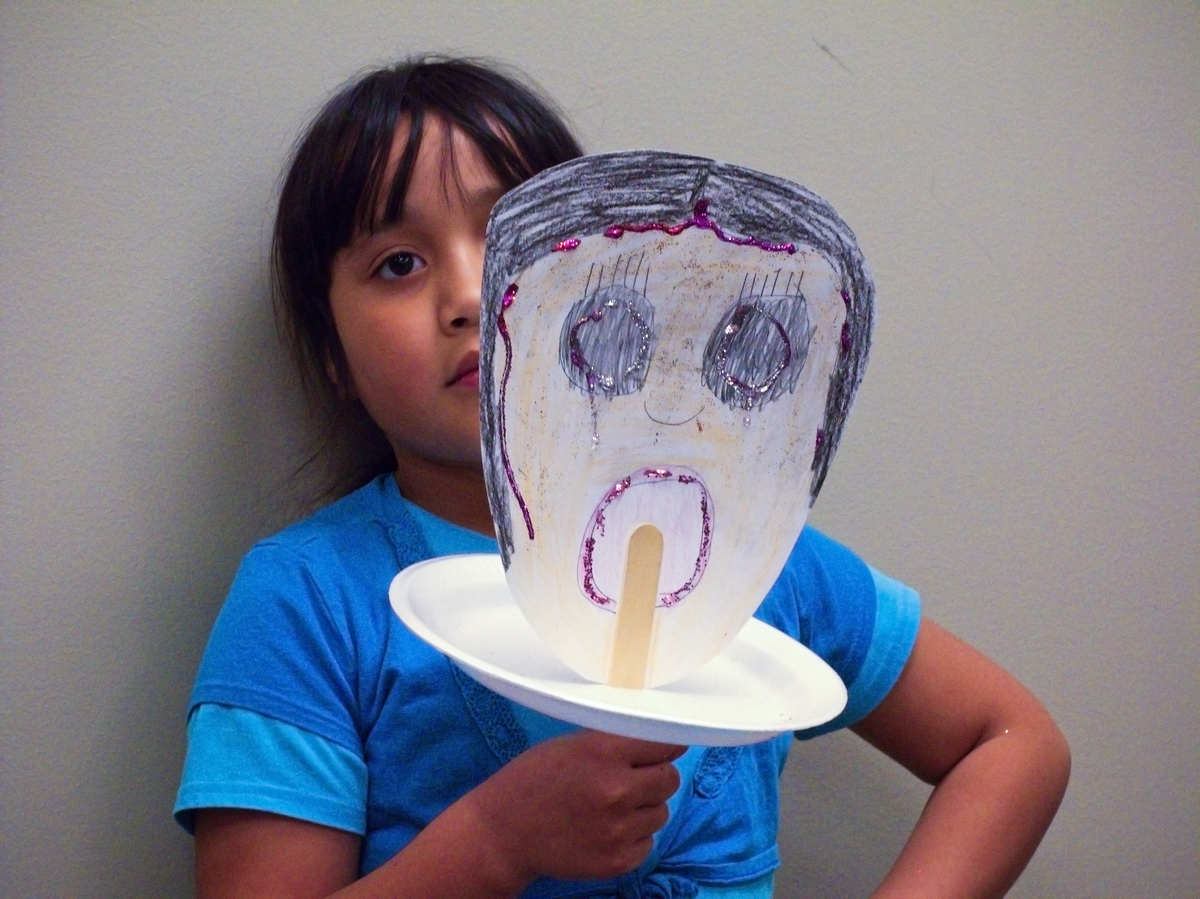 Laura Molina, 9, shows the mask she created expressing the feeling of "sadness." Her mother is being treated for breast cancer at the Lyndon B. Johnson public hospital in Houston.

The Lyndon B. Johnson General Hospital and MD Anderson Cancer Center work with The Children's Treehouse Foundation to offer emotional and practical support for families dealing with the disease.

It's natural for parents to want to protect their children from the bad news of a cancer diagnosis by hiding facts or keeping them vague, says Martha Aschenbrenner, a hospice counselor at MD Anderson. But she urges parents to tell their children what's happening in age-appropriate ways. Whether Mom or Dad is going to die is usually one of the first things a preteen will ask, she says.

"The wrong way to answer the question is, 'No, no, I'm not going to die.' Because you can't promise that," Aschenbrenner says.

"A better way that also invites more conversation is: 'That is not my plan. And I'm going to a hospital where they're going to give me very strong medicine, and I hope and my plan is I'm going to get better. And I'm going to tell you what happens, so you don't have to worry that I'm keeping secrets from you. I'm going to keep you informed.'"

The Susan J. Komen Houston Affiliate funds a support group at LBJ Hospital, a public hospital in the Harris Health System, with a two-year grant of $237,500. That means women with breast cancer and their children can benefit from six weeks of group sessions free of charge.

During a recent meeting of the group called Tender Drops of Love, Lindsey Leal, a child-life specialist at LBJ Hospital, explains to children that parents with cancer sometimes feel sad, but it's not the kid's job to cheer them up.

Coping On Father's Day Without Dad

And as cancer progresses or retreats, parents need to keep the discussion going, therapists say.

Julie Goodman has now had six months of clean scans. Jack is 17 and Lena is 14, and they are adjusting to the diagnosis.

"And they're like 'Yay, OK, what's for dinner?' You know, moving on," Goodman says. "They may be desensitized a little bit to it now. Mom goes to the doctor, Mom comes home, she's fine."

Goodman says she still struggles with how much to tell her kids. On the one hand she wants her children to remember she's not out of danger, not yet.

But she also loves the fact that they're not worried anymore, that they don't think about it every day. Instead, they have what every parent wants for their children — that the everyday be what's for dinner, and walking the dogs, and homework and time for bed.

This piece is part of a partnership with NPR, KUHF and Kaiser Health News.