Accessibility links
Congress May Be Getting Its Own Obamacare Glitch Fixed : Shots - Health News The Obama administration says it has solved a thorny issue that threatened the health insurance coverage of more than 10,000 congressional staffers. But critics say the administration is overstepping its legal authority. 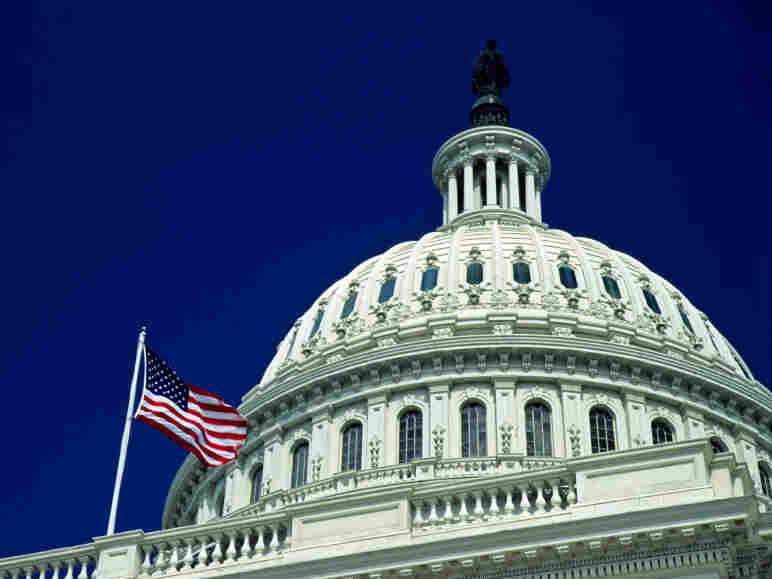 As its last official action before leaving for a five-week summer break, the House today voted — for the 40th time — to block implementation of the federal health law.

But it was something that happened late Thursday night affecting members of Congress and their staffers' own health insurance that attracted more attention around the Capitol.

Back in 2010 when Congress passed the health law, Republicans basically dared its Democratic sponsors to require that members of Congress and about 11,000 of its staffers give up their federal health insurance coverage and join the new health exchanges starting in 2014. Democrats took the dare, writing it into the law.

Only they forgot one important piece — which was to specify whether those lawmakers and staff could take with them their employer's contributions to that health insurance. Right now the federal government pays about 75 percent of the cost of workers' health insurance; the employee pays the other 25 percent.

It prompted something of a bipartisan panic on Capitol Hill.

"The question that was on the table," said Bradford Fitch of the Congressional Management Foundation, a nonpartisan think tank that studies the workings of Congress, "was whether or not congressional staff in essence were going to have any kind of reasonable health care, or whether they were going to have to pay for it all themselves."

It was more than a minor concern for many members of Congress, says Fitch, and not just because it might cost them more out of their own pocket. They've been worried about key staff literally walking out the door.

"We have been hearing from chiefs of staff over the last five or six months and they were expressing concern over the impact of this particular provision on congressional staff," Fitch said. Many were worried "that it might lead to a brain drain, especially among senior staff who would be incentivized to retire at the end of the year."

That's because if they retired, they could keep their federal health benefits.

Enter President Obama, who in a private meeting with Senate Democrats earlier this week promised he was personally involved in the effort to resolve the problem.

And then Thursday night, White House officials quietly let it be known that yes, next week the Office of Personnel Management would announce that members and staff will be able to keep their government insurance contributions when they buy their coverage on the health exchanges. NPR separately confirmed the story Friday.

Fitch says that while the action may solve one problem, it raises others — including the possibility that staffers may end up with unequal benefits.

Obviously if [Congress] were to fix their own problem but not somebody else's problem they would have a huge political blowback.

"For example, if you're a senator from Mississippi, will you have your Washington staff on the D.C. exchange, and your Mississippi staff on the Mississippi exchange?" he asked. "Will that lead to a disparity in health care benefits among employees who are working for the same member of Congress?"

"It's part of [staffers'] compensation here is that they would have health insurance, and now they will, under the Affordable Care Act, through the exchanges," she said.

But not everyone thinks what the administration is doing — or about to do — is within its authority.

"No one so far who's really looked at this sees a legal way for them to do this," said Ed Haislmaier. He's a senior research fellow with the Heritage Foundation and a co-author of a just-released paper arguing that the administration can't fix the problem. Only Congress can. But there's legal — and there's political.

"Obviously if [Congress] were to fix their own problem but not somebody else's problem," says Haislmaier, "they would have a huge political blowback."

Haislmaier says in many ways the problem with the congressional coverage provision mirrors other problems with the health law.

Just to be clear, members of Congress and their staff aren't getting special treatment when it comes to their health insurance. They're just keeping the employer contribution every other federal employee gets.

But they are definitely getting preference when it comes to fixing their own special glitch in the health law.