Accessibility links
Obamacare Foes Make Final Push To Stop Health Law's Implementation : Shots - Health News Less than eight weeks before the official launch of the new health care marketplaces, the Obama administration is ramping up efforts to encourage people to sign up. But some opponents want young people to pay a fine rather than sign up for health insurance, hoping to harm the new law.

A screenshot from the FreedomWorks website, which is urging citizens opposed to the Affordable Care Act to opt out of the law's requirement to have insurance. It asks Americans to symbolically "burn your Obamacare card." In reality, no such card will exist. FreedomWorks hide caption

With less than eight weeks to go before the official launch of the new health care marketplaces under the federal health law, backers of the law are ramping up to encourage people to sign up.

But there's another effort gearing up this month as well. Opponents of the health care law are making one last-ditch effort to run Obamacare off the rails before it gets fully implemented.

Probably the most aggressive effort is coming from FreedomWorks, a conservative advocacy group. It's urging people, particularly young people, not to sign up for health insurance.

"They can skip the exchange, pay the fine, and in doing that, do what's best for them financially, and we hope help hasten the collapse of Obamacare," said Dean Clancy, the group's vice president for policy.

FreedomWorks has also created a bit of civil disobedience theater as part of its campaign — inviting people to symbolically burn (fictional) Obamacare insurance cards. Of course there is no such thing as an Obamacare card. But that's not a problem. FreedomWorks is making its own, and distributing them.

"We're going to be holding burnings around the country," said Clancy. "Without burning anything down," he's quick to add. "It's all peaceful and lawful."

Clancy says the idea is to harken back to the days of the Vietnam War, when protesters burned their draft cards — a federal crime that got many sent to prison.

"The individual mandate at the heart of Obamacare is a lot like a military draft," he said. And if enough young people resist the health law the way they resisted the war, "then Washington will get the signal, we'll be able to reopen this law, and we'll be able to push for patient centered reforms that really help people get the coverage they need."

FreedomWorks isn't the only conservative group aiming squarely at the young demographic considered so key to making the health law work, though. (Young people are necessary to ensure the exchanges aren't overloaded with older, sicker patients.)

Another GOP advocacy group called the YGNetwork — YG stands for young guns — is out with a TV ad that's been airing on youth-oriented programs like Saturday Night Live.

It pokes fun at the Obama administration's efforts to promote the law by showing a frustrated group of advertising executives around a table, trying to figure out how to sell a product that's not very popular.

YGNetwork spokesman Chris Bond says the ad is "simply drawing attention to the fact that they're using taxpayer money in this cynical marketing effort rather than fixing the law so that it doesn't hurt Americans."

But not all the effort to stop the law in its tracks is being aimed at the young. Heritage Action, the advocacy arm of the Heritage Foundation, is launching a nine-city Defund Obamacare Town Hall Tour starting later this month.

Dan Holler, the group's spokesman, says time is of the essence.

"On Oct. 1 open enrollment starts for the Obamacare exchanges," he said. "And on Jan. 1 there's a ton of money that starts flying out the door. And up until now, most of the conversation about Obamacare has been, 'this is going to happen at some point in the future.' The future is now on this." 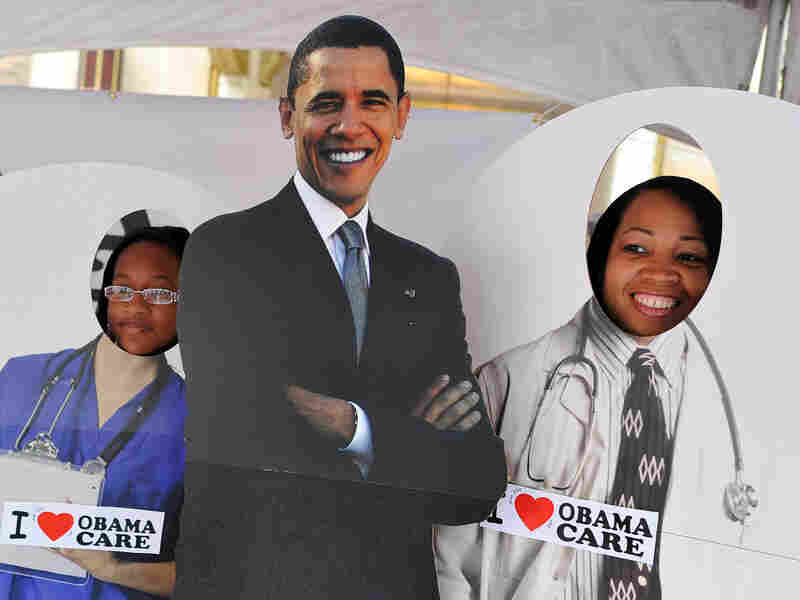 Two girls pose for a picture with a cardboard cut-out of President Obama in a tent defending "Obamacare" in Charlotte, N.C., on Sept. 3, 2012. Mladen Antonov /AFP/Getty Images hide caption 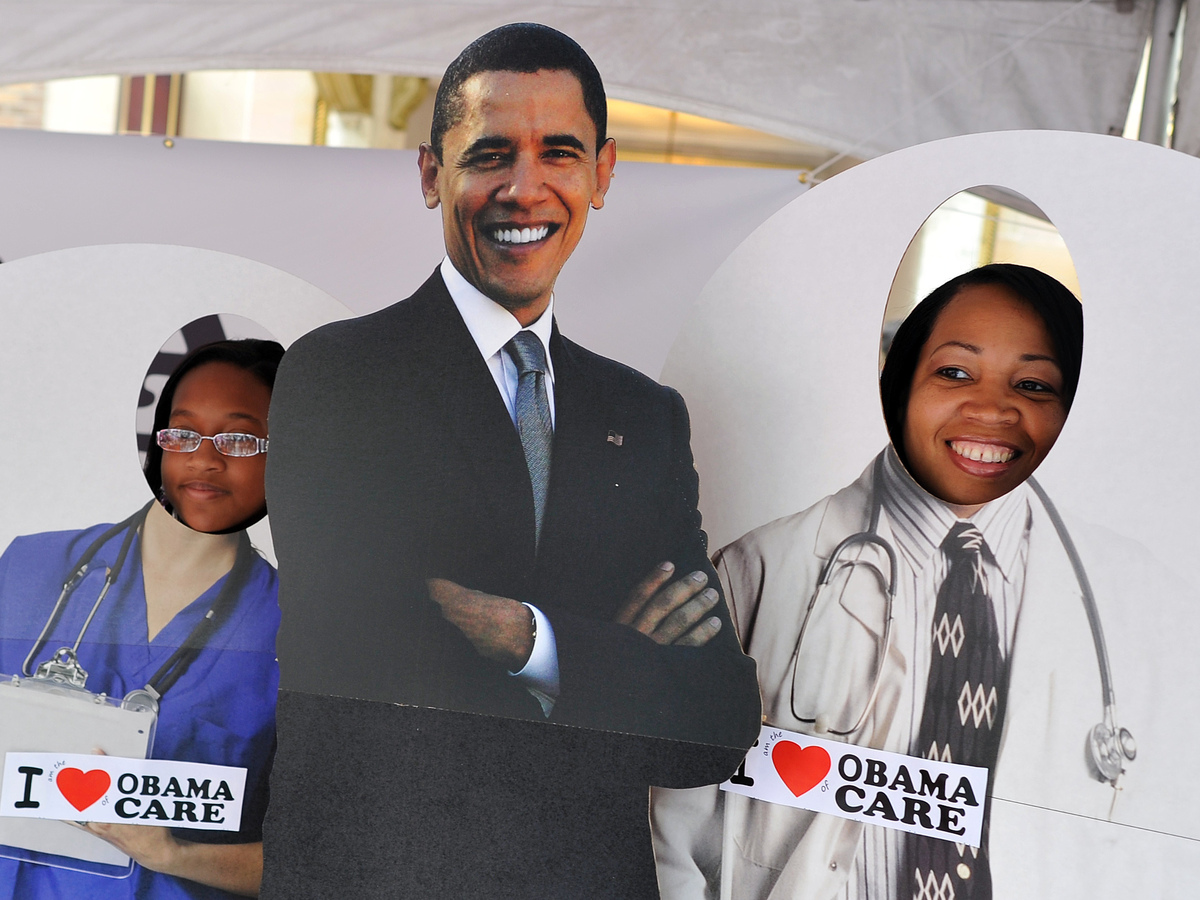 Two girls pose for a picture with a cardboard cut-out of President Obama in a tent defending "Obamacare" in Charlotte, N.C., on Sept. 3, 2012.

Unlike many of the other groups, however, Heritage isn't urging people not to enroll in the exchanges. It's concentrating on getting grass-roots support to get Congress to pull the plug on the law's funding.

"Right now there's a viable legislative strategy to go ahead and halt the implementation of Obamacare," Holler said. "And we want to drive that as hard and as far as we possibly can. And the town halls are an effort to do just that."

And what does the Obama administration think of all these efforts to interfere with the law's rollout? Not a lot, at least according to Health and Human Services Secretary Kathleen Sebelius.

"I don't think we're going to spend a lot of time and effort trying to estimate who they may discourage from getting health insurance to provide security for themselves and their family," she told reporters on a conference call Monday. "I think it's a pretty dismal effort underway."

The administration does have backup, though. Groups like Protect Your Care will be out countering the Republican efforts, says spokesman Eddie Vale.

"When Republican members are having town halls, we will have local people come to them to ask why they keep trying to take away their health care," he said. "When Heritage or Americans for Prosperity are doing their events, we will of course send people out to those."

And Vale wonders about the irony, in particular, of the FreedomWorks card burning effort.

"They're asking people literally to play with fire and burn Obamacare documents while at the same time telling these very same people that they shouldn't have health care," he said.

For the record, FreedomWorks officials caution people not to burn themselves while they're burning their cards.