Accessibility links
Camels May Be A Source Of The Middle East Coronavirus : Shots - Health News Scientists find the a tantalizing clue about where people may be catching the Middle East respiratory syndrome. Camels on the Arabian Peninsula and Canary Islands show signs that they've been infected with the virus or a close relative. 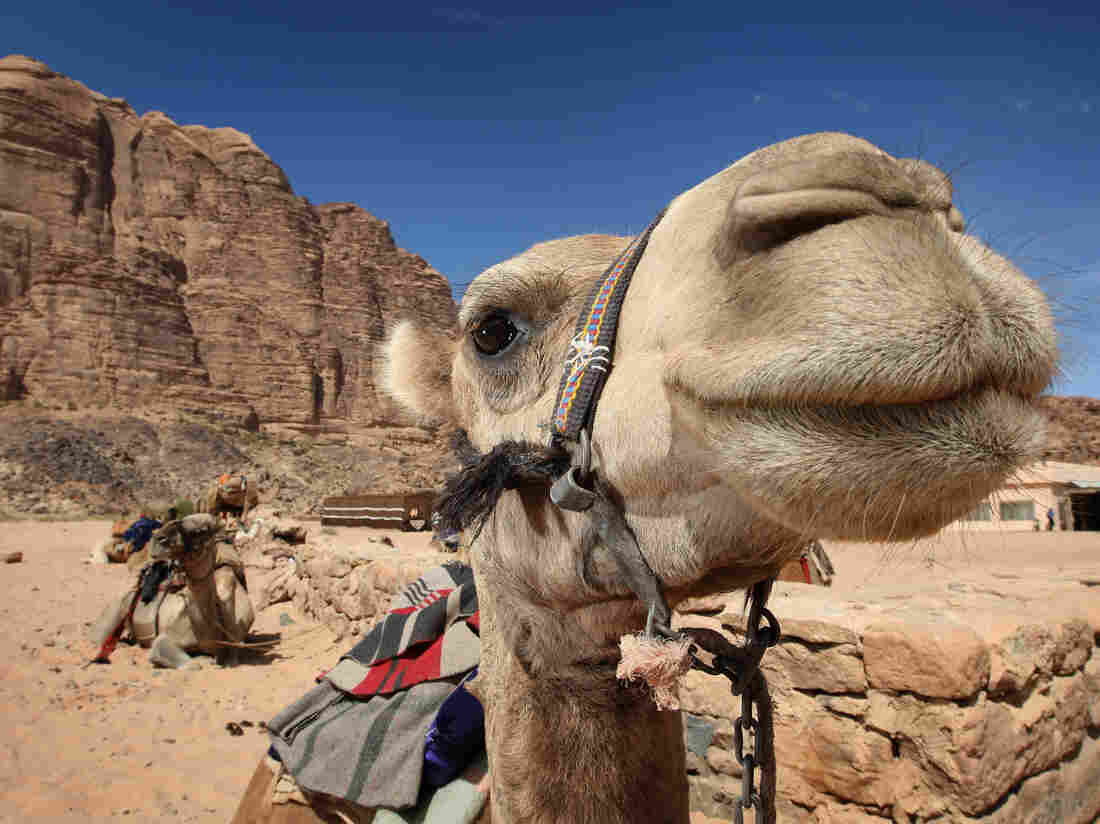 A dromedary camel waits for a tourist to hop on its back in Petra, Jordan. The country has recorded two cases of the Middle East respiratory syndrome. Chris Jackson/Getty Images hide caption 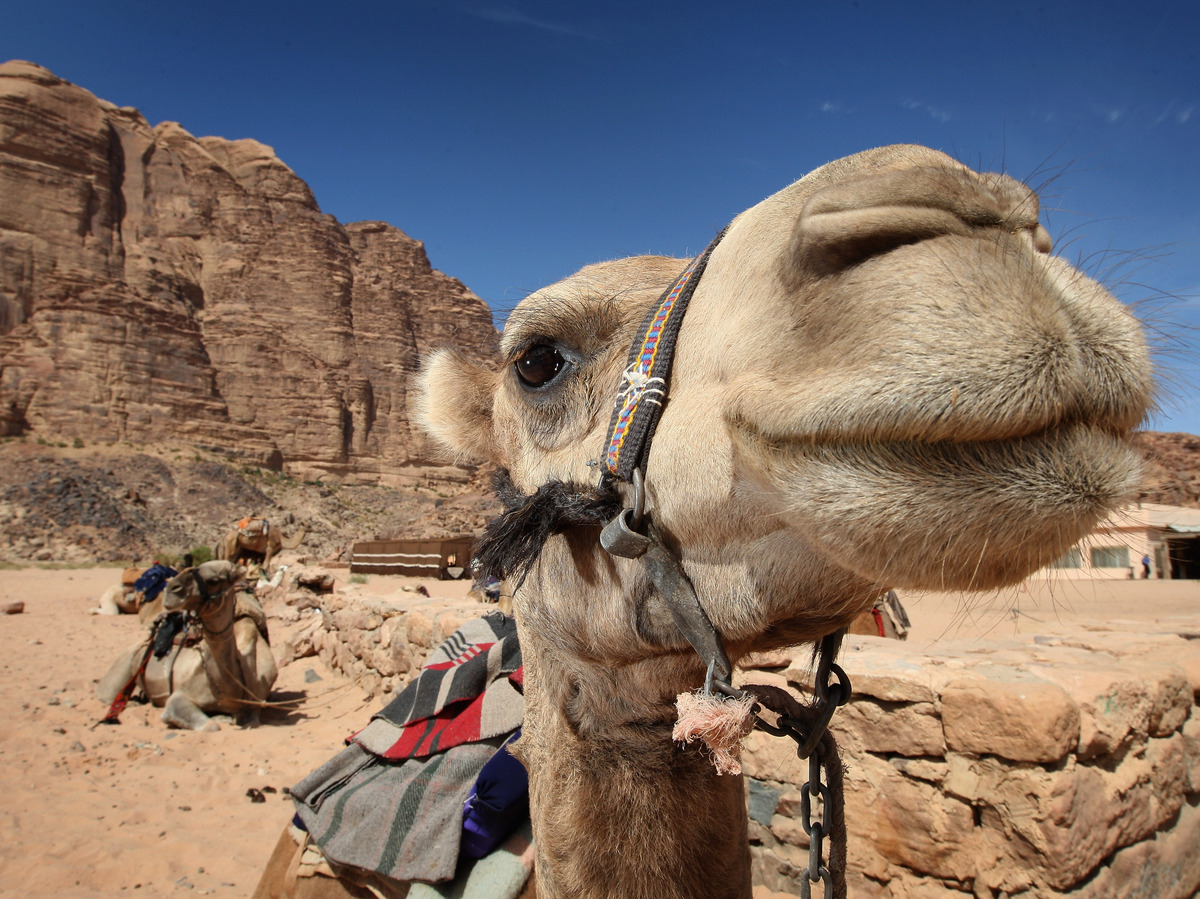 A dromedary camel waits for a tourist to hop on its back in Petra, Jordan. The country has recorded two cases of the Middle East respiratory syndrome.

Scientists have found evidence that dromedary camels — the ones with just one hump — may be carriers of the lethal coronavirus in the Middle East, which has infected at least 94 people and killed 46 since first appearing in Saudi Arabia last year.

People with MERS typically have flu-like symptoms, which can progress into severe pneumonia and then organ failure.

The findings, published Thursday in the journal Lancet Infectious Disease, offer a new clue about where people might be catching the virus — one of the big mysterious surrounding the Middle East respiratory syndrome, or MERS.

Virologist Marion Koopmans and her team at the National Institute for Public Health and the Environment in the Netherlands looked for signs of previous MERS infections in 50 retired racing camels in Oman, which borders Saudi Arabia to the south. The team also tested 105 camels in the Canary Islands, Spain, off the coast of Western Africa.

All 50 Omani camels had antibodies in their blood to the MERS virus or a close relative. And to Koopmans's surprise, 14 percent of the camels from the Canary Islands also tested positive for the antibodies.

"There is something like MERS infecting camels on the Spanish islands," Koopmans tells Shots. "But the levels of antibodies were much higher in the Omani animals. The camels in Spain may have been exposed to the virus sometime longer ago."

So far, all the MERS cases have originated from the Arabian Peninsula — although a few travelers have brought the virus to France, Germany, Tunisia and the U.K. 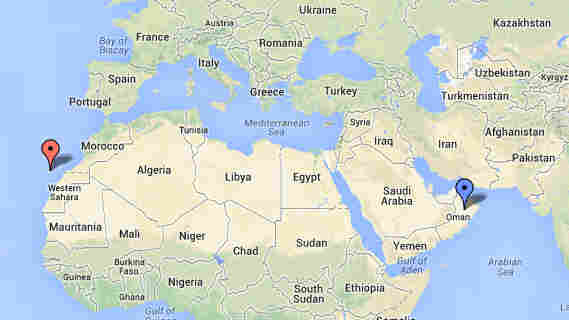 Oman (blue pin) and the Canary Islands (red pin) are more than 4,000 miles apart. But camels in both places show signs of carrying the Middle East respiratory syndrome. Courtesy of Google and MapLink hide caption 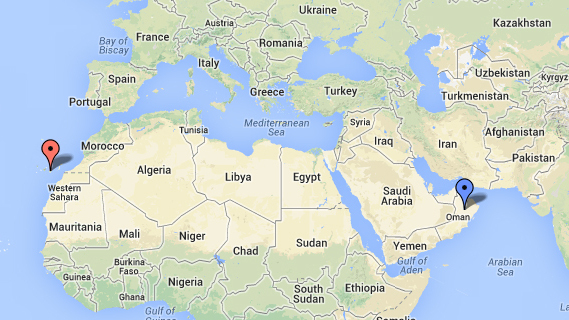 Oman (blue pin) and the Canary Islands (red pin) are more than 4,000 miles apart. But camels in both places show signs of carrying the Middle East respiratory syndrome.

Courtesy of Google and MapLink

Antibodies are molecules made by the immune system to fight off an infection. They typically are specific to a particular pathogen, but if two viruses look very similar, one antibody could recognize both.

"So we cannot be 100 percent sure that those antibodies [we found] were triggered by MERS," Koopmans says. "But we think it's likely that they were. We've done many tests to rule out other coronaviruses."

MERS is in the same family of coronaviruses that cause the common cold. But it's also a cousin to the SARS virus, infected more than 8,000 people and killed more than 800 in 2003.

Until these new findings, several signs had pointed to bats — or their excrement — as a likely source for MERS. The flying mammals like to hang out in date trees in eastern Saudi Arabia, where many cases have occurred. And MERS is most closely related to a bat virus.

But Koopmans says the bat hypothesis didn't really make sense to her. "Bats all over the world have nasty viruses," she says. "But we rarely see those in people. It would be strange if all the sudden you have so many people infected with that virus."

Camels seem like a better candidate, she says. But they can't say for sure until they find the MERS virus itself in the animals and check other livestock on the Arabian Peninsula. At least now, Koopmans says, they have a better idea about where to look.