Accessibility links
A Safety Checklist To Save Teen Athletes' Lives : Shots - Health News Many sudden deaths among high school athletes are preventable with the right precautions. 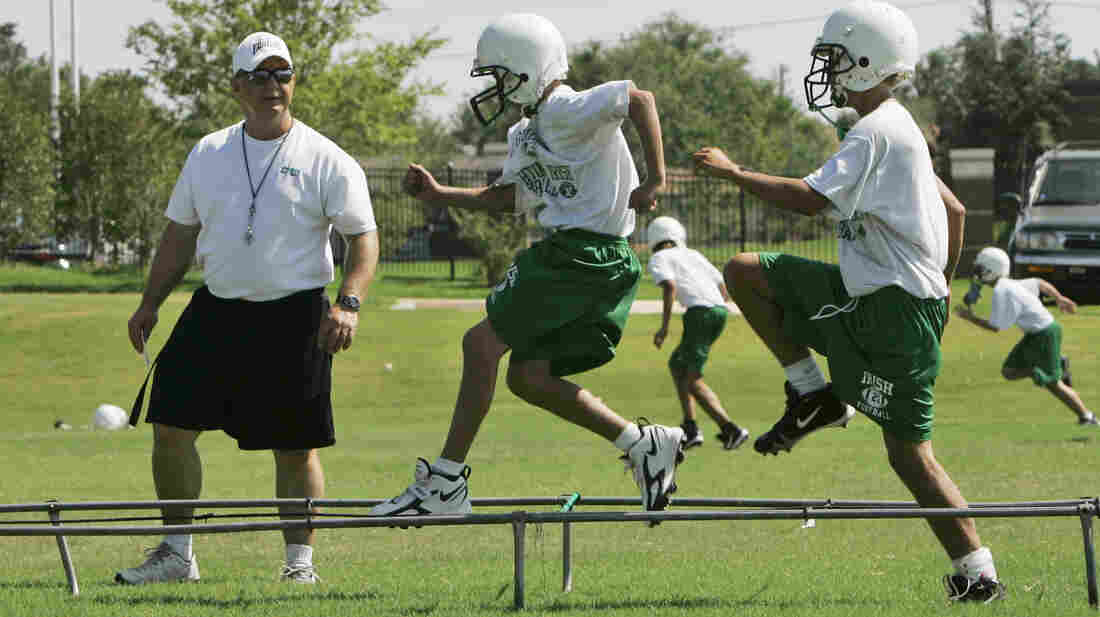 Ray Copeland, a football coach at Bishop McGuinness High School, puts his players through a workout in Oklahoma City in 2007. As is often the case in much of the U.S., the first day of high school football practice that year began in a heat wave. AP hide caption 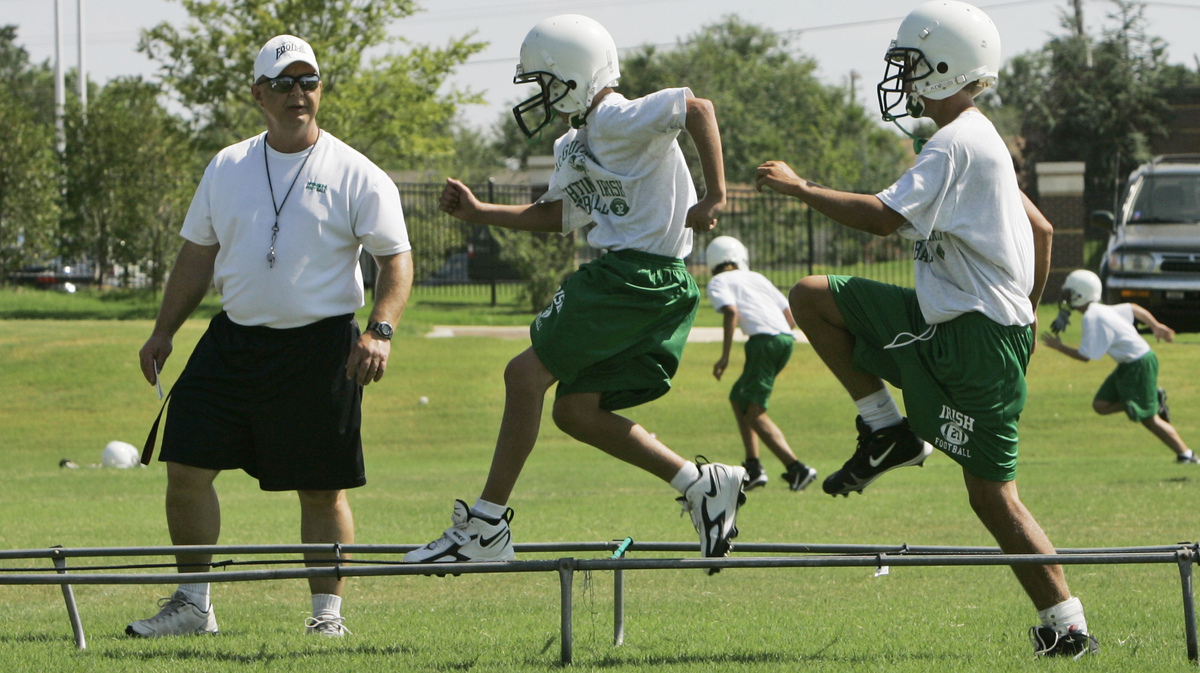 Ray Copeland, a football coach at Bishop McGuinness High School, puts his players through a workout in Oklahoma City in 2007. As is often the case in much of the U.S., the first day of high school football practice that year began in a heat wave.

For all the benefits of exercise and teamwork to the heart and head, high school athletes still lead the nation in athletics-related deaths. And it doesn't have to be that way, sports medicine specialists say.

It's unbelievable that some of the same schools that insist on having a school nurse on hand to handle emergencies from 8 to 2 don't have a medical professional onsite to make key decisions after school when students are exerting themselves in the heat.

Many student deaths from head and neck injuries, heat stroke, sudden heart trouble and exertion-related sickle cell crises can be prevented, according to a scrum of leading sports doctors, athletic trainers, research physiologists and high school administrators who have endorsed a detailed set of guidelines for keeping high school athletes safe.

"The idea was to create something that schools could almost use as a checklist," says Douglas Casa, who helped shape the consensus guidelines published in the August issue of the Journal of Athletic Training. Casa, who led a similar effort to produce conditioning guidelines for college athletes in 2012, is a sports physiologist at the University of Connecticut in Storrs, and chief operating officer of UConn's Korey Stringer Institute.

Some of the key recommendations for high schools follow.

Have a certified athletic trainer available during games and practices. Roughly a third of public high schools and many private ones don't do that, Casa tells Shots, and it's a problem during emergencies. "It's unbelievable," he says, "that some of the same schools that insist on having a school nurse on hand to handle emergencies from 8 to 2 don't have a medical professional onsite to make key decisions after school when students are exerting themselves in the heat or under other extreme conditions."

Have an AED (automated external defibrillator) within easy reach during practices and games to jump-start a heart that suddenly fails. "Cardiac problems are becoming much more survivable, but the AED has to be out on the field with the athletic trainer and on the kid's chest within a minute after the heart stops to save a life," says. Running inside the school to pull the device from the hallway case isn't fast enough, he says.

Have water freely available at all times, and give student athletes a tightly structured, several-day acclimatization period at the start of every season — especially in summer — with shorter, less intense practices that will help their bodies adjust to the big shifts in heat and exertion of a full game or regular practice.

Football Uniforms Turn Up The Heat

Cool the victim of a heat stroke immediately, even before transport to the hospital. "You've got to get their body temperature down to under 104 degrees within 30 minutes of collapse if you want to save somebody's life," Casa says. The guidelines recommend immersion in ice cold water. "Every high school has ice and water, and the tank costs $150," Casa says. "It's worth it."

Recommend that all players, especially any "performing intense physical activity," check with their doctor to see if they carry the sickle cell trait. All newborns in the U.S. these days are screened for the sickle cell gene, so the player's pediatrician may have the results on file. (Note that people with sickle cell disease inherit two copies of the gene responsible for the illness; those with the trait have only one copy-- a condition that is usually benign. Rarely, though, according to the American Society of Hematology, "extreme conditions such as severe dehydration and high-intensity physical activity," can prompt serious health issues, including sudden death.) Casa's guidelines stop short of suggesting mandatory screening of all athletes for the trait. The NCAA requires college athletes who want to play at the Division I or Division II level to have the test or sign a written release. As Shots described in a post last year, the NCAA's mandatory testing of athletes for the sickling trait is controversial.

Casa says it's important to alert anyone overseeing athletic activity that shortness of breath, muscle pain or cramping, low back pain and difficulty recovering from exercise could be signaling the rare but serious exertional sickling crisis (particularly at high altitudes, or during heat waves, or during the sport season's first days of heavy exertion). High schools that carefully follow the rules regarding hydration and gradual acclimatization can greatly minimize the chances of the problem developing, Casa says. "No one who has the sickle cell trait should be denied participation in any sport," he adds.