Accessibility links
Teen Girls' Yen For Indoor Tans Sparks Battle Over Risks : Shots - Health News Dermatologists say it's a lot easier to manage the skin cancer risk to young people from indoor tanning than it is to ban the sun. But the indoor tanning industry says doctors should be more focused on skin cancer in older folks. 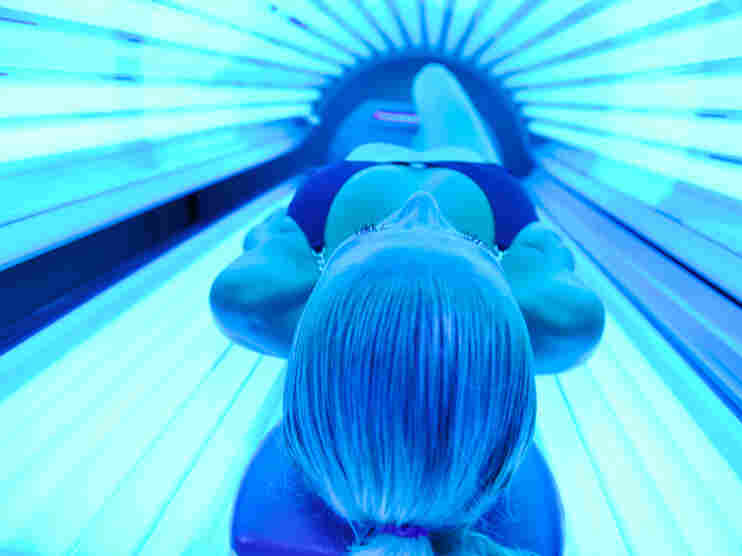 So a report in JAMA Internal Medicine that found about a third of white high school girls indulge in indoor tans wasn't exactly startling. What was a bit startling was how the tanning industry responded, saying, in effect, that we should be worrying more about skin cancer in middle-aged men, not girls.

Rather than "targeting sun abstinence campaigns at young women," the American Suntanning Association said in a statement, the Centers for Disease Control and Prevention, which reported on high school girls and indoor tanning, "should support teaching sunburn prevention to people of all ages. It could not be any more clear that skin cancer rates are skyrocketing in men, and particularly men over age 50, but CDC has inexplicably ignored this group."

We don't recall any skin cancer campaigns telling older men that they can kick back and stop worrying about funky spots on their skin. And, of course, it's well-known that skin cancers are much more common among older people.

It can take decades for the exposure to ultraviolet light from the sun to result in cancer. And older people are more susceptible to cancer overall.

But are the tanning salons really saying that we shouldn't worry about skin cancer in young people?

"They should be teaching sunburn prevention to people of all ages," says Joe Levy, executive director of the International Smart Tan Network and a spokesman for the American Suntanning Association, which represents tanning salons. "That's not what they're teaching here."

His organization questions studies that find that people who bask under indoor UV lamps or on tanning beds are more likely to get melanoma, as well as less serious squamous and basal cell skin cancers.

Melanoma rates rose 3 percent a year in white teenagers and young adults from 1992 to 2004, an increase researchers attribute to exposure to both natural and artificial UV light.

Those studies find a correlation between indoor tanning and skin cancer, Levy told Shots, but not a direct cause.

But doctors and public health advocates say it's abundantly clear that exposure to UV light from any source boosts skin cancer risk. Period. They look at the numbers and figure it's a lot easier to get rid of the tanning bed than it is to get rid of the sun.

"It is a preventable cause of cancer," says Dr. Henry Lim, chief of dermatology at Henry Ford Health System in Detroit.

Teenagers' fondness for indoor tanning is troubling, Lim says, because there's evidence that early and frequent use of indoor tanning increases cancer risk and because teens are less well-equipped to weigh the consequences. "This is a very specific group of individuals," Lim told Shots. "Very impressionable, with a lot of peer pressure."

As a result of pressure from public health advocates and medical societies, five states now ban access to tanning salons by minors, and 33 states limit access. Earlier this year the Food and Drug Administration proposed to stiffen regulation of tanning beds and sunlamps.

The changes wouldn't prohibit teens from using these "sunlamp products," as the FDA plans to call them, but would make labels and other warnings on the risks clearer and consistent, including a recommendation that frequent users be regularly screened for skin cancer.

"The units already have warning labels," Levy told Shots. "They already acknowledge that overexposure is a risk factor. And frankly there is nobody today that doesn't understand that already."

Or, as a statement on the ASA's Web page about managing the risks of indoor tanning says (italics theirs):

Notice: Exposure to ultraviolet radiation may increase the risk of skin damage, skin cancer and can cause serious eye injury.

"Overexposure is harmful," Levy says. "We have always said that. But it's very, very difficult to make that stick when the dermatologist is saying conveniently that any exposure is bad."

But based on the CDC numbers, it looks like teenage girls are more likely to listen to their peers than the dermatologist, at least so far.