Accessibility links
For Strokes, Superfast Treatment Means Better Recovery : Shots - Health News A new study says that getting treatment within 90 minutes of a stroke leads to excellent recovery for many people. It's often hard to get treatment that quickly, doctors say. But hospitals and patients really need to try. 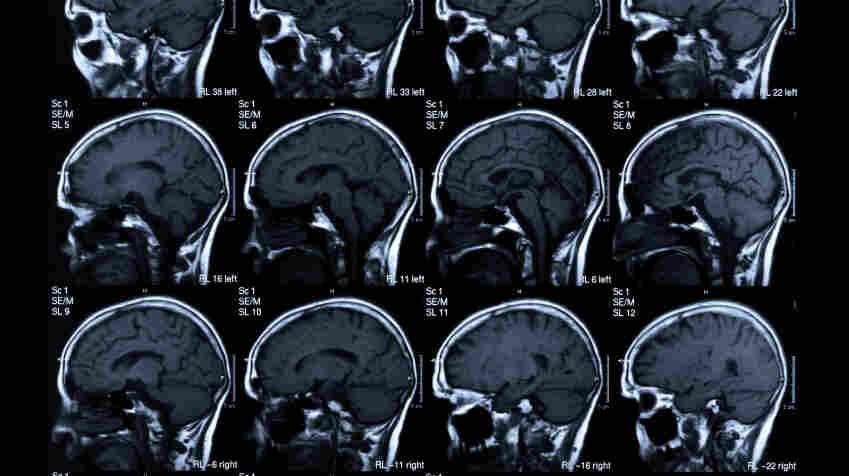 Time is brain, the saying goes. The faster people get treatment for a stroke, the less brain damage they suffer. A new study says much faster is much better, especially for mild and moderate strokes.

People treated with a clotbusting drug within 90 minutes of having symptoms of a stroke had excellent recoveries, with less lasting disability.

The scientists compared the records of 6,856 people who were treated for strokes in 10 European stroke centers. About 20 percent of the people were treated with clotbusting drugs within 90 minutes of reporting sudden symptoms like vision problems, weakness in a limb, or difficulty talking.

Even A Small Change In Habits Helps Fend Off Stroke

"What this just reinforces is that earlier is better," says Dr. Larry Goldstein, a professor of neurology and director of the Duke Comprehensive Stroke Center. "There's nothing magical about 90 minutes."

That 90 minutes was the cutoff picked by the researchers in the study, which was published Thursday in the journal Stroke. Clotbusting drugs are approved by the Food and Drug Administration for use within three hours of symptoms, but Goldstein says "three hours was never good enough."

The real gold standard in the United States is treatment within an hour after a patient comes in the emergency room door, but that's not easy to do.

The only way that can even remotely happen is in places organized to give stroke care," Goldstein, who is a spokesman for the American Heart Association but did not participate in the research, told Shots. 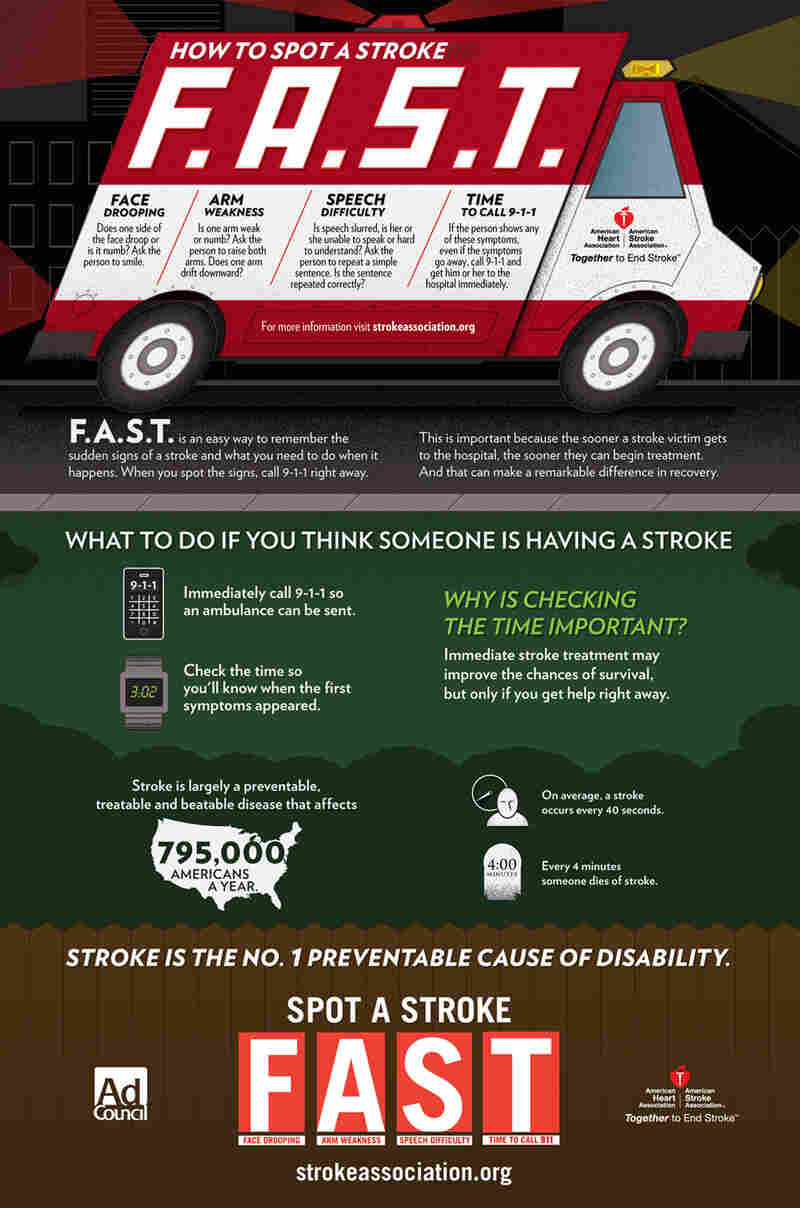 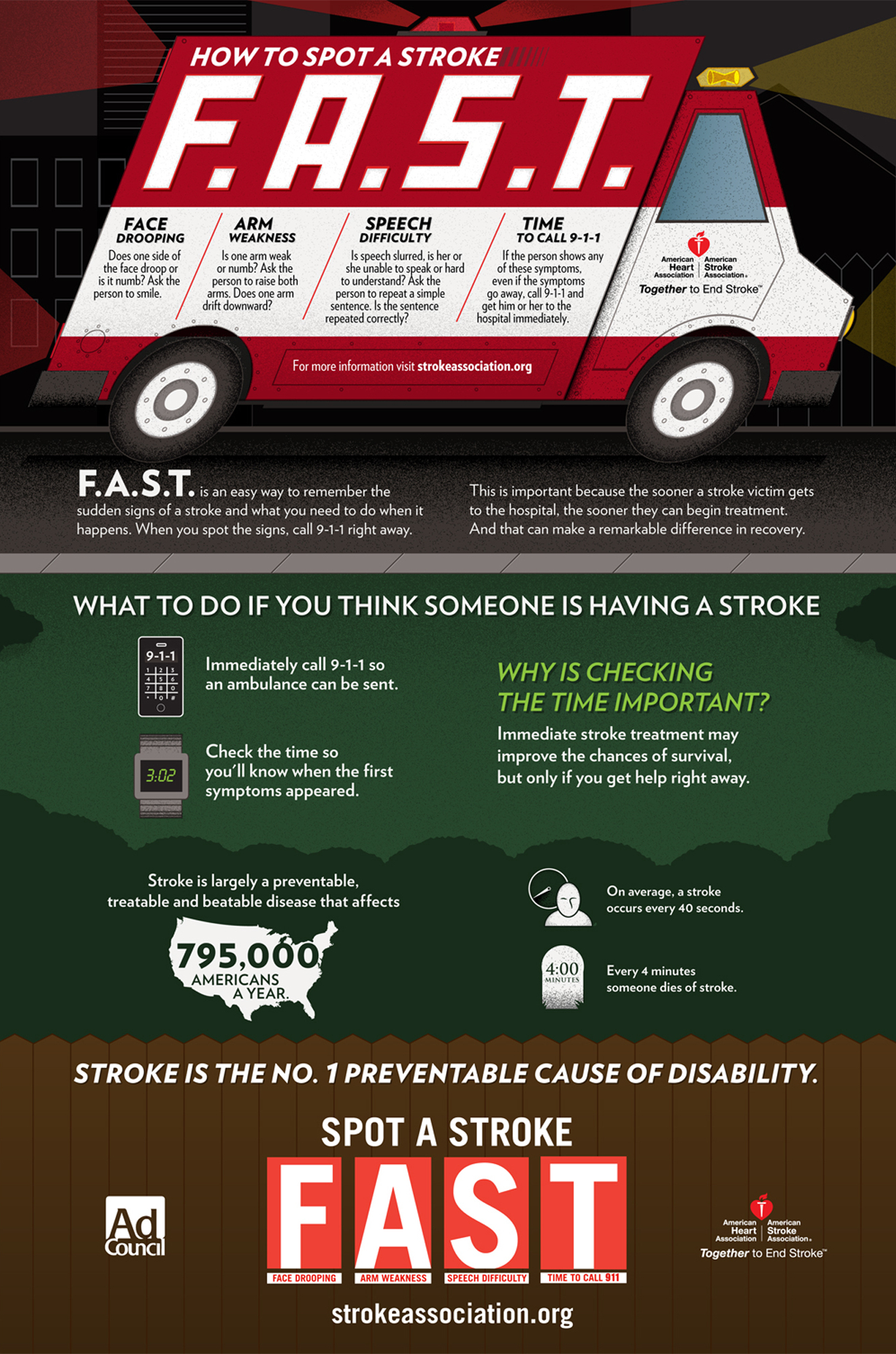 FAST: A simple way to remember at least some stroke symptoms.

There are a patient history to be taken, lab tests to be run and a brain imaging study to be done. Doctors have to be sure that the patient doesn't have a hemorrhagic stroke, where a blood vessel bursts and bleeds into the brain. Using clotbusting drugs on those people can cause catastrophic bleeding. Ischemic strokes, in which a clot blocks blood flow, are more common and are treated with tPA, a drug that is given intravenously to dissolve clots.

Some hospitals are specializing in rapid stroke treatment and seeking certification under the Joint Commission, an independent organization. There are more than 800 certified primary stroke centers in the United States. (This website can help locate stroke centers near you.)

But the hospital can't treat stroke if a patient doesn't go there. The AHA has been promoting the mnemonic FAST, for face, arm, speech, time. The notion is that stroke symptoms often reveal themselves as a face slack on one side, a weak arm, or slurred speech. ("Time" is "time to call 911.")

"The only issue is that patients can still be having a stroke with significant deficits that's not covered [by FAST]," Goldstein says. "There are other symptoms that people need to think about." They include vision problems, a suddenly weak leg, or issues with balance and coordination.

In the study, people who had moderate strokes got the most benefit out of jackrabbit-quick treatment with tPA. That may be because people with severe strokes have larger clots that are blocking blood flow to larger areas of the brain, and the clots are too big to be dissolved completely, the researchers say.

The results were published online in the journal Stroke.