Accessibility links
Scientists Put A 'Sixth Sense' For Numbers On Brain Map : Shots - Health News Ever wondered how Dustin Hoffman's character in Rain Man quickly counted all those toothpicks on the floor? Scientists have found a region of the brain that allows us to estimate quantities at a glance. Unlike Hoffman's Ray, though, most people are accurate up to only about five toothpicks.

Scientists Put A 'Sixth Sense' For Numbers On Brain Map

Scientists Put A 'Sixth Sense' For Numbers On Brain Map

One of the most famous scenes in the movie Rain Man unfolds when a waitress drops a box of toothpicks on the floor. Dustin Hoffman's character, Ray, takes a look and says, "82, 82, 82." He quickly sums the numbers, declaring, "Of course, 246 total."

It was almost if Ray had a sense about how many toothpicks were there. That he didn't actually need to count them. Turns out, we all have a bit of this ability — although few of us are as facile as Ray.

Scientists have found a region of the brain that quickly senses quantities. It's a small patch of neurons just above each ear that allows us to say at a glance, "Oh yeah, there are five meatballs on my plate, but there are maybe a hundred strands of spaghetti."

In seconds, Ray knows there are 246 toothpicks dropped on the floor.

Some scientists think of this ability as a kind of sixth sense, something like a number sense. One reason is that the skill appears to originate in specific parts of the brain much like our sense of touch and sight, a team of scientists said Thursday in the journal Science.

"When we see a small number of items visually, we don't need to count them," says Ben Harvey, of Utrecht University in the Netherlands, who lead the study. "We just know how many there are straight away."

Most people hit their limit at around five items, Harvey says. Then people get less and less accurate about estimating the quantity.

But there's definitely variation among people. "One subject we measured was just beautiful," he says. "His brain responds all the way through the number eight."

The better you are at number sensing, Harvey says, the better you tend to do on standardized mathematical tests. "This part of the brain — and the ones nearby — is active when you do math and solve equations, as well." But it's distinct from the region that recognizes numerical symbols, like a "5" displayed on a computer screen.

Monkeys aren't mathematicians, but previous studies had found neurons in monkeys' brains that light up when the animals see a specific quantity, like three circles on the screen. 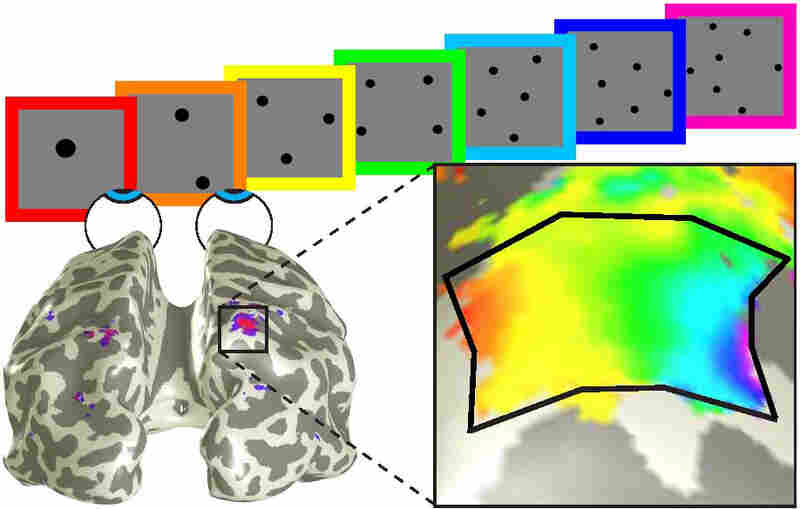 A sixth sense? A small patch of neurons on either side of the brain recognizes how many dots are on a screen. As more dots appear, active neurons shift to the right. Courtesy of Ben Harvey/Utretch University hide caption 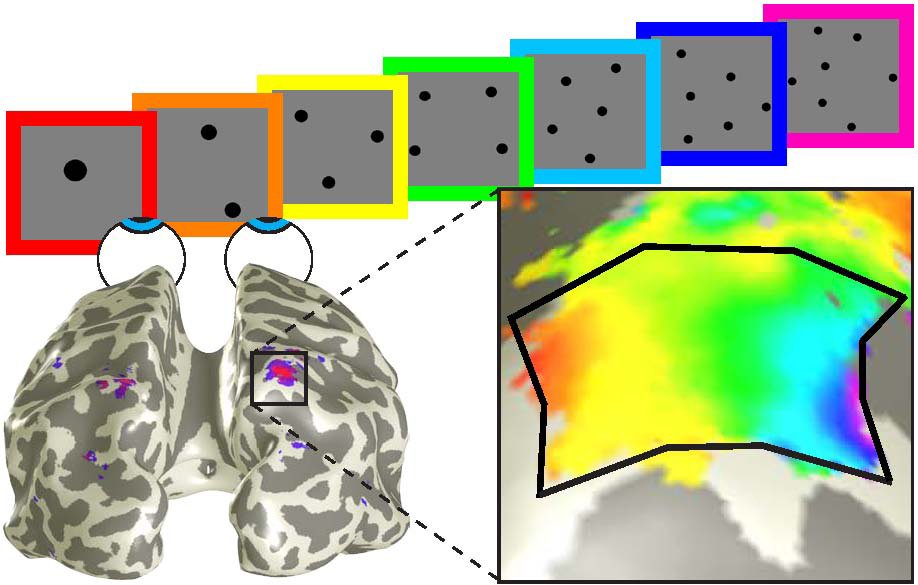 A sixth sense? A small patch of neurons on either side of the brain recognizes how many dots are on a screen. As more dots appear, active neurons shift to the right.

So Harvey and his team went hunting for similar neurons in people. The team showed people a series of circles on the screen: one circle, then two circles all the way up to eight circles. They mapped the activity in their brains using a technique called functional magnetic resonance imaging.

Throughout the experiments, a group of about 80,000 neurons — or a clump about the size of a postage stamp — kept lighting up in the fMRI for all eight people they studied. And there was a pattern: Neurons that sensed the smaller numbers were located on one side of the patch while those that responded to larger numbers were on the other side.

It's similar to how the brain organizes other senses, like touch and sight. "There are maps on the brain that represent the surface of the skin — or the surface of the retina," Harvey says. "These all reflect an external organ. We found the first map for a cognitive function."

The brain allocates more computing power for tasks it wants to excel at. "For seeing, there's more neurons that process the center of the field vision, where you have very sharp vision," he says. "For touch, you have huge hands mapped onto the brain, but smaller ones for legs."

The same strategy gets applied to numbers. More neurons are devoted to sensing smaller quantities than larger ones, Harvey and his team found. That's probably why most people can't count 246 toothpicks on the floor in a flash but can quickly do it for five toothpicks.

That brings us back to Ray in Rain Man. Could some people have even more neurons in their number-sense region and wind up with extraordinary capabilities like Ray?

It's too soon to tell, Harvey says.

"The idea is well known because of the movie Rain Man, but few such people exist. And we haven't scanned one," he says. "So we don't really know whether they are doing the same task — that is, determining large numbers quickly and accurately, like we all do for small numbers. We would be very excited to meet one of those savants."