Accessibility links
Even When Told True Risks, Kids Often Misjudge Them : Shots - Health News Ask a 9-year-old how likely it is that his bike will be stolen, and he'll probably lowball the risks — even after you tell him the odds. Researchers say children and teens aren't very good at applying data about on dangers, which may explain their seemingly irrational decision-making.

Even When Told True Risks, Kids Often Misjudge Them

Even When Told True Risks, Kids Often Misjudge Them 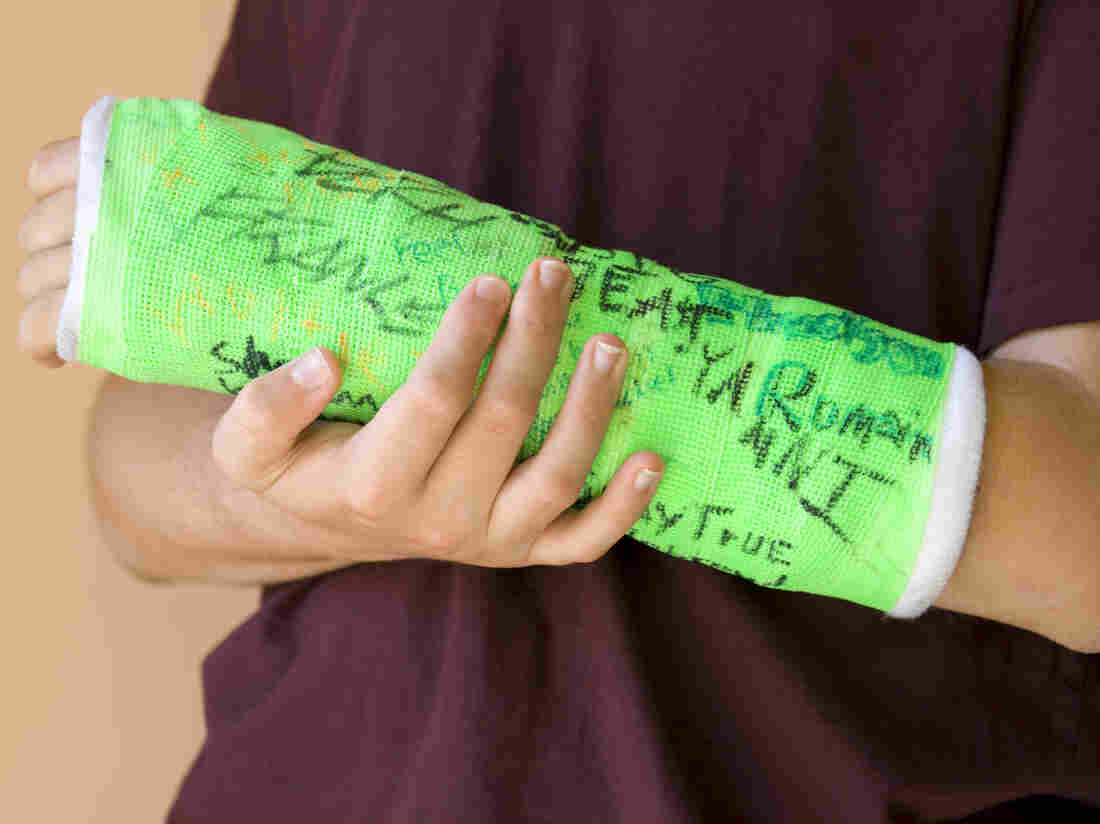 I told him he would break his arm if he did that. But he did it anyway. iStockphoto.com hide caption

Parents are forever warning children and teenagers that bad things will happen if they take big risks. But the kids never seem to listen. That may be because their brains just aren't properly processing the odds that they'll break an arm or be in a car crash.

To find this out, researchers at University College London asked 59 young people, ages 9 to 26, to guess the odds that particular bad things would happen to them. The list of 40 unfortunate events ranged from being seriously injured in a car crash to getting lice.

After they guessed, they were told the real odds of those bad things. Evidently 1 in 3 Londoners is likely to be a victim of burglary during his or her life.

After being told the real risk, the participants were asked to guess the odds once again. They were all good at remembering the actual risk if it wasn't as bad as they'd originally thought.

But the younger the participant, the worse they were at recalling the risks when they were worse than they had first thought.

Could This Happen To You?

Study participants were asked to guess the odds of experiencing problems like:

The problem, though, wasn't really that the kids couldn't remember. "We actually checked people's memory," say Tali Sharot, a psychologist who studies the neuroscience behind decision-making at University College London and an author of the study. Sharot and her colleagues also adjusted for the fact that the older participants should be better at learning facts. And they made sure that all the people understood percentages.

And it wasn't that the youngsters were raving optimists. No Pollyannas there.

But the older the participants, the better they were at accurately adjusting their expectations when warned about a real danger. The younger participants just randomly adjusted risk.

This may be why teenagers seem to disregard warnings about the risks of drinking and driving, smoking and other evils, Sharot tells Shots. All humans tend to discount bad news while expecting things to work out. This study suggests that the ability to incorporate risks into decision-making is something it takes years to learn.

The results were published online in the Proceedings of the National Academy of Sciences.

The study findings square with neuroscience showing that positive information is processed in many parts of the brain, while negative information tends to be centered in the prefrontal cortex, Sharot says. That's the part of the brain that matures last, into the 20s in many cases. It's the area in charge of judgment and problem-solving.

"We learn better from good news than from bad news," Sharot says.

Parents may gain more traction by emphasizing the benefits of avoiding risk. "If you want your kids to eat their fruits and vegetables, it's not that you'll get sick if you don't eat it," she says. "You'll be smart and better at sports."

Teenagers might benefit from being reminded that they'll be more likely to make the basketball team if they're not smoking cigarettes.