Accessibility links
Why Painting Tumors Could Make Brain Surgeons Better : Shots - Health News Cut a tumor from a child's brain and you may save a life. But surgery can hurt the child if healthy brain cells are removed. A Seattle doctor is working on a substance that might help. It binds tightly to cancer cells and makes them glow, so they're easier to distinguish from healthy tissue. 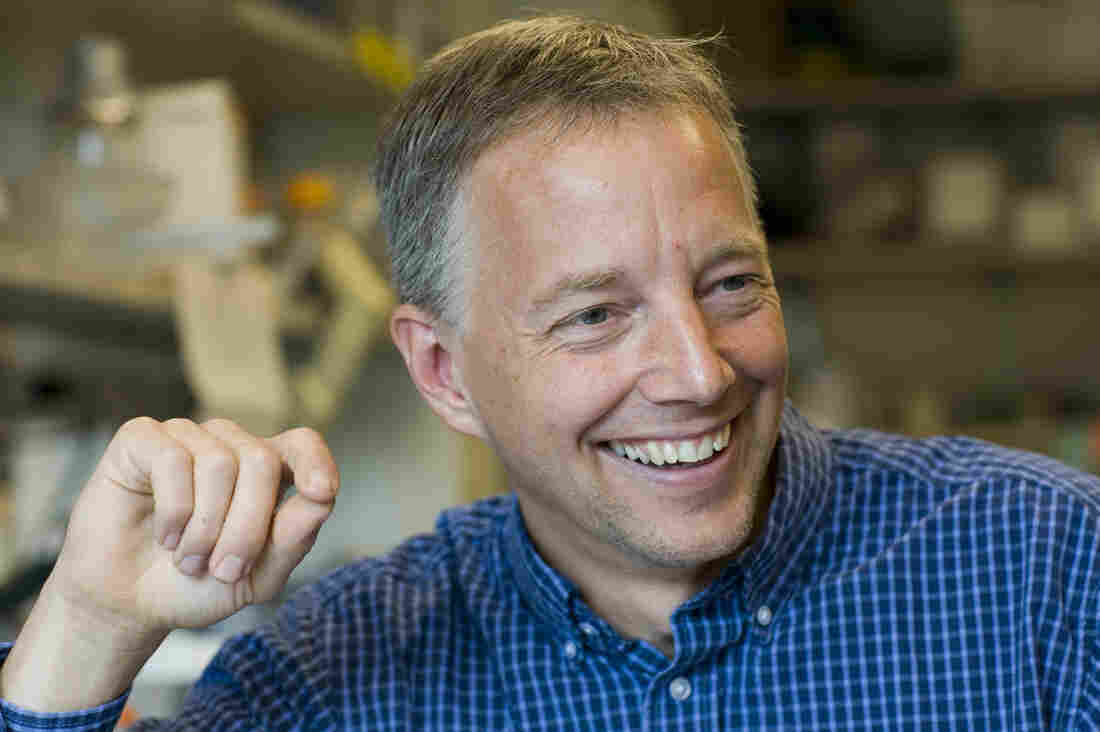 Perhaps one of the most uncomfortable things a doctor has to tell patients is that their medical problems are iatrogenic. What that means is they were caused by a doctor in the course of the treatment.

Sometime these iatrogenic injuries are accidental. But sometimes, because of the limits of medical technology, they can be inevitable. Now, a medical researcher in Seattle thinks he has a way to eliminate some of the inevitable ones.

James Olson is a physician at the Seattle Children's Hospital, where he primarily takes care of kids with brain cancer. He's also a cancer researcher at the Fred Hutchinson Cancer Research Center in Seattle.

MRI reveals the location of a brain tumor. But it's one thing to see the tumor in a scan, quite another to find the tumor in a living brain. Olson says that today, surgeons splay open the brain in an effort to find exactly where the tumor is.

Just doing that can cause problems. And the surgeons can't always tell tumor cells from healthy brain cells, so inevitably the thorough doctors remove some healthy cells too.

The result is that many times a patient's tumors are successfully removed, but the child is left with movement problems or memory problems or vision problems.

About a decade ago, Olson set out on a search for a something that would make it easier for surgeons to find and remove tumors. What he came up with was a product he calls Tumor Paint. 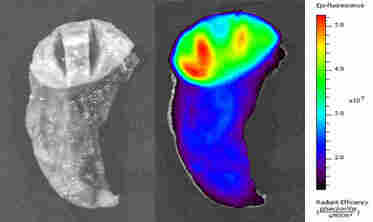 The image on the left is a piece of lung tissue that contains a tumor viewed under normal white light. The right image shows the same piece of tissue after Tumor Paint has been applied. Here it's viewed under infrared light. Areas that are more red and yellow show a concentration of the paint, which means they are more likely to be cancerous. Courtesy of Julie Novak/Blaze Bioscience hide caption

Tumor Paint is a molecule that consists of two parts. One is a chlorotoxin, a kind of protein that can attach itself to chloride channels on a cell surface. The other is a dye that will fluoresce when you shine a light on it.

It turns out the chlorotoxin in Tumor Paint particularly likes the chloride channels on the surface of tumor cells. So if you inject the paint into a cancer patient's bloodstream, it will attach itself to the tumor.

This means the tumor can be made to glow during surgery, making it easier for the surgeon to find and remove. It should also make less invasive surgery possible. (Here's a short video about how Tumor Paint might work.)

"We think that Tumor Paint might allow surgeons eventually to do a keyhole surgery like you would do for fixing a knee or for removing an appendix," says Olson. "We think they won't have to split the brain open and retract it," he says, thereby eliminating many of the iatrogenic injuries.

One piquant aspect of this new approach: The chlorotoxin in the paint was derived from scorpion venom.

The first tests of the experimental product in human patients are set for later this year.

Olson's isn't the only approach to making tumors light up during surgery. Investigators in Germany have a method of making ovarian cancers glow during surgery. Other researchers in San Diego have used antibodies to a molecule that is on the surface of gastrointestinal tumors to make them glow.

And David W. Roberts, a surgery professor at Dartmouth's Geisel School of Medicine, says he and several others are testing the naturally fluorescent compound 5-aminolevulinic acid (5-ALA), which attaches itself to glial tumors. Roberts sees a bright future for these new imaging techniques that can be done during surgery. "It's a hot field," he says.