Accessibility links
For-Profit Online Insurance Brokers Gear Up To Sell Obamacare : Shots - Health News For online insurance brokers, selling health insurance through the Affordable Care Act presents a new opportunity — and a new competitor. It's unclear who will come out ahead: the businesses, with more experience, or the feds, who won't charge commissions. 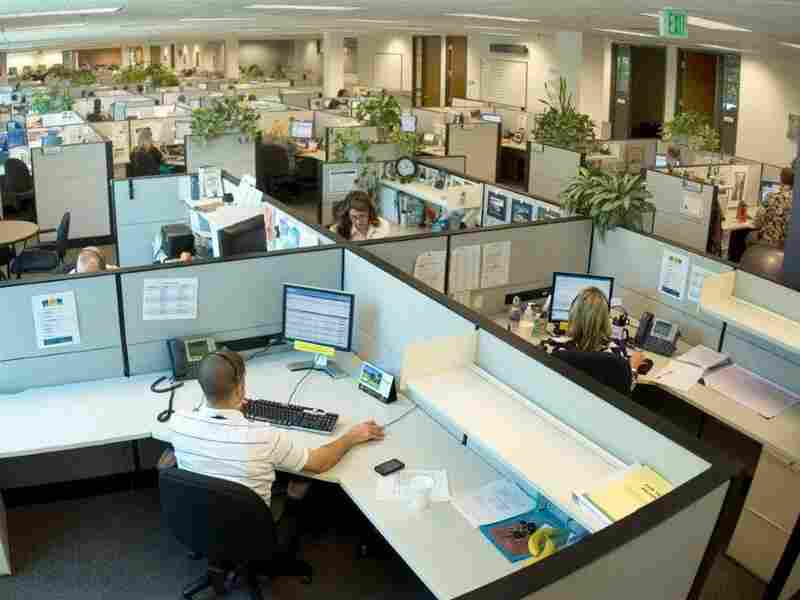 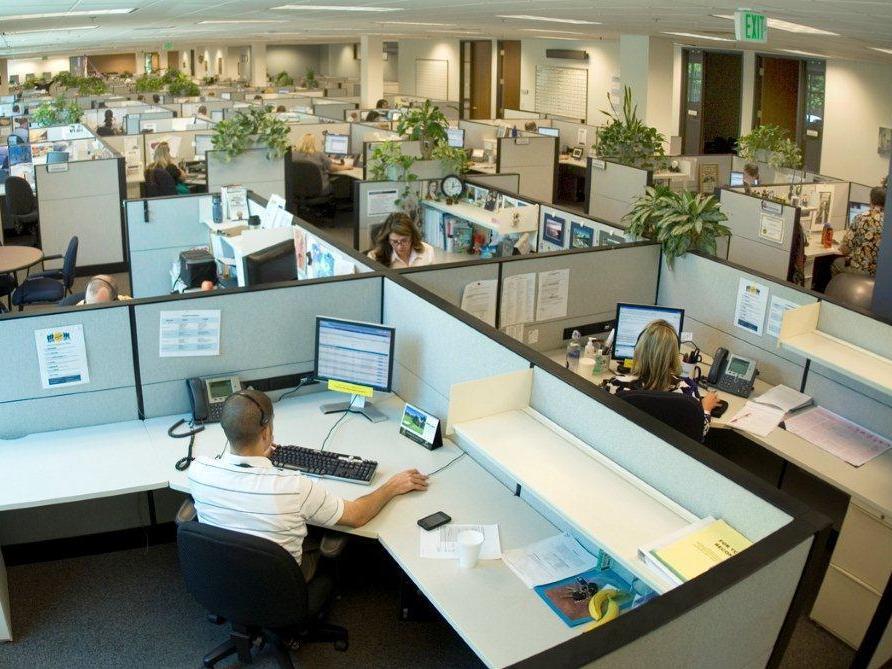 Workers at the eHealth call center outside Sacramento, Calif., get ready to sell health insurance through the marketplaces created under the federal health care law. Sales start Oct. 1.

When the Affordable Care Act was working its way through Congress, Gary Lauer was nervous. Part of the bill sounded grim. It said people could buy required health coverage online, but only through websites run by state and federal governments.

"That was going to pretty much delete us from the landscape," he says.

That's because his company, eHealth Inc., is the country's biggest online health insurance broker. If he could work with the government, the new requirement for Americans to buy health insurance sounded great. And subsidies would help lower-income people afford the product he sells.

So Lauer made dozens of flights between Silicon Valley and Washington, D.C., lobbying for access to the new market. This summer he got it. The federal government agreed to allow eHealth and five other online brokers to sell plans in the new subsidized marketplaces.

The White House's point person for signing up as many people as possible for health coverage, Marilyn Tavenner, says the government is going to need help.

"It's one more avenue for individuals to access coverage to health insurance. Agents and brokers do a tremendous amount of work, so to that extent they're valued partners and we want to work with them," she says.

Lauer is happy to be a partner. But there's a new rub: He's also competing with the federal government, which is running online health insurance markets in 34 states. And he's at a disadvantage.

For starters, the company has yet to sell a single policy on the new marketplaces, since they don't open until Oct. 1. Second, insurance companies pay eHealth a commission for each policy it sells as a result of listings on its website. The federal government's websites won't charge insurers this commission.

Steve Halper, an analyst with Lazard Capital Markets in New York, says he thinks insurance companies are going to keep paying eHealth to market their products, even if they can get the same service free of charge from the federal government.

"The insurance companies view eHealth as an effective vehicle for distribution," he says. "That's why they're willing to pay the commission. Nobody really knows if the federal exchange on its own will be as effective as eHealth."

Insurance companies need customers and want as many young and healthy ones as they can get. Halper says health insurance is a complicated product to sell. People don't go online shopping for it for fun like they do for shoes or cars or new TVs, and eHealth has expertise in taking customers all the way from window shopping to closing a sale.

"Only around 50 or 60 percent of applicants actually complete the process; eHealthInsurance can help. That's the value," Lauer says.

The company has spent over $100 million cultivating its online marketplace since 1999 and investing in customer service.

Carrie McClean manages the company's call center outside Sacramento, Calif. Video screens mounted on walls periodically display a countdown of the number of days until Obamacare enrollment opens Oct. 1, and her people are preparing.

"There are certifications that they need to take for the federal exchange and things like that. So that's what we're planning and getting ready for right now," she says.

Lauer thinks his company will be ready.

"This is new for government. Government is going into the e-commerce business, it's as simple as that," he says. "But e-commerce is not simple. It's very complex; it's very fast-moving. Consumers are very aware, and they're very demanding."

He says 20 percent of eHealth's traffic now comes through mobile devices. And it works very hard at staying at the top of Internet search engine results.

Market analyst Halper says eHealth's success or failure hangs on whether the federal health care law will work as advertised and actually create millions of new customers for the insurance industry.

"I'm not betting on anybody," Halper says. "The problem with trying to forecast the outcome is that you really don't know how many people are actually going to buy insurance in 2014."

The White House has set a goal of enrolling 7 million Americans in the new health coverage for next year. And that's contingent on a complicated mix of politics, technology and market behavior all going its way.

The story is part of a collaboration between NPR and Kaiser Health News.