Accessibility links
How A Pregnant Woman's Choices Could Shape A Child's Health : Shots - Health News Pregnant women are told not to drink, smoke or stress out. But it hasn't been clear how those choices may affect a fetus. By studying how genes are turned on and off, scientists say they are getting closer to understanding what experiences in the womb really affect a child's health. 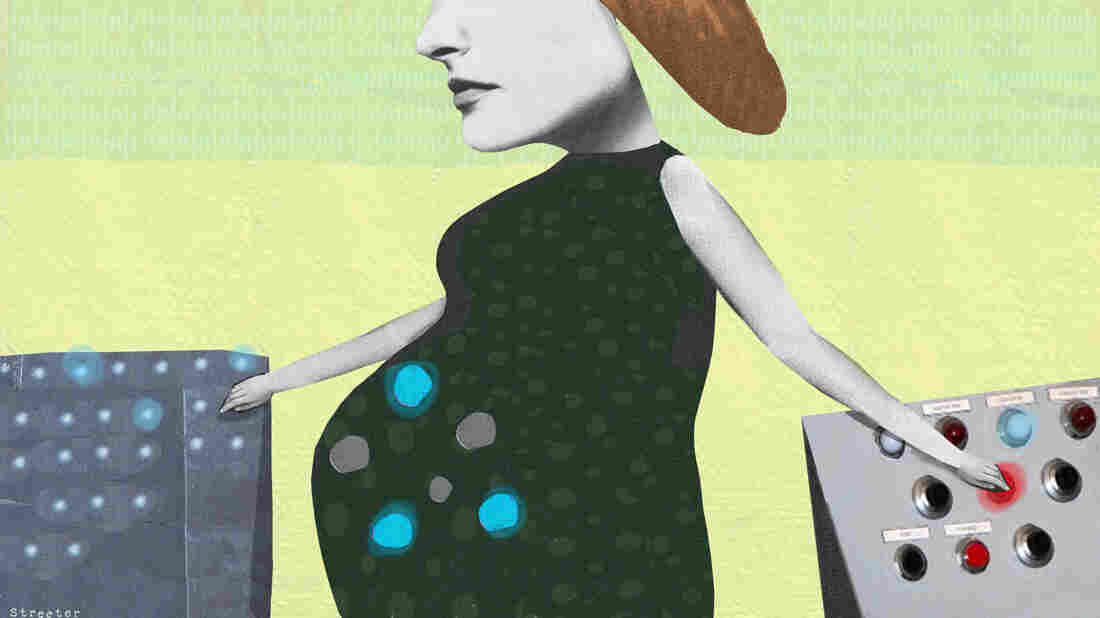 Does a glass or two of wine during pregnancy really increase the child's health risks? Epigenetics may help scientists figure that out. Katherine Streeter for NPR hide caption

Does a glass or two of wine during pregnancy really increase the child's health risks? Epigenetics may help scientists figure that out.

Pregnant women hear a lot about things they should avoid: alcohol, tobacco, chemical exposures, stress. All of those have the potential to affect a developing fetus. And now scientists are beginning to understand why.

One important factor, they say, is something called epigenetics, which involves the mechanisms that turn individual genes on and off in a cell.

There's growing evidence that epigenetics is critical in determining a child's risk of developing problems ranging from autism to diabetes, says Dani Fallin, who studies the genetics of mental disorders at Johns Hopkins Bloomberg School of Public Health.

Epigenetic control of genes is part of what allows a tiny cluster of identical cells in the womb to grow into a fully formed baby. By switching certain genes on and off, some cells become heart cells while others become brain cells.

It's a delicate process that can be disrupted by exposure to certain chemicals or hormones, says Susan Kay Murphy, an associate professor of obstetrics and gynecology at Duke University School of Medicine. And the first week or so after conception appears to be "a particularly vulnerable time where environmental influences can directly affect an epigenetic outcome," she says.

Murphy's interest in epigenetics is personal as well as professional. She entered the field in the 1990s after her young son died from a rare form of liver cancer that has been linked to epigenetic changes. She also has a son with autism and a daughter with ADHD.

Pregnant? It's OK To Have A Glass Of Wine*

Much of what's known about the epigenetics of pregnancy comes from experiments with mice, specifically a group of genetically identical agouti mice. When these mice are exposed to certain chemicals or put on a special diet during pregnancy, it switches on the agouti gene in their offspring. That causes the pups to produce a lot of agouti protein, which turns their fur a striking yellow.

The agouti protein also prevents these mice from feeling full, no matter how much they eat, Murphy says. "So they become very obese and are predisposed to developing diabetes and cancer," she says

To learn whether something like that can happen in people, Murphy has been doing a study that looks at how a mother's environmental exposures and nutrition during pregnancy may be causing epigenetic changes in babies.

The study has already produced some interesting results involving folic acid, a vitamin many pregnant women take to reduce the risk of problems like spina bifida. "At the recommended levels, it's beneficial," Murphy says. "At very high levels you actually lose that benefit."

But the results of epigenetic changes don't necessarily appear at birth or even during childhood. That's because things that affect development very early in life can show up decades later, she says.

"If you think of development as a ball rolling down a creviced hill, there are many different paths that ball can take," Fallin says. "And epigenetic mechanisms may help shape that path."

So what happens in the womb may cause epigenetic changes that contribute to schizophrenia or diabetes decades later, she says.

Fallin is particularly interested in early developmental paths that can lead to autism. So she did a study looking at epigenetic information in the brain cells of children with autism and neurotypical kids.

"At specific places, we see differences in the brains from the autistic children," she says. "That's important because those particular genes may give us a clue about what's being turned on and off differently in autistic children."

A complete epigenetic explanation of autism or any other disease is a long way off, Fallin says. But in the meantime, epigenetic studies may help get the attention of pregnant women who would otherwise ignore recommendations about diet and behavior.

Fallin has two children, and she hopes that epigenetic evidence will eventually make it clearer how much exposure is a problem during pregnancy. She says that might finally settle the question of whether it's OK for a pregnant woman to have a glass of wine with dinner.