Accessibility links
Repeated Bone Scans Shed Little Light On Fracture Risk : Shots - Health News Many older women get bone scans every two years to look for signs of osteoporosis. But for the vast majority of people, the repeat scans don't detect significant changes. New research suggests it may make sense to stop or slow down on the scans after people have had an initial test. 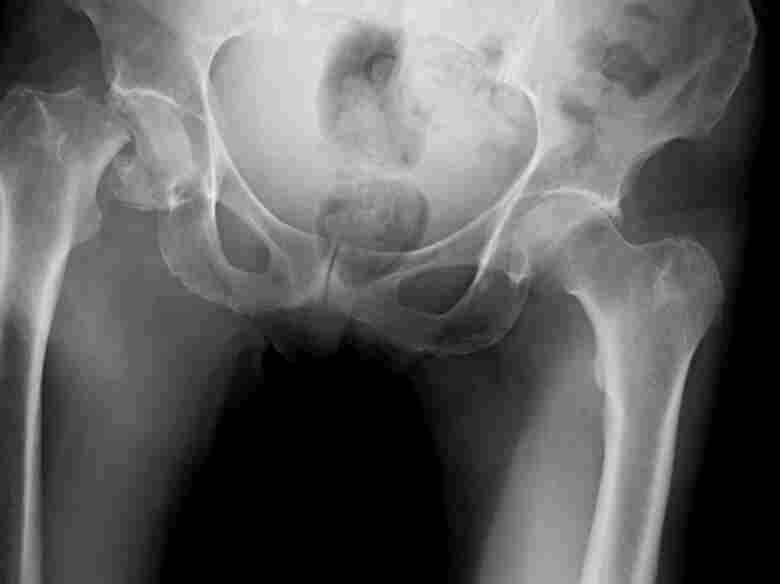 A broken hip like the one at left is a big health worry for older women. iStockphoto.com hide caption

Many women have heard that they should be concerned about bone health as they age because there's a risk for crippling fractures.

But repeated bone scans that are supposed to help assess the risk do a crummy job of predicting who's actually going to break a bone.

That's the gist of a study of 802 women and men who are part of the ongoing Framingham Heart Study. They were screened for osteoporosis in 1987 and again in 1999. Most were in their 70s.

In almost all the people, there was very little difference between the two scans, with bone density dropping less than 1 percent a year over about a decade.

The repeat scans correctly flagged the people at most risk and who later broke a hip just 4 percent of the time.

One baseline bone-mineral density test should be enough to identify people with osteoporosis, the researchers say. And they add that it might be time to chuck the common practice of recommending bone scans every two years for older women, given the cost and effort required. The findings were published online in JAMA, the Journal of the American Medical Association.

The study jibes with another study published last year in the New England Journal of Medicine. Those researchers also found that older women's bone density doesn't change quickly, in many cases showing no significant decline for 15 years.

How A Bone Disease Grew To Fit The Prescription

Fractures are a serious health concern for people with osteoporosis. An old person with a broken hip is four times more likely to die within three months, because immobility can lead to pneumonia and other life-threatening infections.

Each year 1.5 million people have a fracture from osteoporosis, according to a 2012 surgeon general's report.

Bone density is usually tested with a specialized X-ray machine that measures bone density in the hip and spine, commonly called a DEXA or DXA test. A scan costs about $200. Medicare pays for scans every two years, regardless of a person's bone density, and 22 percent of Medicare beneficiaries get a repeat scan within three years.

But Grandma shouldn't be the only one worried about prevention. Bone loss starts in the mid-30s for both men and women. Women's bone loss accelerates in the years right after menopause and then typically plateaus.

Weight-bearing exercise like walking helps preserve bone density, as does eating calcium-rich foods. People with osteoporosis are sometimes prescribed medication, but there's controversy over who should be medicated and when.