Accessibility links
Vaccine Refusals Fueled California's Whooping Cough Epidemic : Shots - Health News The whooping cough vaccine isn't perfect, but public health officials suspected that something else contributed to the 2010 pertussis outbreak in California. A study finds that neighborhoods where more parents filed for vaccination exemptions for their children had higher rates of infection. 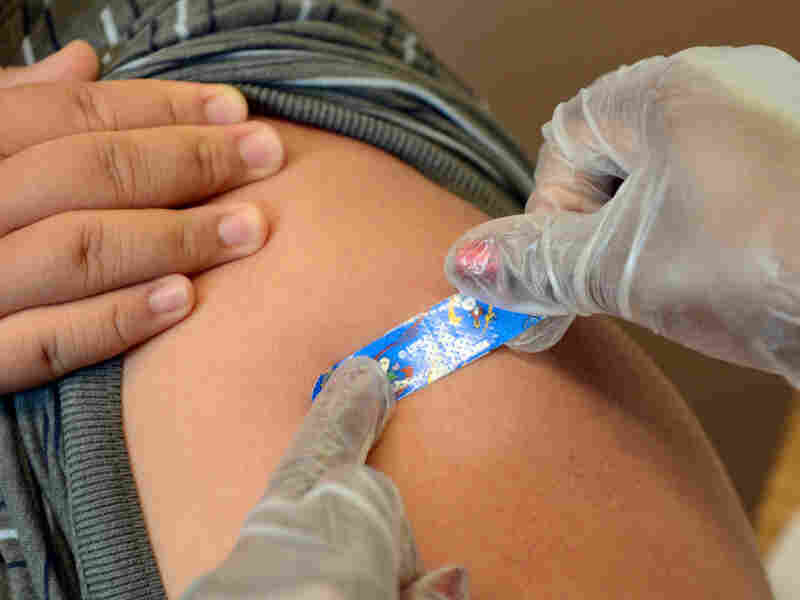 A student gets vaccinated against pertussis at a Los Angeles middle school in 2012. The state required that students be immunized to halt an epidemic of whooping cough. Kevork Djansezian/Getty Images hide caption

When the whooping cough vaccine was invented in the 1940s, doctors thought they had finally licked the illness, which is especially dangerous for babies. But then it came roaring back.

In 2010, a whooping cough outbreak in California sickened 9,120 people, more than in any year since 1947. Ten infants died; babies are too young to be vaccinated.

Public health officials suspected that the increased numbers of parents who refused to vaccinate their children played a role, but they couldn't be sure.

Vaccine refusal was indeed a factor, researchers now say. They compared the location and number of whooping cough, or pertussis, cases in that outbreak with the personal belief exemptions filed by parents who chose not to vaccinate for reasons other than a child's health. (Some children with compromised immune systems aren't able to be vaccinated.)

Pertussis is very contagious, spreading quickly through a community. So the researchers had to map not only the location of outbreak clusters, but also when they appeared.

They found that people who lived in areas with high rates of personal belief exemptions were 2 1/2 times more likely to live in a place with lots of pertussis cases. "The exemptions clustered spatially and were associated with clusters of cases," Jessica Atwell, a graduate student at Johns Hopkins Bloomberg School of Public Health and lead author on the study, told Shots. It was published online in the journal Pediatrics.

Both exemptions and clusters of pertussis cases tended to be in neighborhoods with higher levels of education and income. Statewide about 2 percent of parents file an exemption, but the number varied hugely from one community to the text. In some schools more than three-quarters of the families filed exemptions.

When the number of people vaccinated drops below 95 percent, a community loses herd immunity to highly contagious germs like pertussis, and babies and other unvaccinated people can get sick. In 2010, 91 percent of kindergarteners were up to date on their shots in California.

Vaccine refusal wasn't the only factor fueling the California outbreak. Pertussis is a cyclical disease. Protection from the current version of pertussis vaccine appears to fade more quickly than doctors originally thought, so many older children vaccinated as youngsters were no longer immune to the bacterium. And many adults had never gotten a booster.

Finally, this study couldn't tell if the parents who filed exemptions had vaccinated their children against some diseases, or which ones.

California has since launched a statewide campaign to get both children and adults vaccinated, with a booster required for attendance at middle school. But parents can still file for personal belief exemptions, and they do.