Accessibility links
A DEET-Like Mosquito Spray That Smells Like Jasmine Or Grapes? : Shots - Health News Scientists have figured out how DEET repels mosquitoes. The finding has led the researchers to candidate repellents that are safer and cheaper than DEET and may provide new weapons against mosquito-borne scourges, such as malaria and dengue fever. 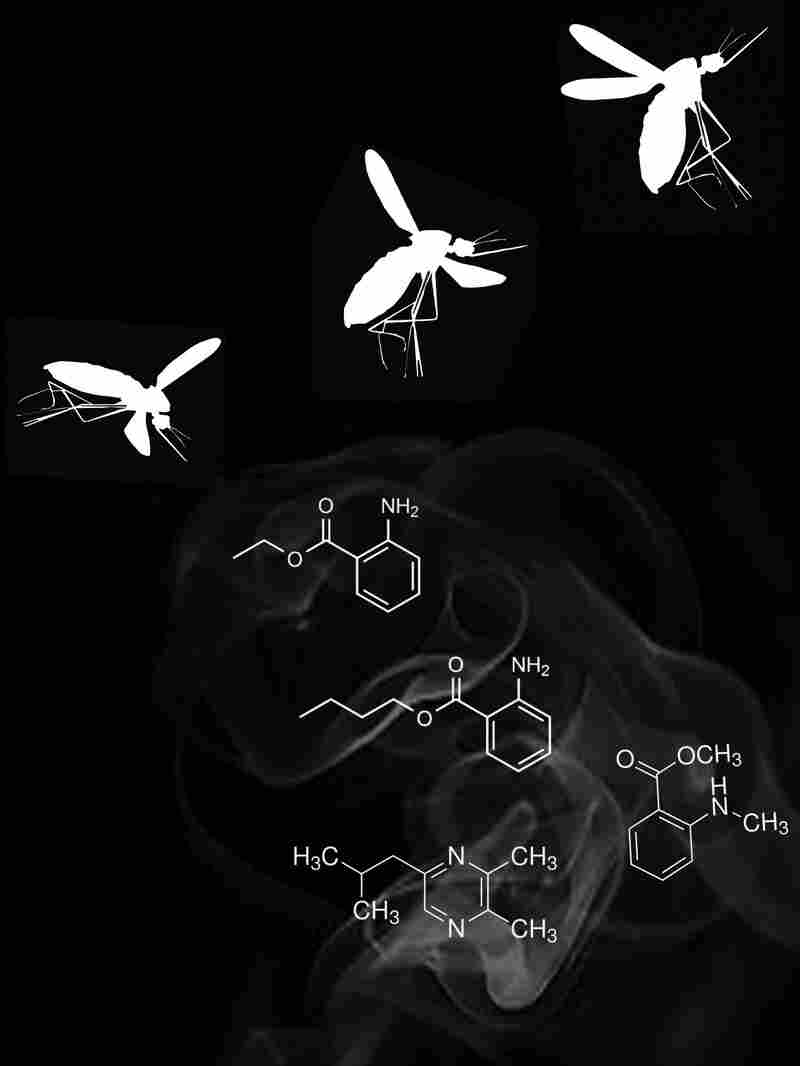 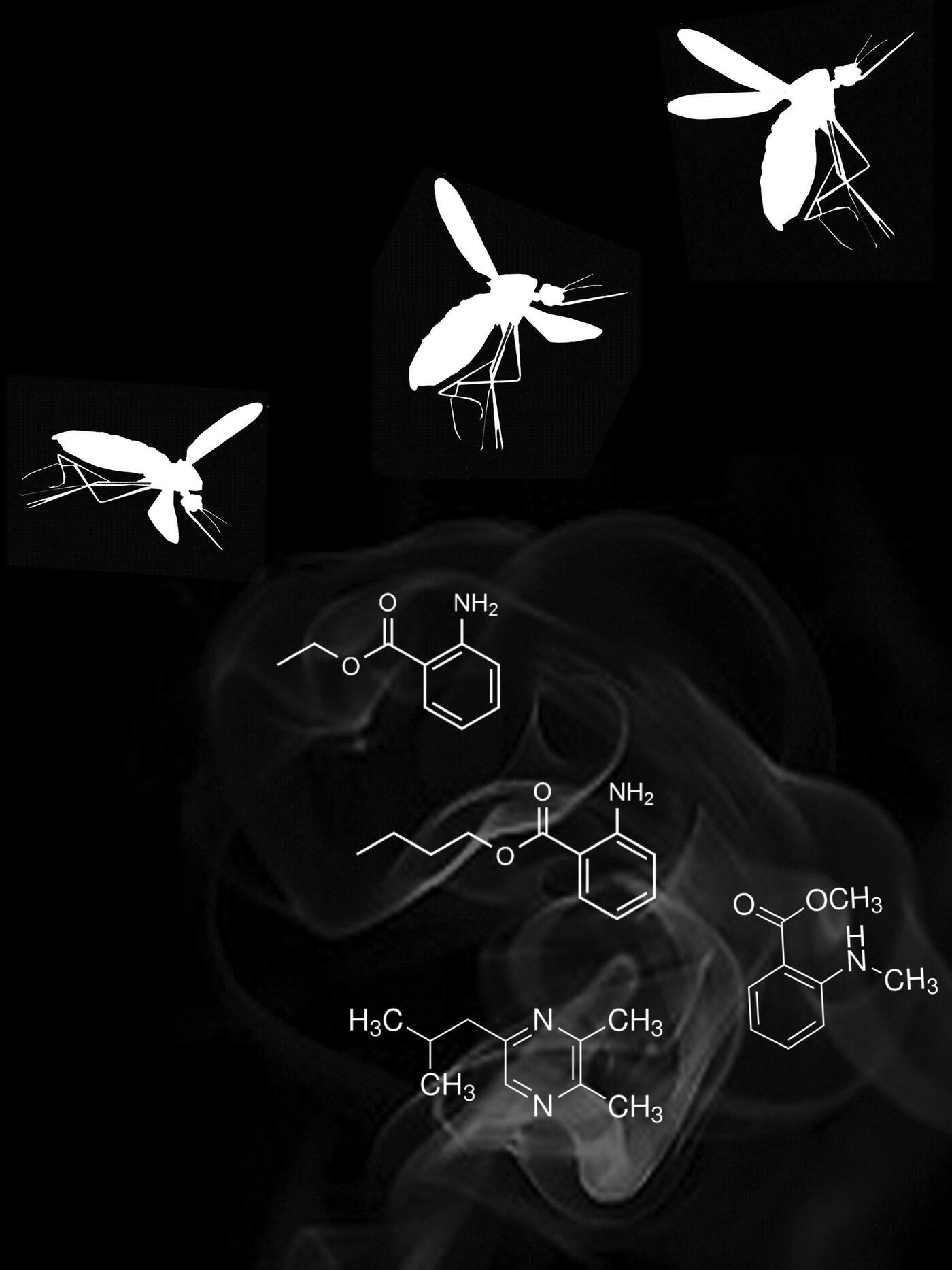 Scientists have discovered four new DEET-like mosquito repellents. Three of them are safe to eat.

California scientists are reporting a pair of victories in the epic struggle between man and mosquito.

A team at the University of California, Riverside, appears to have finally figured out how bugs detect the insect repellent known as DEET. And the team used its discovery to identify several chemical compounds that promise to be safer and cheaper than DEET, according to the report in the journal Nature.

The new repellents, if they pan out, could make a huge difference in developing countries where mosquito-borne diseases such as malaria and dengue fever are common, says Craig Montell, a researcher at the University of California, Santa Barbara, who is not connected to the new research.

DEET alternatives also could mean that people in the U.S. "can have a pleasant picnic on a pleasant summer afternoon in our backyards without getting eaten alive by mosquitoes," Montell says.

Though effective, DEET is too expensive for many people in developing countries, says Anandasankar Ray, who led the study. Also, he says, consumers have to be careful how they use the repellent. It can dissolve plastics, including nylon.

Even so, DEET has been the gold-standard bug repellent since the U.S. Army developed it in the 1940s, Ray says, despite many efforts to find something better. "The main reason why scientists haven't been able to improve upon DEET is because they just didn't know how DEET is detected by the insects," he says.

Now, it appears, they do know, thanks to experiments with some genetically modified fruit flies in Ray's lab. These custom-made flies have special nerve cells in their antennae that glow a fluorescent green when they react to DEET, Ray says.

Researchers exposed the flies to the repellent. Then, Ray says, a scientist named Pinky Kain examined the flies' antennae under a microscope. "When Pinky found the neurons that were fluorescing green, she came running into the lab in joy," Ray says.

When Pinky found the neurons that were fluorescing green, she came running into the lab in joy.

Subsequent tests suggested that the team really had found the part of a nerve cell that detects DEET and tells a bug to find a meal somewhere else. The team also showed that these nerve cells work the same way in mosquitoes as they do in fruit flies.

But Ray says the finding raised a question: "How can we leverage this finding and use it for the good of humanity?" The answer came from another researcher in Ray's lab, who figured out how to use the new information about DEET detection in insects to screen a half-million chemical compounds.

The screening process turned up fewer than 200 compounds likely to repel insects. From this group, Ray and his team picked three that are already approved by the Food and Drug Administration as food additives. "One of them is present in plum," he says. "The other is present in orange and jasmine oil. Some of them are present in grapes. And, as you can imagine, they smell really nice."

Herbs And Empires: A Brief, Animated History Of Malaria Drugs

Why Mosquitoes Love Me, And Other Mysteries Revealed

The compounds are cheap, safe enough to eat and don't dissolve plastic the way DEET does, Ray says. And like DEET, he says, they keep mosquitoes away.

The team members proved this by putting on a special glove and placing their arms in a cage filled with hungry insects. Ray says the glove has a window in it that is covered with netting. "When we offer our arms, mosquitoes are really excited," he says. "They sit on the netting and try their level best to probe. However, when we treat the net with one of these repellent compounds, the mosquitoes are no longer attracted."

The new research is a tour de force, Montell says, and could point the way to better and safer repellents. "Although DEET is not highly toxic, it's not completely safe either," he says. "And the particular repellents they found seem like they're safer than DEET."

For Ray, who grew up in India, the finding represents an important victory over mosquitoes. "I have suffered from malaria in my youth," Ray says. "My wife was in hospital with dengue for nearly a week. And so I have a personal score to settle with them."