Accessibility links
First Malaria Vaccine Moves A Step Closer To Approval : Shots - Health News A decades-long effort to prevent one of the world's leading scourges has resulted in a vaccine with only modest efficacy. Still, the shot has the potential to save hundreds of thousands of lives each year. So its developers are seeking regulatory approval in 2014. 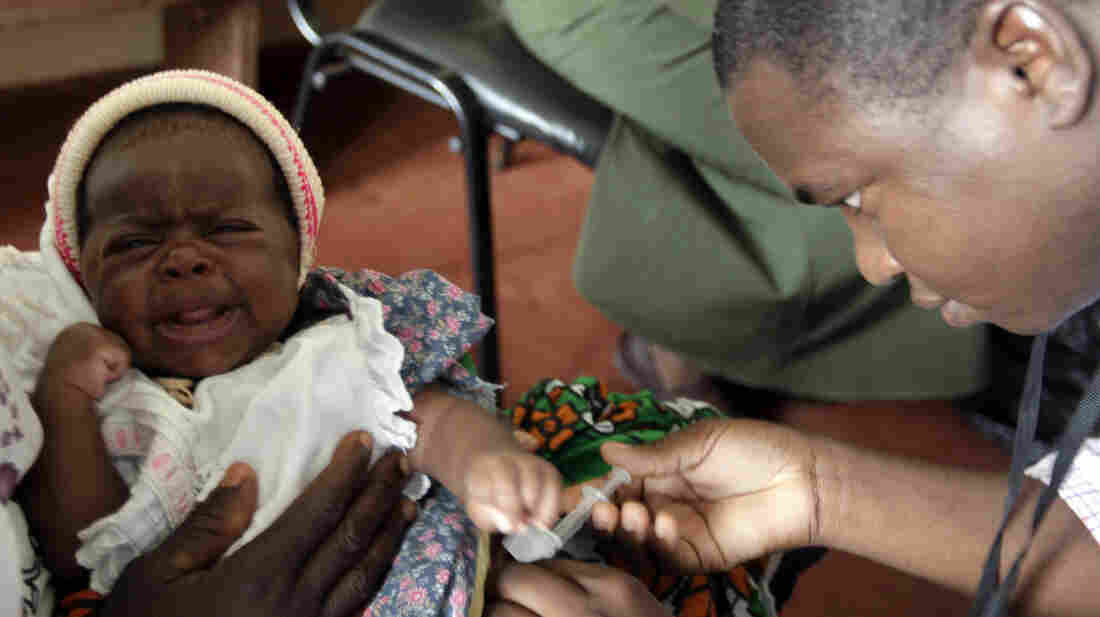 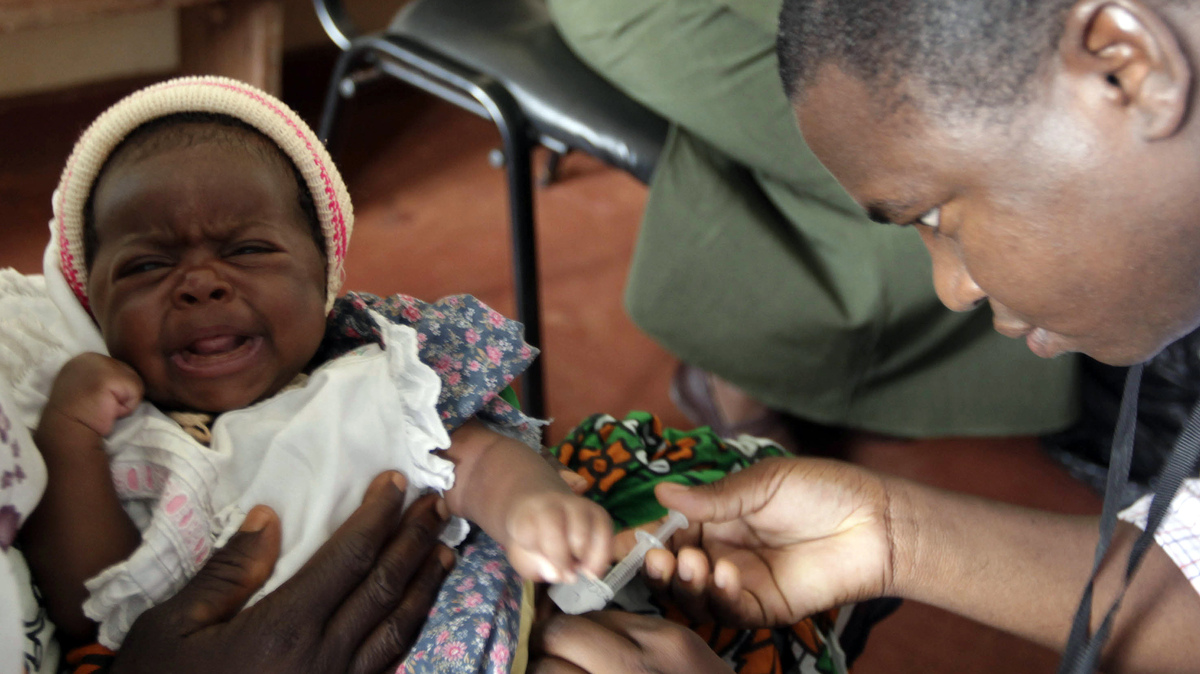 A health worker administers the malaria vaccine at a clinical trial in Kilifi, Kenya.

A malaria vaccine studied in more than 15,000 African children has been found to reduce the number of cases of disease by 27 to 46 percent.

That's only modest efficacy compared to most accepted vaccines. But this would be the first anti-malarial immunization on the market, and its developers emphasize that it still prevents a lot of cases. Its main sponsor, GlaxoSmithKline, says it's good enough to justify seeking regulatory approval in 2014.

Specifically, for every 1,000 toddlers who had the three-dose vaccination, there were 941 fewer cases of malaria over the following 18 months. Those who didn't get the vaccine had 1,800 cases per 1,000 children — a rate reflecting the fact that most of them suffer more than one case a year.

Preventing 941 cases for every 1,000 young children vaccinated "suggests that it has potential for a pretty big public health impact," says Dr. David Kaslow of the PATH Malaria Vaccine Initiative, one of the study's sponsors. "Those are some pretty big numbers of cases averted."

But Dr. Moncef Slaoui, chief of vaccine development at GlaxoSmithKline, says even a vaccine of modest effectiveness can have a big impact because malaria is such a monumental problem in Africa.

"Malaria in sub-Saharan Africa kills around 600,000 children every year, which is an enormous number," Slaoui tells Shots. He's been working on the RTS,S vaccine for nearly 30 years.

The African study, which involves 11 sites in seven countries, couldn't demonstrate the vaccine's impact on malaria deaths. That's because children in the study all got the very best treatment, so very few died of the disease. But those who got the vaccine were 36 percent less likely than those who didn't to get severe malaria, which often results in death for many victims.

Still, malaria specialists acknowledge that it's not going to be easy to decide how to use the RTS,S vaccine.

The new data show that 18 months after vaccination, it's 46 percent effective in preventing illness in children immunized between 5 months and 17 months of age. For infants younger than that, it was only 27 percent effective. Those efficacy rates are somewhat lower than shorter-term results presented last year, indicating that the protection falls off a bit over time.

Work is underway to see if a booster shot can strengthen that protection.

"There's no question that everybody would want a higher efficacy on this vaccine," says Dr. Johanna Daily of Albert Einstein College of Medicine. Standard vaccines against other diseases have over 80 percent, sometimes 90 percent, efficacy, she says. "But malaria has always been such a challenge. And we may not ever get those levels."

Even when people actually catch malaria — the most effective, though undesirable, form of immunization — protection against future infection is far from complete.

"It's hard to improve upon nature," Daily says. "So perhaps ... a more efficacious vaccine is unlikely, and therefore [RTS,S] would be the thing to go with."

Meanwhile, if the World Health Organization gives the green light to the Glaxo vaccine, it's going to have to compete for scarce public health funds with other malaria-prevention measures, such as insecticide-treated bed nets to keep malaria-infected mosquitoes away from sleeping children.

Figuring out the vaccine's role in malaria prevention is "going to be a very tough question," Daily says.

Glaxo has pledged to keep the cost of the vaccine low — no more than the cost of production plus a 5 percent profit that the company says it will devote to developing other vaccines against neglected diseases. Slaoui says RTS,S won't be pennies per dose. Most likely, it'll be a few dollars.