Accessibility links
Shifting Resources To Front Lines Could Protect Polio Workers : Shots - Health News Bombs targeting polio vaccinators have threatened the global effort to stamp out the disease once and for all. The attacks are likely to continue, researchers warned, unless there's a change in eradication strategy toward local action. 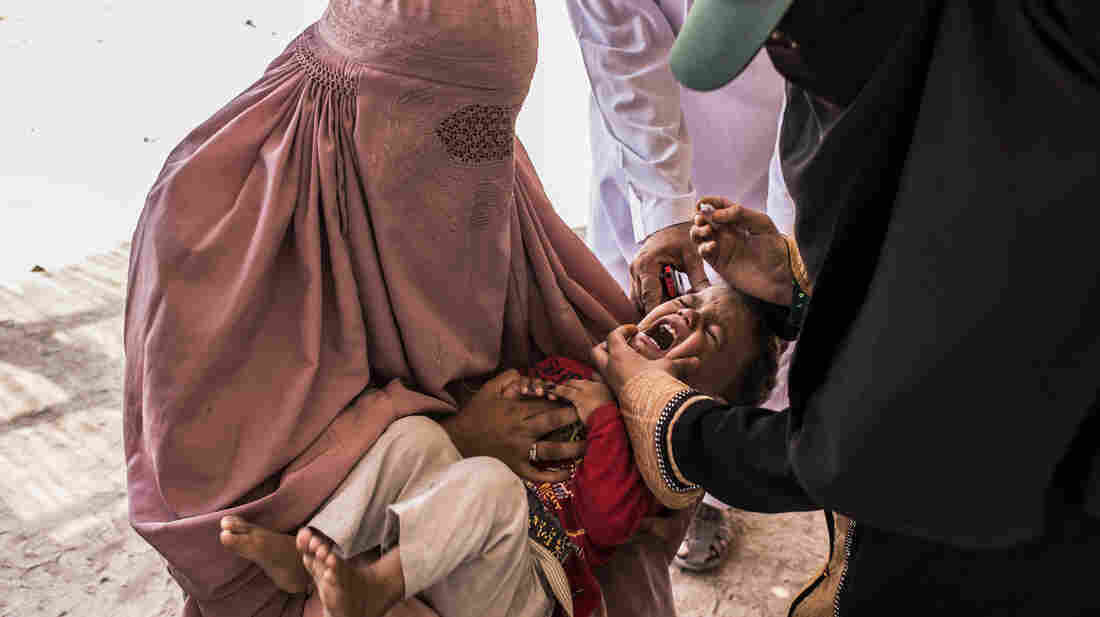 Avez, 2, is held by his mother, as he receives the polio vaccine in the Khyber Tribal Region in northwest Pakistan. Daniel Berehulak/Getty Images hide caption 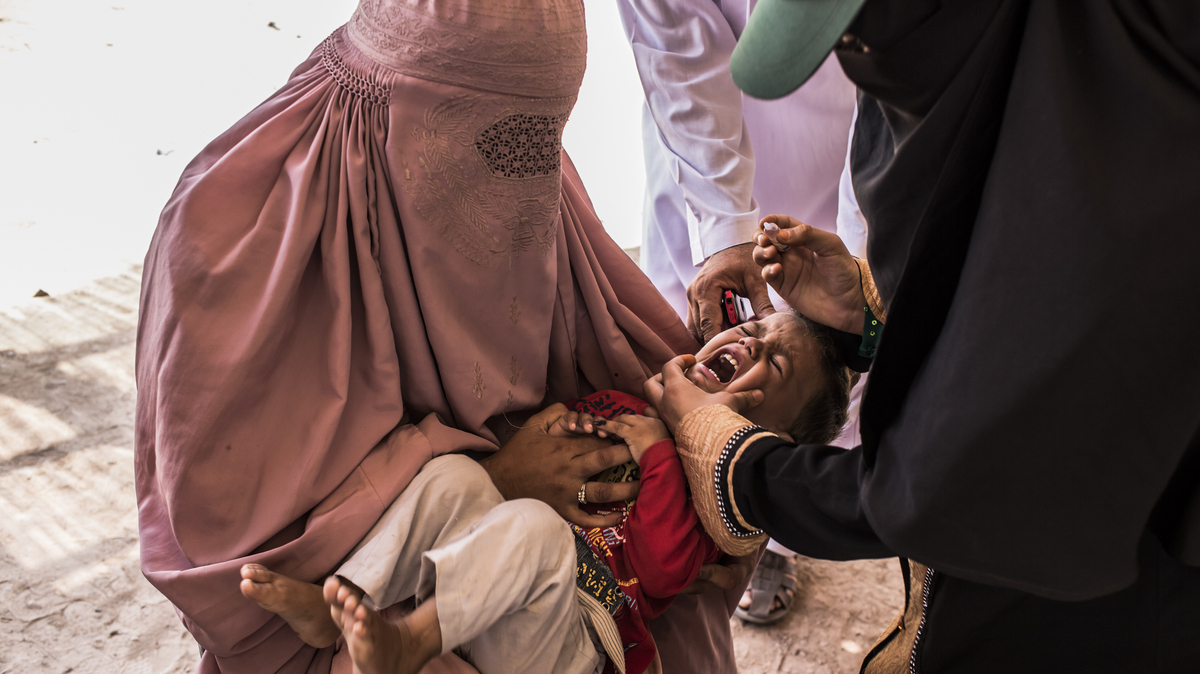 Avez, 2, is held by his mother, as he receives the polio vaccine in the Khyber Tribal Region in northwest Pakistan.

A bomb exploded Monday near a group of polio vaccinators in Peshawar, killing at least two policemen, The New York Times reported. Since December, at least 20 polio workers have been killed in similar assaults.

Such violence has threatened the global effort to stamp out the disease in the three countries where the virus is still endemic — Afghanistan, Nigeria and Pakistan.

To Keep Polio At Bay, Israel Revaccinates A Million Kids

In a pair of commentaries, researchers from Afghanistan, Nigeria and Pakistan call for a shift in where money and resources for polio eradication are focused.

Instead of promoting the polio vaccine through high-profile leaders and politicians, they write, these countries need to build up and empower the community health workers. Usually women, these workers go door to door to administer vaccine and other basic health services.

Otherwise, terrorist groups, like al-Qaida in Pakistan and Boko Haram in Nigeria, will continue to see attacks on polio workers as an effective war tactic against the West, Seye Abimbola and his colleagues write in the journal PLOS Medicine.

"Targeting the polio campaign is one way that terrorist groups can attract attention, not [the] least because of the large-scale advertisement campaigns run by government authorities," they write.

Many people in Nigeria and Pakistan associate the anti-polio campaign with he West, the group says. That connection has fueled distrust for the vaccine and leaders supporting it.

To reverse this trend, Abimbola and his colleague suggest integrating the polio vaccine with other basic health services, sanitation and clean water.

"There are many health issues in northern Nigeria that the people rightly consider as priority issues, but the government ... seems to concentrate on polio eradication," Abimbola writes. "This situation breeds suspicions and leads people to refuse the polio vaccine."

This sentiment is echoed by Svea Closser of Middelbury College in the U.S. and Rashid Jooma of Aga Khan University in Pakistan, who co-authored another commentary in the same issue of PLOS Medicine.

They call for putting polio vaccine drives side by side with other immunization drives. "For example, during the recent measles outbreaks in Pakistan, the polio vaccine could have been administered to millions of children ... but, as a routine practice, immunization campaigns were limited to vaccinations against measles."

Pakistan has trained more than a hundred thousand community health workers to implement these immunizations drives. These Lady Health Workers are the backbone of the health care system in Pakistan — and a critical to polio eradication, Closser and Jooma write.

But the government offers these women little support financially or politically. "Lady Health Workers are often in desperate financial straits," they write. Many earn under $2 per day while the Global Polio Eradication Initiative operates with a budget of more than a billion dollars each year.

By empowering these women and expanding their skills, communities will be more likely to embrace polio eradication as a broader health problem, Closser and Jooma argue. "Then groups, such as Boko Haram and the Taliban will have an incentive to help secure access to vaccinations as a means of winning people's support."