Accessibility links
Why Scientists Held Back Details On A Unique Botulinum Toxin : Shots - Health News Journals usually require researchers to reveal genetic sequences for a toxin that is the subject of a scientific paper. The requirement was waived for a new botulinum toxin because of security risks. 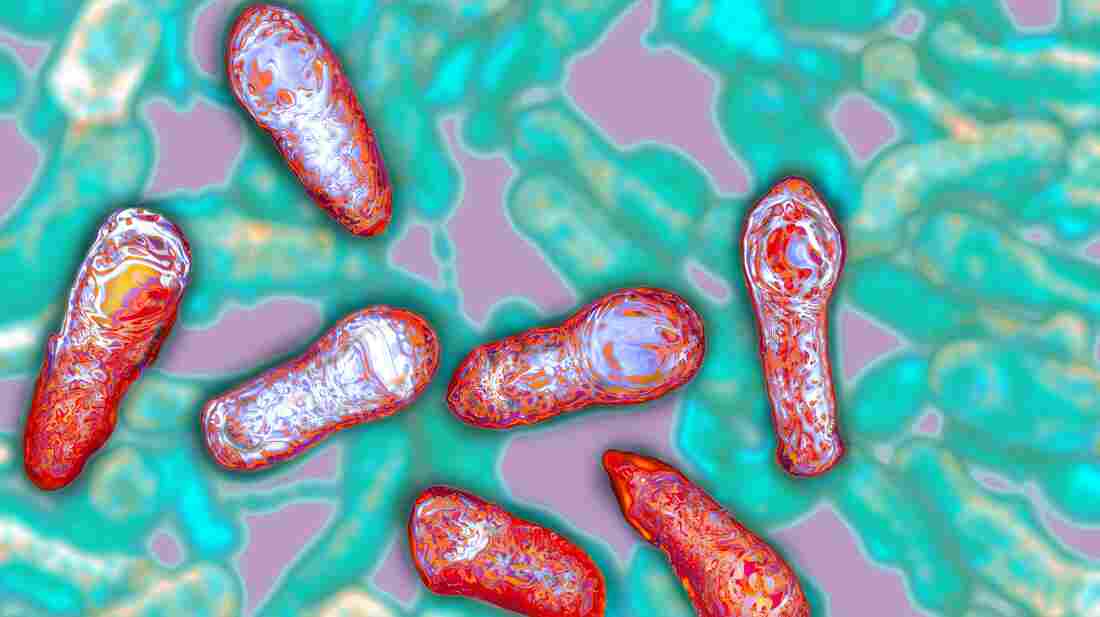 Scientists have discovered the first new form of botulinum toxin in over 40 years, but they're taking the unusual step of keeping key details about it secret.

That's because botulinum toxin is one of the most poisonous substances known. It causes botulism, and the newly identified form of it can't be neutralized by any available treatment.

The researchers published two reports describing their work online in The Journal of Infectious Diseases. The information in those reports is deliberately incomplete, to prevent anyone from using it as the recipe for a potent new bioweapon.

"This is not the usual process for publishing manuscripts. We thought in this case an exception was appropriate," says David Hooper, an infectious disease specialist at Massachusetts General Hospital who serves as one of the editors of the journal.

Normally, the journal would require that the scientists disclose the genetic sequences needed to make the toxin. In this case, however, the researchers didn't want to do that because of the security risk.

The journal's editors ultimately agreed that they could go ahead and publish but withhold the information until new treatments were developed. "There was enough scientific importance that we did not want to delay the publication," says Hooper.

Their decision comes as biologists have been grappling with how to handle potentially dangerous information.

Last year, for example, scientists and security experts had a huge argument over whether to publish the details of mutant forms of bird flu that could potentially cause a pandemic in humans.

Biology has long had a tradition of openness, to allow people to confirm research findings and build upon others' discoveries. But some worry that new technologies have made it easier for basic science to be exploited by people with evil intentions.

And any expert in botulinum toxin knows that its history as a possible bioweapon goes back decades. The Japanese cult Aum Shinrikyo even tried to release it in downtown Tokyo in the 1990s, but these attacks failed.

One scholarly article on the toxin noted that a single gram could potentially kill more than a million people, if it was evenly dispersed through the air and inhaled — although that would be difficult to do.

Botulinum toxin is normally made by bacteria, and it can cause a serious and life-threatening paralytic illness. In the U.S., botulism most commonly occurs in young infants, whose still-developing guts don't have the normal microbes that can inhibit the growth of the bacteria.

The new form of the toxin was discovered by Jason Barash and Stephen Arnon at the California Department of Public Health. They use fecal samples from babies to diagnose botulism and characterize the type of toxin that's producing the disease.

But in the newly reported case, they found a completely unexpected toxin--one that cannot be neutralized by any of the currently available anti-botulinum antiserums.

Barash and Arnon couldn't immediately be reached for comment.

"This toxin has unusual risks and consequences for human health," says David Relman, a microbiologist at Stanford University who was asked by the journal editors to weigh in on the decision to publish the incomplete manuscript. He says if this new type were deliberately misused, we would have no defense.

Relman agreed with the decision to withhold information. "I want to applaud the authors for acting in a way that I think was responsible and prudent," he tells Shots.

An editorial accompanying the report notes that the scientists consulted with numerous officials from government agencies such as the National Institute of Allergy and Infectious Diseases and the Centers for Disease Control and Prevention.

"It would seem that this process, or this consultation, was entirely an internal, within-the-government kind of consultation," says Relman.

He serves on a government advisory board called the National Science Advisory Board for Biosecurity, which is supposed to provide guidance on how to handle biological information that could be misused.

But that committee, which played an important role in the recent debate whether to publish controversial research on bird flu, apparently wasn't consulted this time around. "None of us had heard of this work until I was sent it," says Relman.

Asked if people who needed to know the information to develop counter-measures were going to be able to access it, Mass General's Hooper says, "That was our understanding, yes."

But some say that not sharing scientific work in the usual way, because of fears it could fall into the wrong hands, carries its own risks.

Ronald Atlas, a biologist and bioweapons expert at the University of Louisville in Kentucky, says he agrees with the decision in this case. "But I have real concerns about how often we would do this and what it does to the overall implication of advancement in the life sciences," he tells NPR.

He says that advancement depends on biologists being able to replicate each other's work and use that research to take the next step forward — something that's not possible if scientists and journals withhold critical details.

He notes that if this sets a precedent and biologists start withholding information that they deem too risky, that could slow down the community's ability to do things like search for new treatments. "That's the last thing you want when you're facing a public health threat," he notes.