Accessibility links
To Prevent HIV Infection, Couples Try Testing Together : Shots - Health News The majority of new HIV infections among gay men in the U.S. these days occur within committed couples. So researchers are piloting a strategy that's been successful in Africa. Gay couples in several cities have tried it and say the benefits are unexpected. 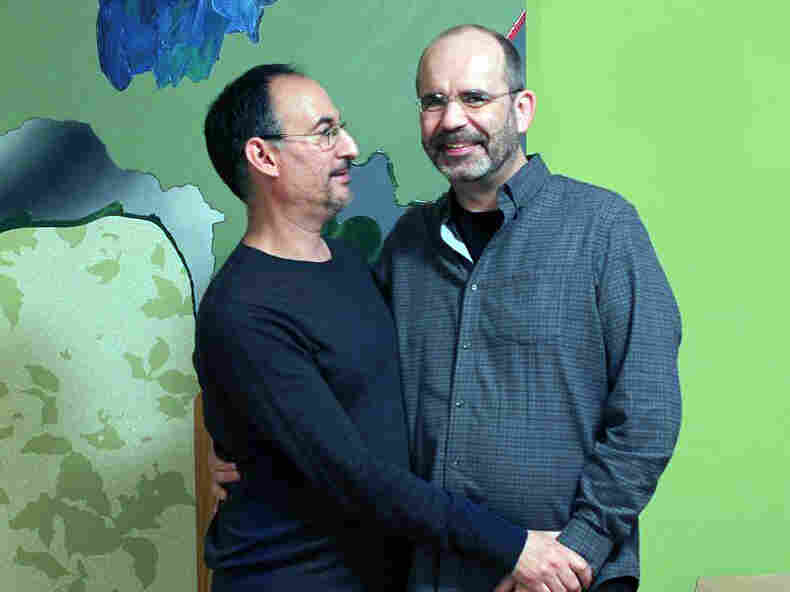 David Lozano (left) and Kevin Kreinbring stand in front of a painting created by Lozano. The couple says they get tested for HIV together every six months. Courtesy of David Lozano hide caption 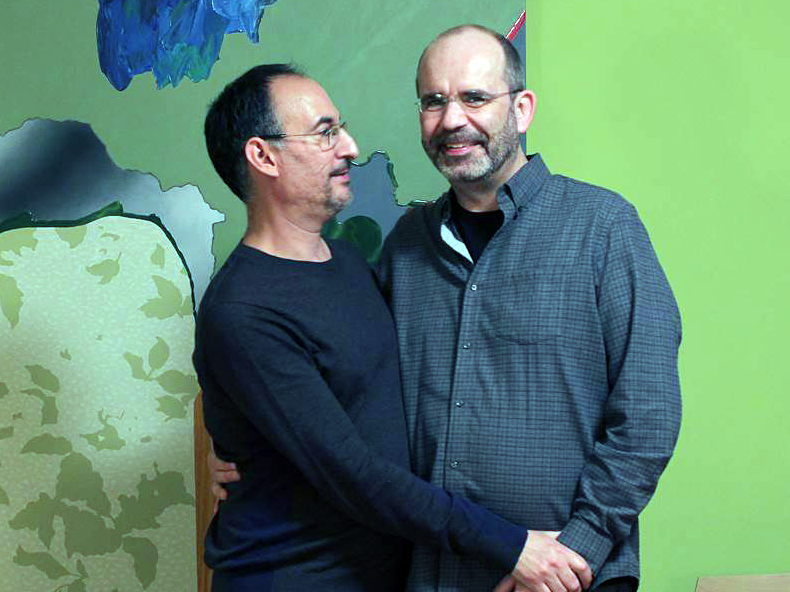 David Lozano (left) and Kevin Kreinbring stand in front of a painting created by Lozano. The couple says they get tested for HIV together every six months.

Getting tested for HIV in the U.S. is almost always private, sometimes even secretive. Ditto for disclosing the results.

But some say the approach is outmoded at a time when many at risk for HIV — gay men — are in committed relationships.

Research shows as many as two-thirds of new HIV infections among gay men these days are within committed couples. That's very different from the days when promiscuity fueled the epidemic.

The implications of this for HIV prevention are big. AIDS researcher Patrick Sullivan says what brought it home for him was the discovery that gay men in coupled relationships aren't any more likely to know each other's HIV status as those with casual sex partners.

"In our analysis, lack of awareness was pretty much the same," Sullivan tells Shots.

So Sullivan and his colleagues decided to borrow a strategy that has worked in Africa. For 20 years, heterosexual couples in Rwanda, Zambia and other countries have been encouraged to get tested for HIV together — and learn the results at the same time, from counselors who can help them deal with the information, whatever it is.

The result is a program called Testing Together. Successfully piloted in Atlanta, Chicago, Boston, San Diego and Seattle, the program is being rolled out nationally in HIV prevention programs funded by the Centers for Disease Control and Prevention.

"Couples go through the whole process together," Sullivan says. "They get pretest counseling together. Get their blood drawn together. Get the results together. And make a plan on how they're going to remain HIV-negative — or how to support an HIV-positive partner to get into care and keep the negative partner negative."

David Lozano and Kevin Kreinbring, a gay couple in Chicago, say it makes a big difference. "It's just very comforting to do this jointly," says Lozano, a 47-year-old painter and art instructor. "It kind of affirms our trust with each other. I feel like we may not get tested as frequently otherwise."

HIV Treatment Should Start Even Earlier, WHO Says

He says the couple generally get tested together every six months.

Kreinbring, a 51-year-old accountant, says some of the benefits have been unexpected. "It almost becomes an event," he tells Shots. "In a bizarre way, I almost look forward to it. It creates a lot of dialogue about things we might not talk about otherwise."

Those things may include whether the couple's relationship is exclusive or so-called open, and what kind of rules and understandings are in place.

If one partner is HIV-positive and the other isn't, it opens a discussion about condom use and the importance of getting the positive partner on an antiviral regimen to lower the amount of HIV in his system — and his risk of transmitting the virus. It's called treatment as prevention.

And the conversation might turn to whether the negative partner should consider taking an antiviral pill that lowers his risk of infection, an approach called pre-exposure prophylaxis, or PrEP.

Testing Together is aimed at dispelling a dangerous myth that helps explain why there are still around 50,000 new HIV infections a year in this country.

"The narrative, even within parts of the gay community, is that the epidemic is fueled by promiscuity," Sullivan says. That can lead men in committed relationships to have a false sense of security.

"But the current epidemic patterns are not driven by promiscuity," Sullivan says. "The face of the epidemic is quite different than it was before. So we need to be providing prevention services where the risk is occurring."

Sullivan, a researcher at Emory University, says the math of sexual relationships makes that clear. "Men with a main partner have sex with that partner about 100 times a year — about the same as male-female couples do with their main partners," he says.

But about a fourth of male-male couples have open relationships that allow for occasional encounters with someone outside the couple. That's a little bit higher than heterosexual couples, according to Sullivan.

Sullivan says if one partner in a gay couple is HIV-positive, there's a 40 percent chance the other one will become infected over time.

So far the results from Testing Together programs, funded up to now by the MAC AIDS Fund, bear out the importance of getting gay couples tested. About 10 percent of couples had one HIV-infected partner — but weren't aware of it. Sullivan says that's higher than the HIV-positive rate in most centers that offer individual testing and counseling.

Even when gay couples have agreed to be monogamous, Sullivan says, there are slips. "In surveys we did, about one-quarter of men said they had stepped outside their agreement in the prior year, and most did not tell their partners about it," he says. "As counselors, we all know this happens."

When the couple tests together, the counselor can defuse anger and focus the couple on how to deal with the news that one or both have become infected — or on how to stay safe in the future.

Sullivan says counselors might frame it this way: "You guys are a strong couple, with a clear commitment toward monogamy, but we want every couple to go out of here with a Plan B."