Accessibility links
A Toddler Remains HIV-Free, Raising Hope For Babies Worldwide : Shots - Health News The news that a baby born HIV-positive in Mississippi stayed HIV-free even though her mother stopped giving her anti-retroviral drugs sparked skepticism earlier this year. But a new report says that the girl is still virus-free at age 3. This could jumpstart a global study on super-early treatment of HIV-positive newborns. 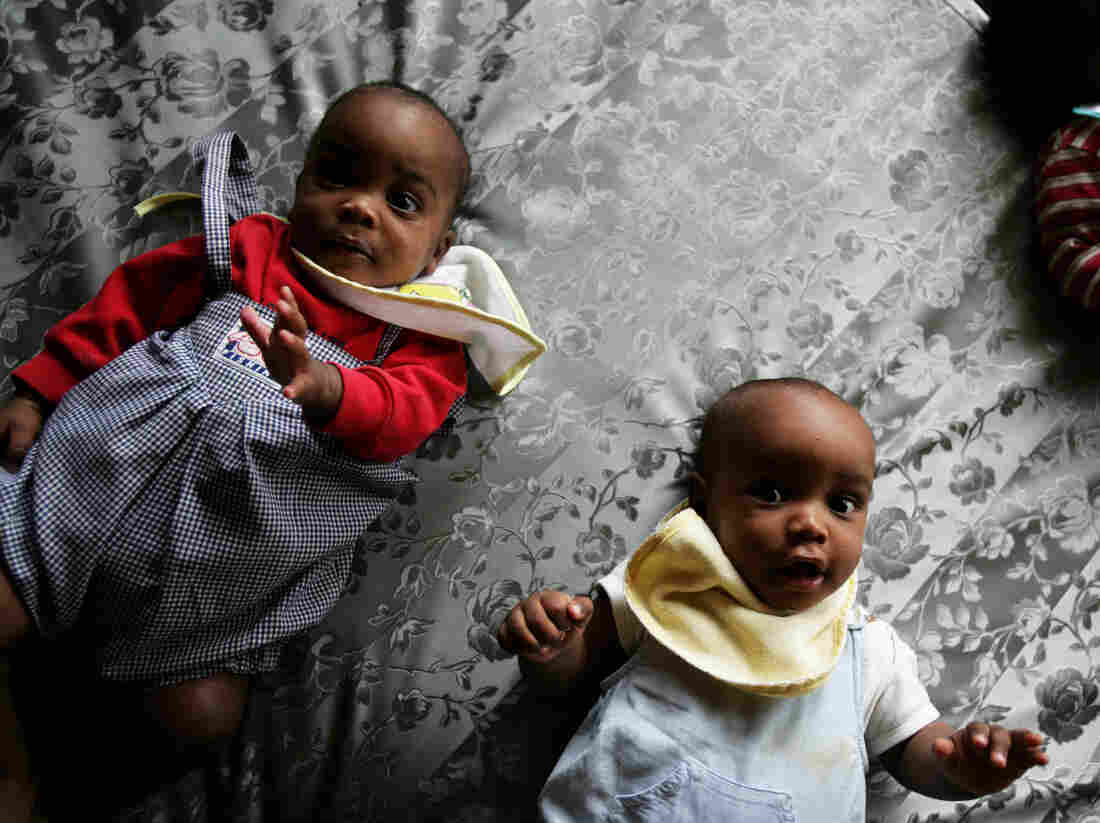 HIV-positive babies rest in an orphanage in Nairobi, Kenya. Treatment right after birth may make it possible for HIV-positive newborns to fight off the virus. Brent Stirton/Getty Images hide caption 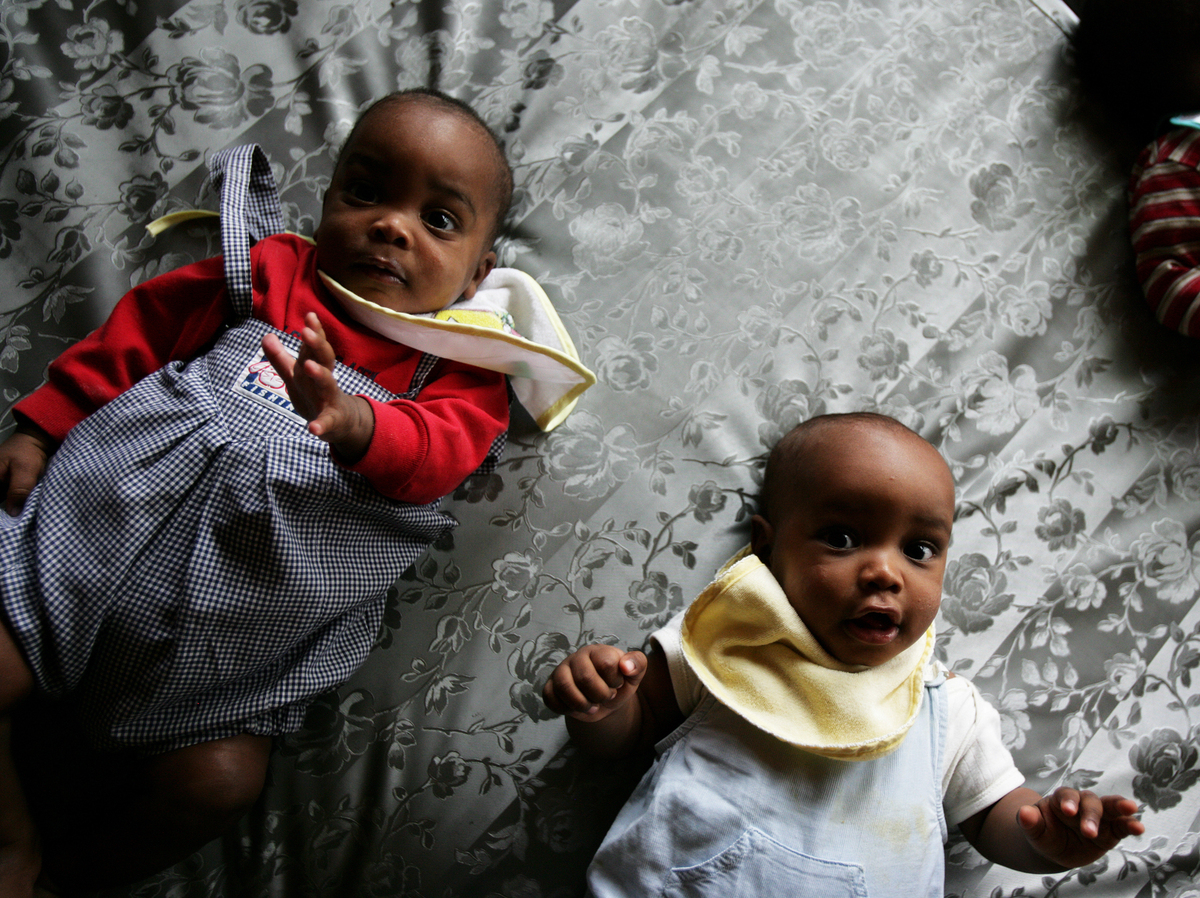 HIV-positive babies rest in an orphanage in Nairobi, Kenya. Treatment right after birth may make it possible for HIV-positive newborns to fight off the virus.

A 3-year-old girl born in Mississippi with HIV acquired from her mother during pregnancy remains free of detectable virus at least 18 months after she stopped taking antiviral pills.

New results on this child, published online by the New England Journal of Medicine, appear to green-light a study in the advanced planning stages in which researchers around the world will try to replicate her successful treatment in other infected newborns.

And it means that the Mississippi girl still can be considered possibly or even probably cured of HIV infection — only the second person in the world with that lucky distinction. The first is Timothy Ray Brown, a 47-year-old American man apparently cured by a bone marrow transplant he received in Berlin a half-dozen years ago.

This new report addresses many of the questions raised earlier this year when disclosure of the Mississippi child's case was called a possible game-changer in the long search for an HIV cure.

"There was some very healthy skepticism," Dr. Katherine Luzuriaga, a professor at the University of Massachusetts in Worcester, tells Shots. She's part of the team that has been exhaustively testing the toddler's blood and considering every possible explanation for her apparently HIV-free state.

Luzuriaga is confident the latest tests prove that the child was truly infected with HIV at the time of her birth — not merely carrying remnants of free-floating virus or infected blood cells transferred before birth from her mother, as some skeptics wondered.

The UMass researcher says there's no way the child's mother could have contributed enough of her own blood plasma to the newborn to account for the high levels of HIV detected in the child's blood shortly after birth.

Similarly, Luzuriaga says, new calculations show that the mother "would have had to transfer a huge number of [HIV-infected] white blood cells to the baby in order for us to get the [viral] signal that we got early on."

Clinching the question as far as the researchers are concerned is the infant's response to anti-HIV drugs that she began receiving shortly after birth. The remarkable earliness of her treatment is a crucial feature that makes this child different from almost any other.

"There's a very characteristic clearance curve of viruses once we start babies on treatment," Luzuriaga says. "The decay of viruses we see in this baby is exactly what we saw in early treatment trials from 20 years ago when we initiated anti-retroviral therapy and shut off viral replication. That's a very different decay curve than you would expect if it were just free virus transferred to the baby."

It might be helpful to recap the unusual, if not unique, features of the Mississippi case.

Her mother did not receive prenatal care, so she was not identified as HIV-infected before delivery. If she had been, she would have received drugs that are highly effective in preventing mother-to-child transmission of the virus.

While the mother was in labor, she got HIV testing, as is routine for women without prenatal care. When that came up positive, Dr. Hannah Gay, a pediatrician at the University of Mississippi Medical Center in Jackson, was ready to test the newborn for infection and start anti-retroviral medicines within 30 hours of birth.

The treatment quickly cleared the virus from the baby's blood. Normally such children would stay on antiviral drugs for a lifetime. But in this case the mother – whose life circumstances were reportedly chaotic – stopped giving the child the medication between 15 and 18 months after birth.

Gay and her colleagues caught up to the child when she was 23 months old and were astonished to discover she was apparently still virus-free despite being off treatment. Five rounds of state-of-the-art testing — at UMass, Johns Hopkins, federal research labs and the University of California San Diego — failed to reveal any trace of the virus in her blood.

That led to last spring's report and widely reported hope that the child had been cured of HIV.

But Dr. Scott Hammer, an HIV researcher at Columbia University in New York, is not quite convinced. "Is the child cured of HIV infection? The best answer at this moment is a definitive 'maybe,' " Hammer writes in a New England Journal editorial that accompanied the report.

The reason is that a couple of tests done when the child was about 2 years old found indications that her system may contain pieces of RNA or DNA from HIV. This hints that some of the nucleic acid building blocks of the virus are hanging around within her blood cells.

There's no evidence these "proviral" remnants are capable of assembling themselves into whole viruses that can make copies of themselves. But researchers are concerned about that possibility and how it might be headed off.

"The question is whether those viral nucleic acids have the ability at some point to replicate and allow a rebound of the virus," Luzuriaga acknowledges. "That's why it's important to continue to test the baby over time." She says that means years.

But for now, the signs from the Mississippi child's case are encouraging enough to have generated an ambitious global human experiment that Luzuriaga says is in final planning stages.

Women who present in labor without having had prenatal care will be tested for HIV and, if positive, their infants will be intensively treated within a couple of days of birth, as the Mississippi child was. Then they'll be followed with the most sensitive tests to determine if the virus has been eradicated.

If certain criteria are met, researchers plan to decide whether it would be safe to discontinue HIV treatment deliberately and follow the children closely to see if the virus returns. (If it did, treatment would be restarted.)

If the experiment succeeds, it would be a huge advance in the prevention of childhood HIV and AIDS in many parts of the world. More than 9 out of 10 of the world's 3.4 million HIV-infected children live in sub-Saharan Africa, where many women deliver without having had prenatal care or HIV treatment. Around 900 children are newly infected every day.

Meanwhile, researchers pursuing an HIV cure will convene next month in San Francisco to consider various strategies — for adults as well as children. One other recent glimmer of hope was provided this summer by Boston researchers who reported that two HIV-infected men with lymphoma remain virus-free without treatment for several months after stopping antiviral treatment.