Accessibility links
Why Postponing Insurance Mandate Is No Easy Fix For Obamacare : Shots - Health News One of the big questions now is what will happen if the federal health insurance website can't be fixed soon. Will the government penalize people for not having insurance if they couldn't realistically buy it? 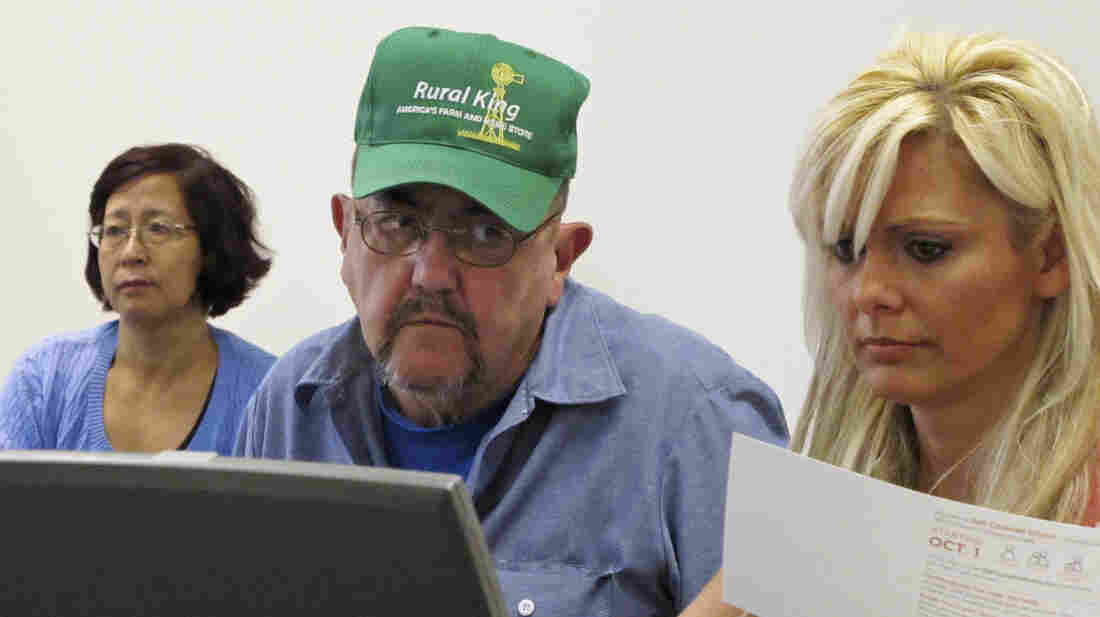 Patrick Lamanske, of Champaign, Ill., works with Amanda Ziemnisky (right), of the Champaign Urbana Public Health District, to try to sign up his wife, Ping, for health coverage through the Affordable Care Act on Oct. 1. David Mercer/AP hide caption 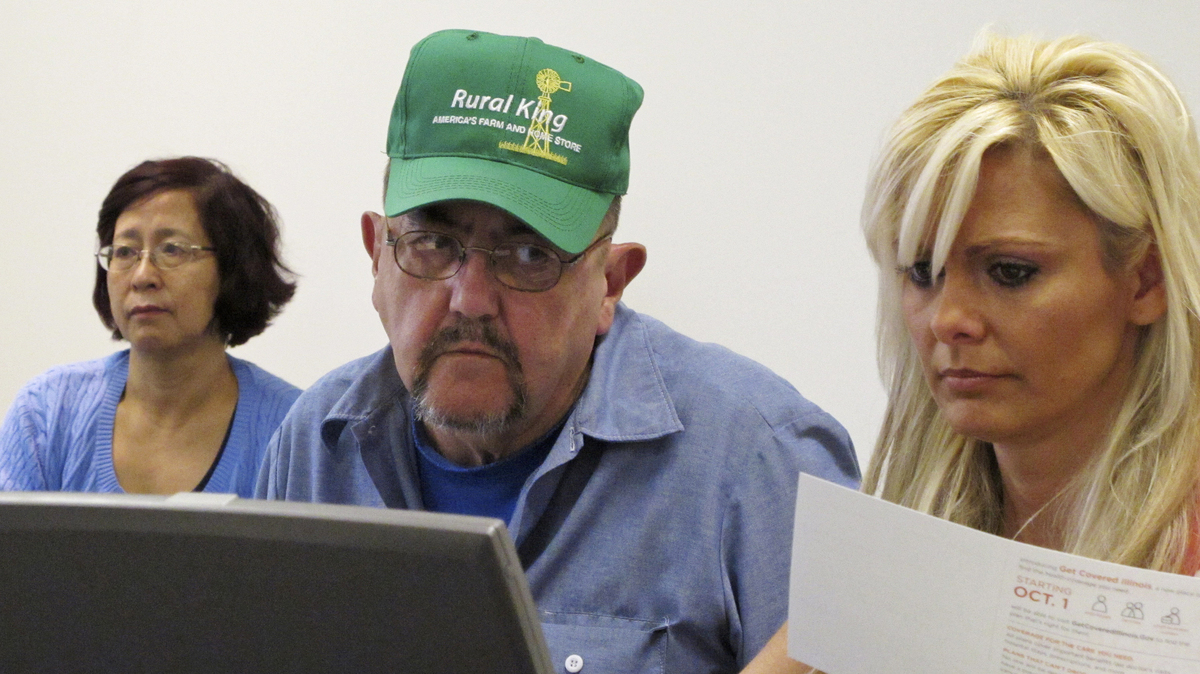 Patrick Lamanske, of Champaign, Ill., works with Amanda Ziemnisky (right), of the Champaign Urbana Public Health District, to try to sign up his wife, Ping, for health coverage through the Affordable Care Act on Oct. 1.

The Obama administration has entered full damage-control mode over the balky website intended to enroll people in new health plans under the Affordable Care Act.

Senior officials met Wednesday morning with Democrats on Capitol Hill, and in the afternoon insurance CEOs got an audience at the White House. Tomorrow some of the private contractors responsible for building the website, HealthCare.gov, will testify at a House committee hearing.

One of the big questions now circulating concerns what will happen if the website can't be fixed soon. Will the government really penalize people for not having insurance if they can't realistically buy it?

Technically, people are supposed to have coverage starting Jan. 1, 2014. But there's a 90-day grace period, meaning you actually have until the end of March, which is also when the current open enrollment period ends.

Even the administration says it wants to fix this. At a briefing Monday, White House spokesman Jay Carney said, "In terms of the Feb. 15 date that you just mentioned, there's no question that there's a disconnect between open enrollment and the individual responsibility time frames in the first year only. And those are going to be addressed."

And if that mismatch does get changed, it would give people an additional month and a half to sign up without risking a penalty — and without extending the existing open enrollment date.

But what about the possibility of extending the enrollment period, which even some Democrats are now calling for if the website isn't fixed soon? Or of waiving the penalty for the first year?

That's where you start to run into big issues with the insurance companies that are offering these products in the exchanges. They set their premiums based on the rules as they're written — that healthy young people would be strongly encouraged to sign up by the prospect of a penalty, and that they would be encouraged to sign up within this six-month window.

As one insurance industry representative said today, "If you change the rules, insurers are going to want to change their premiums" to reflect the possibility that fewer healthier people may sign up.

The other big problem is timing. Stretching out open enrollment past that March 31 deadline starts to bump up against planning for 2015. Insurance companies have to start submitting premiums for that next year starting in April, insurance officials say, so they really need to know who's signed up for the current year by the end of March.